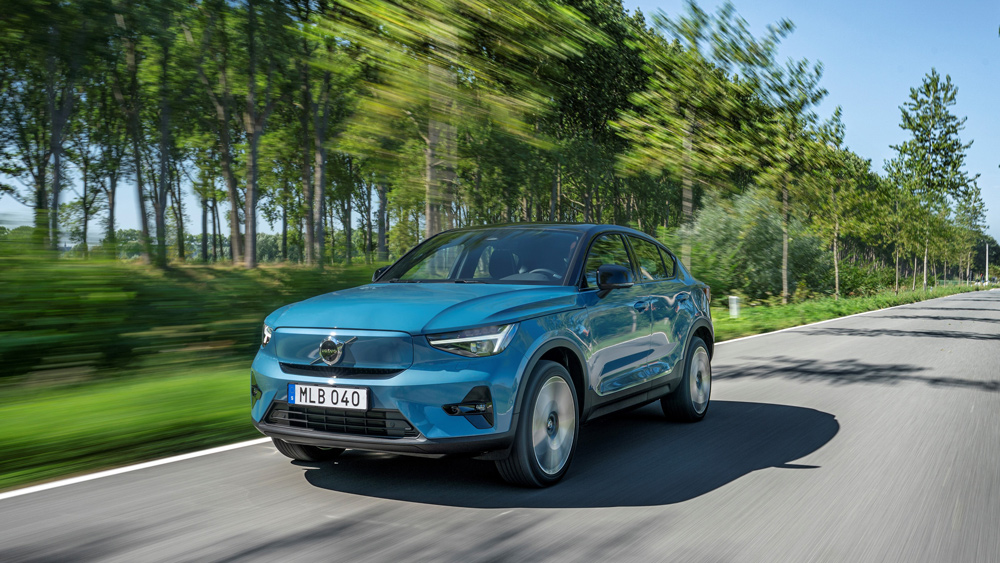 Photo: Courtesy of the Volvo Group.

The morning sky is still dark when we climb into the new Volvo C40 Recharge in the Belgian city of Ghent. There are as many bicycles as cars in this university town, making for a crawling commute on the narrow, medieval-era streets. But Volvo’s all-electric compact crossover seems at home in this urban stop-and-go as we creep past flocks of tourists and students, the scent of melted chocolate and baking waffles wafting through the air.

The 2022 Volvo C40 Recharge is among the initial steps toward the Swedish marque’s commitment to go completely electric by 2030. Based on the XC40 SUV and built on the CMA platform jointly developed by Volvo and parent company Geely, the C40 uses twin electric motors—one on each axle—for a total of 402 hp and 487 ft lbs of torque, while a 78 kWh battery pack gives it a range of up to 255 miles. It will be built here in Ghent at a Volvo assembly plant about 20 minutes north of the city center where the XC40 and V60 also roll off the line.

Volvo’s battery electric vehicle (BEV) comes at a time when the company has just gone public on the Swedish stock exchange. Beforehand, Geely announced a valuation for the IPO of up to $23 billion, despite the ongoing chip shortage, which caused Volvo sales to drop 30 percent in September. By the time trading commenced, however, Volvo had scaled back that figure to $18 billion. Nonetheless, the automaker is poised to become a serious contender in the EV space, touting its safety record and image of long-standing reliability to differentiate itself over relatively new sister company Polestar.

The C40 Recharge clearly shares DNA with the XC40 but has its distinct characteristics. “Typical Volvo design language is to treat the form of the car as a solid mass, then we carve away to create negative surfaces,” explained Robin Page, Volvo’s design director, in a conversation with Robb Report when the model was revealed earlier this year. The fastback shape is topped with a black roof, which disguises the vehicle’s height and emphasizes a sleek silhouette. “That really symbolizes this is a full electric car and gives it a nice graphic, too,” Page mentioned. And as a nod to Volvo’s heritage, thin segmented vertical taillights run down the back of the car.

Since electric vehicles have no need for a traditional front grille, designers often grapple with how to maintain the identity of a brand without slapping on the same parts from a gas-powered car. In the case of the C40, designers removed the grille frame to create a flush and more modern-looking face, with parking and radar sensors almost invisibly integrated into the Volvo emblem, or “iron mark.” New headlights use pixel technology (also found on the Polestar 2) with more of a curvature to the lens and the “Thor’s hammer” lighting signature. Page points out a character line that runs from the front of the car, up the A-pillar, and along the roof profile, before turning back on itself into the glass. “This line is from our heritage, which is the P1800 from the 1960s. So, it’s a little link to our history but done in a nice modern way.”

Once we’re out of town and onto the highway, we mash the pedal of the C40 to the floor and feel the instant torque from the electric power train, which, according to the manufacturer, allows the C40 Recharge to cover zero to 60 mph in 4.5 seconds. The ride is smooth and linear, with some noise from the Euro-spec tires wrapped around 20-inch wheels, although we’re told the Recharge examples that are arriving Stateside will get a cushier set of rubber. In city congestion and on the open road, Volvo’s Pilot Assist takes over braking and accelerating duties and keeps the car centered in its lane. It also alerts drivers of any hazards, such as kamikaze bicyclists that might dart across traffic. And while some semi-automated driving systems follow too far back, the Volvo’s following distance (at its closest setting) is just enough to be safe without inviting neighboring cars to cut you off.

The grille frame has been removed to create a flush face, with parking and radar sensors integrated into the Volvo emblem.  Photo: Courtesy of the Volvo Group.

When it comes to the driving experience, Volvo’s approach is to keep it simple. There aren’t multiple drive modes or settings like on the Polestar 2 we recently drove back in the States. Instead, the C40’s only options are “off-road” and a stiffer steering feel (the latter of which we found doesn’t significantly enhance handling). There is no adaptive suspension offering, but the fixed setup keeps us comfortable on straight highways and gently curving country roads. As with many electric vehicles, the C40 Recharge offers one-pedal drive (lifting off the accelerator scrubs enough speed to negate use of the brake pedal), which feels much more aggressive than on the Ford Mach-E GT we drove the week prior. And while the Volvo’s one-pedal setting isn’t adjustable like on the Polestar, you can turn it off completely for a more traditional feel.

Volvo is meant to be a different animal from Polestar, however. “Polestar is meant to be more engineered, while Volvo’s efforts are more inspired from nature,” says Rekha Meena, Volvo’s senior color and trim manager. For example, the C40 Recharge launch color, Fjord Blue, was inspired by those glacial bodies of water in Sweden. “It’s very different from the color of the ocean,” Meena says. “We don’t do a bunch of colors just to do them, they each have to have a meaning.”

In the cabin, patterned backlit trim was created from scans of Sweden’s topography. Lightweight vegan materials underscore the focus of Volvo designers on weight reduction and sustainability. “Electrification is about range, so we need lighter materials,” notes Meena. The micro-velour on the C40 seats is made from 92 percent recycled polyester, and each C40 uses 71 recycled plastic bottles. In addition, Volvo recently announced that it would offer only animal-free interiors in all of its fully electric vehicles, and that it’s aiming for 25 percent of the material in its new cars to come from recycled and bio-based sources by 2025.

The micro-velour on the seats is made from 92 percent recycled polyester, and each C40 Recharge uses 71 recycled plastic bottles.  Photo: Courtesy of the Volvo Group.

New for the C40 is an infotainment system powered by Google, including its voice-activated assistant and Google Maps. For the most part, it’s an improvement over the current Volvo interface, although we had some issues with Google Maps redirecting us from the more circuitous, set drive route onto faster highways (a Volvo representative tells us this can be remedied by setting specific waypoints). Also, Apple CarPlay is not currently supported, but we’re told it will be available at a future date via an over-the-air update.

The C40’s infotainment system is powered by Google and includes its voice-activated assistant and Google Maps.  Photo: Courtesy of the Volvo Group.

Starting at $58,750, the 2022 Volvo C40 Recharge is priced lower than the Tesla Model X and luxury EVs such as the Jaguar iPace and Audi e-tron. The model is more in the neighborhood of the new Ford Mach-E GT, which offers a sportier drive and more range, albeit a less elegant interior. Orders for the C40 Recharge are open now, with deliveries in the US expected to begin during the first quarter of next year.