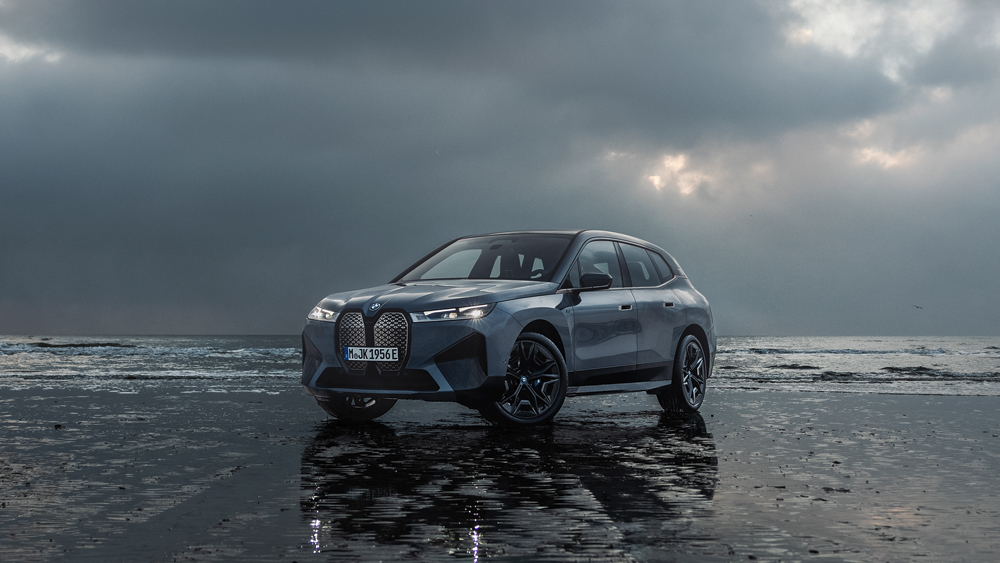 It’s a balmy fall afternoon in Northern California’s Anderson Valley, a perfect day for a drive. The lithium-ion battery is fully charged, there is hardly a car on the road and I have all the time in the world to wind my way home to San Francisco. But there’s a lot on my mind. First, what am I going to do with the trunkful of heirloom onions and potatoes I’d just bought on impulse at Brock Farms? Second, and more pertinent, what is it, exactly, about the BMW iX M60—the high-performance, all-electric sports activity vehicle in whose capacious trunk said produce resides—that is so utterly captivating?

When BMW Group’s design director Adrian van Hooydonk introduced the iX, he said the project began with a discussion of the new vehicle’s interior atmosphere, and drawing inspiration from modern architecture, the design team sought “to create something like a loft on wheels.” That might sound odd, and particularly so when it comes to the iX’s M variant. For how, precisely, does one reconcile the idea of coolly minimalistic interior design with the propulsive force of an M-specific, dual-motor drivetrain which delivers 610 hp and spools out 811 ft lbs of torque?

It all depends on personal taste, of course, and also on what one makes of the fact that automotive designers and engineers are deeply rethinking what cars should look, feel and act like as the industry pivots to an all-electric and increasingly computer-aided future. But as I ease myself into a driver’s seat clad in animal-free SensaTec leather, and consider the spare yet sumptuous interior that seems all the more spacious thanks to the conspicuous absence of a transmission tunnel, it all makes perfect sense. After all, the BMW M badge is synonymous not only with performance, but with luxury, and these days, notions of luxury are increasingly intertwined with the quest for tranquility, rejuvenation and meditative retreat.

Slicing east along Highway 128 in the iX M60’s silk-smooth Efficiency mode (to make the most of its 280-mile EPA-estimated range), I dial up a lumbar massage on the faceted glass iDrive controller, which is set rather ingeniously into an attractive wooden surface with its own discrete touch functionality. And while there are a multitude of ways to connect with the iX M60’s brain—among them, gesture control, the speech-activated BMW Intelligent Personal Assistant and the elegantly slim, horizontal touch screen—I find myself returning time and again to the glass-and-wood controls for their sheer tactile satisfaction.

At 60 mph, the iX M60 is whisper quiet. The only sounds are the soft luffing of wind over a body whose drag coefficient is a mere .26, and the muted whoosh of the Pirelli P Zero tires—wrapped around 21-inch wheels—licking the pavement. As the curves come, the ride remains just as serene thanks to ultra-precise steering and a unique, M-enhanced adaptive dual-axle air suspension that responds to lateral and longitudinal acceleration, road speed and steering angle within milliseconds.

It is precisely that kind of silence and serenity which, even in a cavalcade of twisties, free the mind to wander, perhaps to questions of a philosophical nature. For instance, if you crank up the Bowers & Wilkins Diamond Surround Sound System so high that your seat starts to throb like a subwoofer, does the additional electricity consumption have an appreciable impact on driving range? Or, if the iX M60’s head-up display can sense a patch of uneven pavement half a mile ahead, might it one day be able to alert you to the presence of a herd of deer at the same distance?

All such ruminations come to an end, though, as I approach the freeway on-ramp. Switching to Sport and flipping on IconicSounds (a simulated engine soundtrack created by Academy Award–winning composer Hans Zimmer in collaboration with BMW’s Creative Sound Director Renzo Vitale), I prepare myself for a sensory rush.

Applying heavy throttle, a ridiculously gratifying digital “WHOOOOOOM!” floods the cabin, and the iX M60 surges forward like a beam of light. I can only imagine the effect on a driver glancing in the rearview mirror and catching sight of this vehicle’s gargantuan kidney grille closing in on them at full tilt. Yet that’s to be expected from a vehicle wearing the M badge. The iX M60, however, is a step beyond. It’s what happens when designers and engineers are allowed to pursue their collective vision, which, in this case, is a high-performance family hauler that feels future proof.