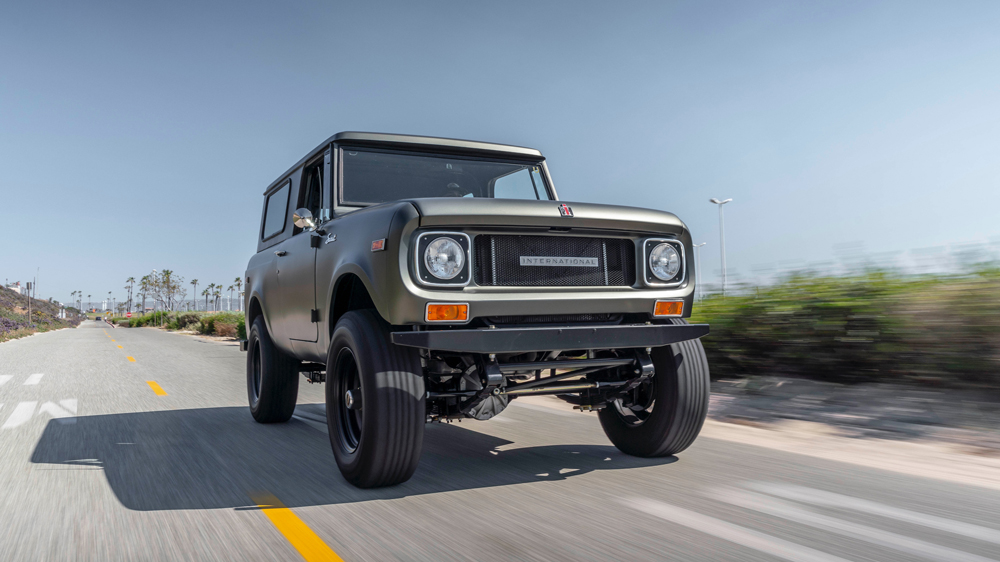 The Volkswagen Group recently revealed plans to build a new all-electric SUV that revives the Scout nameplate for the modern era. News of this caused an immediate uproar among fans of the original who doubt that boxy concept sketches can ever hope to live up to the burly machines made by International Harvester. Amid the din emerged apt comparisons to Ford using the Mustang moniker on a four-door electric crossover—a play that clearly capitalized on the original pony car’s popularity, as does Volkswagen Group recycling the name of one of the world’s first true SUVs.

Today, most original International Scouts benefit from increasing values as collectors hunt for classic utility vehicles not named Bronco or K5 Blazer. Meanwhile, a new crop of restoration houses increasingly prize the Scout as a foundation for projects that marry potent performance with the modern creature comforts that clients have come to expect. Bulletproof Restorations is among the frontrunners in this category, dropping any number of General Motors small-block engines and modern automatic transmissions into revitalized chassis, then installing all the requisite interior and exterior details to justify price tags that start near $150,000.

Bulletproof founder Jake Barba considers his company something of a semi-retirement project. After paying another shop to restore a Scout he bought on the cheap about a decade ago—an alternative, at the time, to paying already inflated Bronco values—the result turned out so shoddy that Barba ended up taking on the job himself. The story then weaves through Los Angeles–based International Scout group meets, organized on social media, to fixing up other botched restorations for friends and, eventually, officially launching Bulletproof in 2019.

Rebuilt but not rethought, Bulletproof’s reimagined Scout still employs an original International Harvester box frame—albeit with any rust concerns ameliorated before the mechanical work commences. Barba uses his own 1975 example as a daily driver around the City of Angels, but for clients who ask him to source and build a new truck, he runs them through their intended use cases before suggesting a new power-train configuration. Will they mostly use their Scout as an urban commuter, vacation cruiser—conscripted for towing—or off-road explorer?

The naturally aspirated 5.3-liter V-8 in Barba’s personal Scout—wearing the popular grille from 1972—routes power to the rear or all four wheels through GM’s popular 4L80E automatic. He actually prefers to work with the more robust 6L80E, though, which even allowed for tiptronic sequential shifting in one special project. The mill’s prodigious low-end grunt shows up with even the slightest touch of throttle. Flooring the pedal, however, handily chirps the rear wheels thanks to a Positraction limited-slip differential housed in a beefed-up Ford 9-inch rear end.

Bulletproof’s trucks far eclipse the original Scout’s factory specs. The Ford 9-inch pairs with a Dana 44 axle up front, in this case equipped with an e-locker and manually locking hubs from Warn. Hiding behind the forged-aluminum Titan7 wheels (which Barba needed to have built specifically for Bulletproof to fit the Scout’s hub bore), are hydroboost-assisted brakes that replace the original vacuum setup and, despite still using drums at the rear, slam his Scout’s BFGoodrich mud-terrains to a stop with ease.

Pricing for one of Bulletproof’s reimagined Scouts starts at close to $150,000.  Bulletproof Restorations

Painstaking attention to detail is paid by Barba and team when it comes to the drive experience elicited from the steering and brakes, given that Bulletproof clients might be more accustomed to modern super SUVs complete with fully independent suspension, ABS and driver aids like lane departure assist. But the entire point here is the radically retro feel of a Scout restomod’s solid axles and leaf springs at all four corners.

That borderline oversquare chassis and taut suspension setup create a time warp behind the thin-rimmed steering wheel (now power-assisted to make city driving much more pleasant). After hopping out of modern SUVS, supercars or, equally likely, air-cooled Porsches reimagined by the likes of Singer, Bulletproof customers are enamored by the fact that their Scouts still induce the immediate sense of rugged capability tied to International Harvester’s utilitarian legacy.

That echo from the past shines through mechanically, but most of Bulletproof’s tidier details hint at the customer base’s priorities. Alcantara used by Ferrari pairs with Porsche’s Pepita (think houndstooth) for the dash and seats, respectively, while hand-stitched leather adorns the floor from pedal box to cargo mat. And the headlight lenses feature nearly invisible etching that reads “Bulletproof.”

Craftsmanship apparent only to the discerning eye plays a big role in Barba’s vision. A modern sound system is sequestered behind vintage-style controls. Air conditioning that blows ice cold is, of course, a must. These reenvisioned Scouts are equally at home jouncing over speed bumps, burbling past coffee shops or hustling through the canyons of Malibu—even if most will likely never see a rutted trail again.

In our tester, Alcantara used by Ferrari pairs with Porsche’s Pepita for the dash and seats, respectively.  Michael Van Runkle

Barba will happily add anything and everything that his clients request, with some builds escalating past the $200,000 figure. Yet he always prioritizes finding old trucks in the best condition possible to reduce the need for rust remediation before the real fun starts. About half of his customers request to have their own Scouts revamped, which gives those that do a chance to more fully experience the Bulletproof transformation.

For most clients, a Scout restomod represents just one six-figure classic in a collection, so Bulletproof also works on their air-cooled Porsches and classic Corvettes, offers space for hand-detailing G-Wagens and has even brokered deals for more modern rarities, including a Ferrari LaFerrari and a couple of new Ford Bronco DR factory racers. But until Volkswagen’s new EV hits the scene and ratchets up awareness for the International Scout, it’s a safe bet that anyone pulling up to a local Cars and Coffee in a Bulletproof build will always turn the more knowledgeable heads faster than any by-now-ubiquitous Bronco or K5 Blazer.