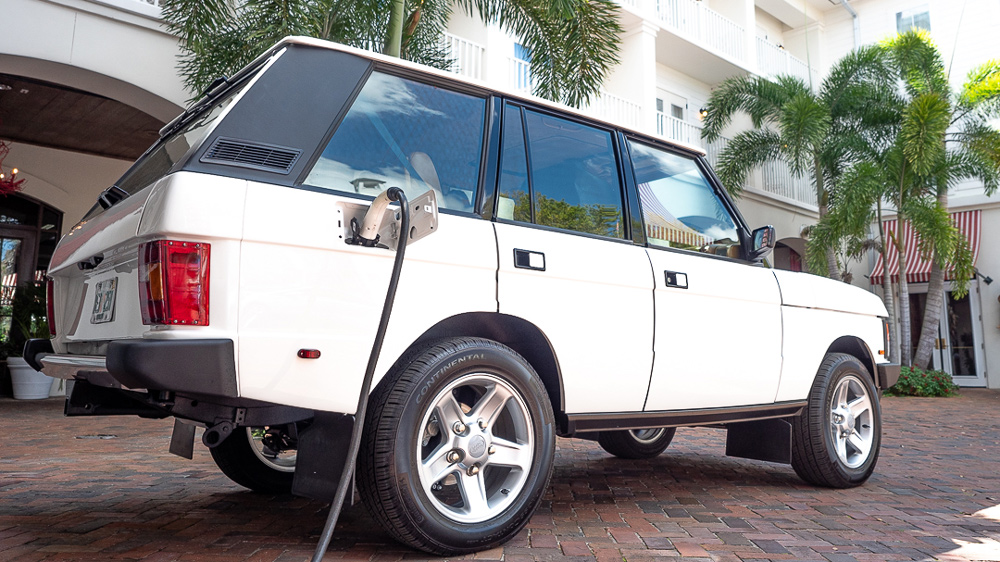 With my foot fully into the throttle, my back is glued to the diamond-quilted leather seats, hands gripping the wood-grain steering wheel. This sort of neck-snapping power is certainly not the norm for a conventional, circa-1990s Range Rover; it’s more what one would expect from a Tesla Roadster. Then again, the torque-on-demand dynamics does come from a Tesla Direct Drive EV power train which has been packed into this restored Range Rover Classic—a case of restomod meets retro-rocket.

Few automobiles (excepting, perhaps, some of Porsche’s air-cooled 911 variants) seem to inspire more restomod fever than those from Land Rover’s stable of Defender and Range Rover models. The demand is understandable: Just as nature abhors a vacuum, so too does the US automotive market, at least when it comes to the Defender, which stopped being sold Stateside in 1997 and went through a global hiatus from 2016 until the new, redesigned Defender appeared last year.

Since 2013, Florida-based E.C.D. Automotive Design has been among those at the forefront of reimagining Britain’s utilitarian masterworks. After electrifying the Defender in 2020, it has now given the Range Rover Classic a similar treatment, a welcome jolt into the future for a vehicle born just one year after we landed on the moon.

“States are going to dictate that gas is going to become a thing of the past,” says Scott Wallace, co-founder of E.C.D. Automotive Design. “But I think the real driver for us is just the innovation side. More than the business reason for electrification, it’s based on a passion to do everything better.”

An expat Brit, Wallace is a longtime automotive enthusiast and venture capitalist who joined up nearly a decade ago with brothers and fellow countrymen Tom and Elliot Humble. Tom and his wife Emily emigrated to Florida from across the pond and began selling older Land Rovers on the side, after discovering a surprising amount of interest in what they viewed back home as workhorse farm trucks.

As the story goes, Tom, Elliot and Scott were daydreaming about their ideal jobs over a few beers when the idea of starting a restoration house was tossed around. What Wallace didn’t expect was for Tom to quit his full-time job the very next day, and for the younger Elliot to abandon university so they could focus on the new collective goal. At that point Wallace went all in, and the automotive atelier in Kissimmee officially opened its doors.

“Our joke is that Tom has a vision and Elliot and I do it,” Wallace says. “It’s a really good mix of skill sets, and we rarely share the same. I think we have three minds that create one good brain for business.”

Part of that winning model is a painstaking attention to detail, which becomes evident during my time behind the wheel of the electric Rover. The example is still very much in its shakedown phase of development—Tom drove it for the first time roughly 24 hours prior—and, riding shotgun, he points out some chassis vibration that’s not only barely perceptible to me, but widely assumed to be part of the classic’s character. But for Tom it’s a glaring issue, one he plans to have addressed before the client takes delivery.

Piloting the all-electric Range Rover Classic on the roads of Kissimmee, Fla.  Photo by Tom Humble.

I’m more mesmerized by the immaculate detailing, including the collection of traditionally styled circular gauges complemented by the vast custom dash which is presented in a rich wood finish accented by trim that’s patterned to resemble carbon fiber. The entire interior, with seating dressed in Spinneybeck’s Pueblito Tan leather, presents an authentically 1990s aesthetic belied only by the Alpine Halo9 touchscreen with Apple CarPlay, Bluetooth functionality and a back-up camera.

Another contemporary addition is the push-button controls for Start, Reverse and Drive that manage the 450 hp Tesla motor, fed by a 1,000 kWh battery pack with a reported 220-mile range. The motor and energy storage system were sourced from Richard Morgan and his team at Electric Classic Cars (ECC) in the UK.

“We first got introduced to ECC when I was looking for a kit for the Mini I was rebuilding,” notes Elliot. “We had seen that they had done a Defender, and that sparked our interest.” To Wallace it seemed like kismet: “Richard is very similar to us three, and that was important. We didn’t want to get into a corporate partnership. We had a call, he liked us, we liked him—it was like dating.”

The relationship has resulted in a Range Rover with library-quiet operation, near-instant throttle response and a touted 5.2-second 0-60 mph acceleration. The overall drive experience is not unlike what I imagine from a hovercraft: Despite the stock suspension, there is a definite sensation of floating. It’s not the wafting of a Rolls-Royce Phantom, mind you, but the feeling of being airborne with a bit of turbulence. Chalk it up to the marginal chassis shimmer and slight lag between steering input and the translation to the vehicle’s 18-inch wheels shod in Continental Cross Contact tires. Plus, and it’s always worth remembering, this is a nearly 30-year-old vehicle—which, after all, is the main appeal.

E.C.D.’s latest electric entry, showcased in a glossy Alpine white exterior contrasted by silver metal bumpers and a black grille, is far more than a glorified farm truck. It’s a swank conveyance built for tomorrow’s emissions regulations without losing the stylistic authenticity of its period.

The initial project is a Southern California–based customer’s commission which represents more than 2,200 hours of labor in the 45,000-square foot “Rover Dome,” as the E.C.D. build site (and headquarters) is affectionately known. But personalization is the linchpin of the operation, the company’s rai​son d’être defined from one customer to the next.

“We have clients that ask us to build something that will sit in their car museum and never be driven, and then we’ve got people who want to use it as their daily [driver],” says Wallace, when asked about E.C.D.’s mission statement. It’s a mantra that’s certainly been given more juice by the recent foray into electrification. “Create it. Build it. Live it,” he says. “You create it. We build it. You live it.”