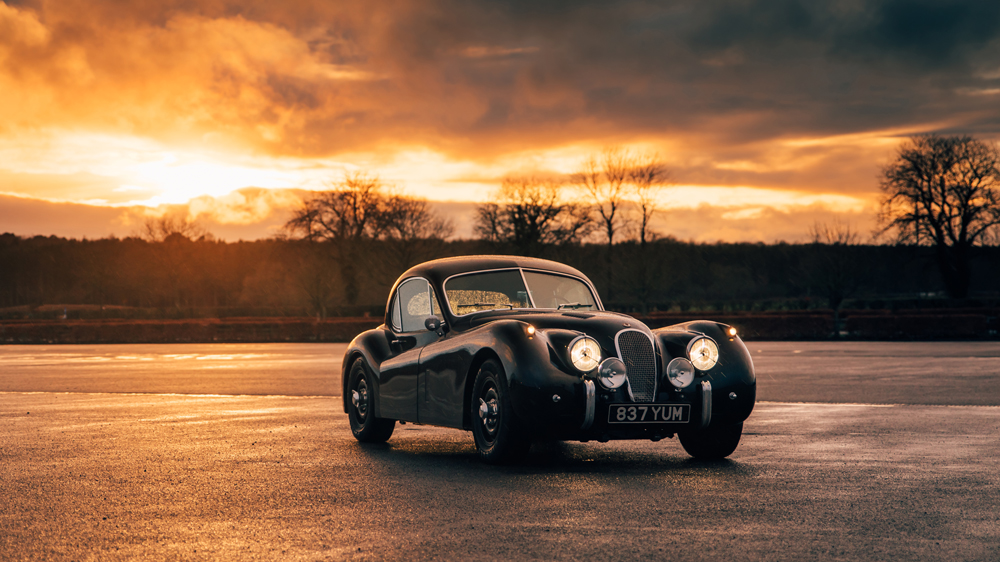 When David Lorenz watched Prince Harry and Meghan Markle drive away from their wedding reception in an electric Jaguar E-Type, it sparked an idea that would become an obsession.

The 34-year-old nightclub owner from London saw the potential for a future-proof business. His idea? Become the founder of Lunaz and convert some of the world’s finest classic cars to run on battery power.

“It was definitely an epiphany. I’d recently married and had a daughter. I wanted to do something that would make a difference but was also at the cutting edge of technology,” he explained.

His epiphany is why I’m hurtling along the country roads near Silverstone in an iconic Jaguar XK120 without a conventional engine. It’s raining the proverbial cats and dogs and I have no traction control but I’m not missing the soundtrack from a tailpipe one bit.

A Jaguar XK120 electrified by Lunaz.  Photo: Courtesy of Lunaz.

This is the first time anyone has been allowed to drive the car, apart from Lorenz and his business partner, Jon Hilton, the former technical director of Renault F1.

“I knew what I wanted to do but I had no idea how to do it,” says Lorenz from the passenger seat. “I’m not ashamed to say I stalked Jon until he finally agreed to get involved. It wouldn’t have happened without his automotive expertise.”

The English country lanes are waterlogged as I squeeze the XK between gigantic puddles. Prices start at $435,000 for a Lunaz XK conversion, and the potential for an embarrassing slide on this surface is immense.

An 80kWh battery pack and twin-motor—producing the equivalent of 375 hp—give the XK an instant turn of speed. The Jaguar powers to 60 mph from standstill in 5 seconds, or roughly 2 seconds faster than the original. And you can expect a range of 250 miles between charges.

There’s no denying that I enjoy the grumble of a classic Jaguar engine, but the sound of silence can also be equally compelling. The wind whistling across car’s iconic bodywork as we whir across the Northamptonshire countryside is strangely satisfying.

With its twin-motor configuration, the Lunaz conversion accelerates from zero to 60 mph in 5 seconds.  Photo: Courtesy of Lunaz.

With such immense power immediately available from the battery pack, the fact that there is no clutch or gearstick to battle with is soon forgotten. Sure, the Lunaz is twitchy and a handful in the wet, but no more so than the original.

The very thought of removing the original, 3.4-litre six-cylinder from Sir William Lyons’ perfectly formed XK120 will have traditionalists sobbing in their oily handkerchiefs. However, Lorenz and his team have retained much of the character elsewhere.

The car’s 80kWh battery pack allows for a range of 250 miles.  Photo: Courtesy of Lunaz.

The interior itself is a subtle blend of old and new, with original Smiths dials above a discreet satellite navigation screen and Bluetooth telephony. It smells like old school Jag, but now the driver can listen to Apple CarPlay.

The purists will hate it, of course, especially as a concours XK with a combustion engine is considerably cheaper. For others, charging headlong back to the future in a car like this will be an appealing and unique prospect.