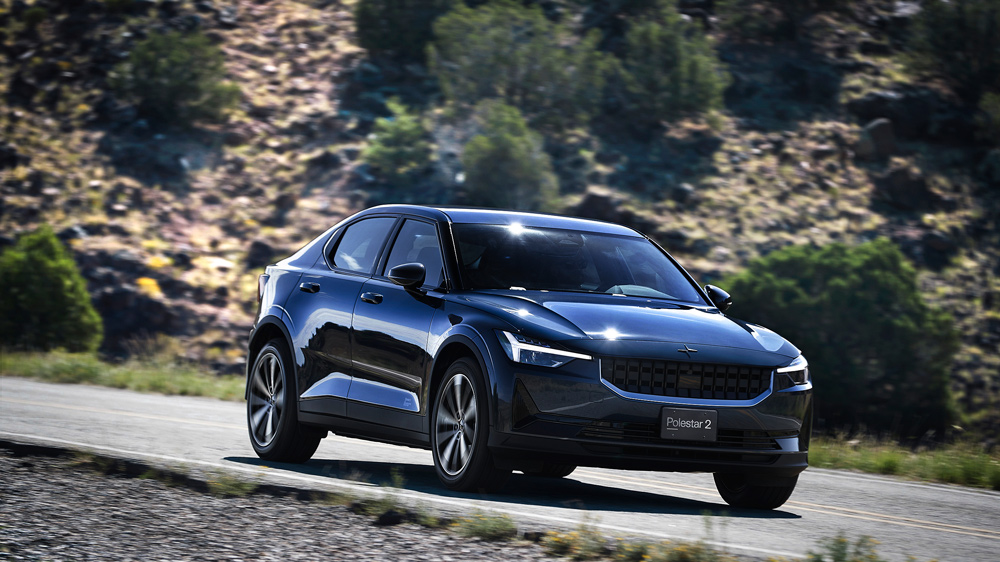 We liked the all-electric Polestar 2 from the moment we first saw it, and then we drove the original model and were truly enamored. Volvo’s luxury offshoot first turned heads with the Polestar 1 hybrid, and, more recently, the Precept concept, with its minimalist Scandinavian design, high-quality finishes and sustainable materials. Now, the 2022 Polestar 2 lineup expands with more offerings to entice current and perspective EV owners alike.

New this year is a long-range, single-motor model with 231 hp and the promise of 265 miles per charge. On a drive through New Mexico’s winding mountain roads from Santa Fe to Los Alamos, the front-wheel-drive Polestar 2 had no trouble climbing briskly to more than 7,300 feet, and did so while providing a comfortable and near-silent ride. Although electric motors lose some power at higher altitudes, EVs like the Polestar 2 don’t struggle to breathe like gasoline-dependent cars.

The 2022 Polestar 2 in New Mexico.  Photo: Courtesy of Polestar AB.

While it may not boast the fastest zero-to-60 mph time or the longest range among its competitors, the Polestar 2 has a cool, understated elegance that doesn’t scream for attention like the pig-snouted BMW i4. And Polestar’s superior fit-and-finish compares to anything Tesla has yet to offer. Starting at $45,900, it also undercuts the entry-level Tesla Model 3 and is just a slight price bump up from the Ford Mustang Mach E.

The dual-motor version of the Polestar 2 (which remains mechanically unchanged for 2022) makes 408 hp and 487 ft lbs of torque. It can post a zero-to-60 mph time of 4.4 seconds and, because of the electric motor on each axle, boasts a better weight balance than its single-motor counterpart. But more output means less range, as the dual-motor version is rated for about 249 miles.

Single-motor (shown here) and dual-motor versions have a range of 265 miles and 249 miles, respectively.  Photo by Patrick Daly, courtesy of Polestar AB.

Also introduced this year is a base model of the dual-motor variant that starts at $49,900, while on the other end of the spectrum is the Performance Pack option. The latter adds Brembo brake calipers, 20-inch wheels wearing sport tires, splashy yellow-gold seatbelts and other accent trim—all for an additional $5,000. Both models can also get a new blacked-out package which deletes the chrome trim, as well as the choice of a metal roof for hotter climates, in lieu of the standard glass.

On a jaunt up to New Mexico’s ski country, where the mountaintops are known by names like Deception Peak and Santa Fe Baldy, our dual-motor Polestar 2 rounded the corners of Hwy 475 with precision—until near-freezing temps near the summit had us tapping the brakes to avoid gravel and ice on our summer tires.

The cabin includes various textiles and vegan materials, although leather is still an option.  Photo by Paul Barshon/Beadyeye, courtesy of Polestar AB.

As with any EV, the Polestar 2 lacks the visceral experience of, say, an Audi RS 5 Sportback, with the rumble of its engine and direct connection to the road. Instead, Polestar offers a quiet, insulated ride with safety features borrowed from parent company Volvo, along with advanced driver systems such as adaptive cruise control and lane-keeping assist that help take the burden off the driver during those long hauls on the highway. Polestar’s Pilot Assist adds a lane centering/steering option, which worked well when the lines on the road were clearly marked, but switched off when we’d traverse well-worn surfaces.

The cabin includes various textiles and vegan materials, although leather is still an option for those who want to eat their cheeseburger and have it, too. The “weave tech” fabric on our test car was inspired by wetsuits, while a new 3-D-embossed option was modeled after knit athletic shoes.

The tablet-like display, featuring a new Google-based infotainment system with voice recognition, sits high enough on the center console that it’s fairly easy to see without looking down. Simply say “Hey Google” followed by a command or question to control vehicle settings, navigation locations and other functions. The Android-based system also works with an iPhone, and Polestar execs tell us that compatibility with Apple CarPlay and Amazon Alexa is on the way.

The 2022 Polestar 2 single-motor model is slated for dealerships this October, while the new dual-motor variant is expected to drop in late December or early January. Also included are three years of service and connectivity along with over-the-air updates.