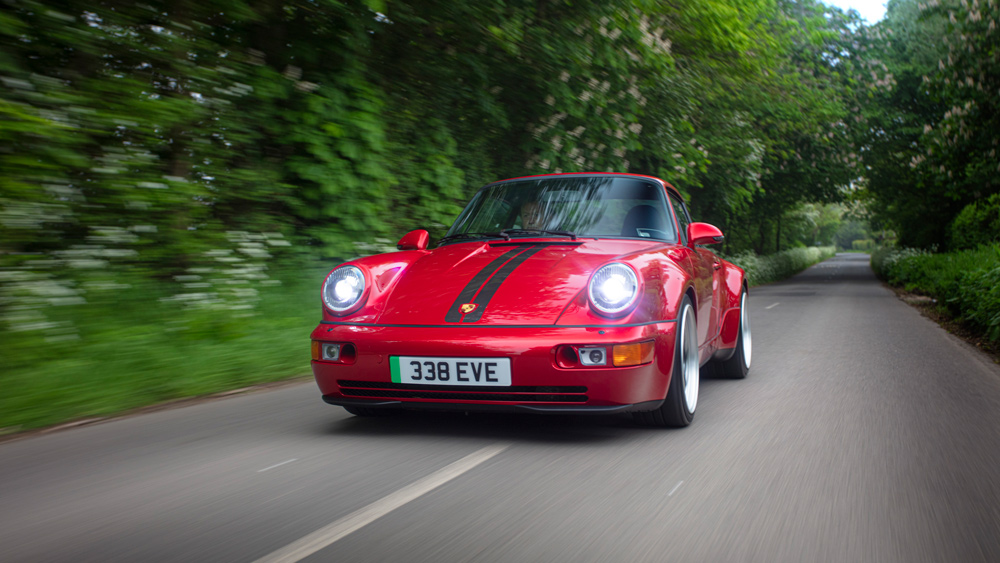 Driving the Porsche 964 Turbo, famed for its role in the movie Bad Boys, is like playing hacky sack with a hand grenade. Nothing happens until 3,200 rpm, then a drop-kick of boost can send you sideways into a ditch. The 360 hp, 3.6-liter power plant was the final act for the original “widow-maker,” before four-wheel drive finally tamed the Turbo. Fast-forward to the present and my sneaker hesitates over the throttle pedal of a reimagined 964 from Everrati Automotive Limited. How is a rear-driven version with 40 percent more power going to feel? Well, not as heart-stopping as I anticipated, actually.

With its full 369 ft lbs of torque from a standstill, the all-electric car delivers a controlled explosion, not a pull-the-pin blast. Acceleration is brutal, but seamless and near-silent. The Everrati Signature is a different kind of restomod, clearly, yet it offers more than just blistering speed. Against the odds, it also drives like a proper Porsche.

British tech entrepreneur Justin Lunny founded Everrati after watching the royal wedding of Prince Harry and Meghan Markle in 2018. “I lived opposite Windsor Castle and saw them leave the chapel in the electric Jaguar E-Type Concept Zero,” he reveals. “It was a lightbulb moment. I realized that, unless you spent $2 million on an electric hypercar, there weren’t any EVs aimed at drivers.”

Lunny, who has Porsches in the blood, has a Taycan Turbo S as his daily driver. And his director of engineering, Mike Kerr, owns an immaculate 964 Carrera 2. A 911 thus seemed a logical starting point for the company, which has since electrified a Land Rover Series II and Mercedes-Benz SL “Pagoda.” Everrati’s prototype was a 964 Targa with the 446 hp Large Drive Unit from a Tesla Model S. This new Turbo-look Signature Edition that I’m piloting, however, owes its heart transplant to the 507 hp Tesla Model S Performance system. “No factory-built 964 comes close,” quips Kerr.

The car can recharge from roughly 10 percent to 100 percent—using a CCS fast charger—in less than an hour.  Photo by Charlie B Photography, courtesy of Everrati Automotive Limited.

The price to build your own Signature Edition starts at around $400,000. A donor 964 (which Everrati can source on your behalf) is stripped to a bare shell, then eight lithium-ion batteries are installed in the front trunk, plus 16 others where the engine would usually be. The total battery capacity is 53 kWh with a real-world range of 150 miles, and it has the ability to recharge from roughly 10 percent to 100 percent—using a CCS fast charger—in less than an hour. Worried about having second thoughts? You can even take the Stuttgart flat-six engine home with you. “We supply it in a Perspex display case,” notes Lunny.

The wide-body 911 wears original 964 Turbo bumpers with RS Cup vents, but its carbon-fiber hood, fenders, doors, roof and ducktail spoiler—which together save 143 pounds—are custom-made. Look closer and you’ll spot dynamic turn signals in the door mirrors and a jutting center-exit exhaust. Wait … what? The tailpipes are fake, of course, but a hidden speaker beneath the rear bumper does its best to mimic the crackles and pops from those of a traditional internal combustion engine (ICE). I soon switched that feature off.

Eight lithium-ion batteries are installed in the front trunk, plus 16 others where the engine would usually be.  Photo by Alexp.com, courtesy of Everrati Automotive Limited.

Inside, the front-and-center rev counter is swapped for a power dial, and the fuel gauge is exchanged for a battery-charge readout. The FM radio also makes way for Porsche’s DIN-sized Porsche Classic Communication Management (PCCM) system, which offers Bluetooth and Digital Audio Broadcasting (DAB), plus Apple CarPlay and Android Auto connectivity. Options include Tractive adaptive dampers (adjusted by a touchscreen on the center console), a reversing camera and Porsche’s RennSport Rennwagen (RSR) race pack with a rear roll cage. The changes are transformative, yet subtle enough that it looks, at a glance, just like a classic 964.

The interior touchscreen that adjusts the car’s Tractive adaptive dampers.  Photo by Charlie B Photography, courtesy of Everrati Automotive Limited.

Mike Kerr’s résumé includes stints at Cosworth Racing, McLaren and Lotus (his final project before joining Everrati was the 2,000 hp Lotus Evija), so one of his key goals was saving weight. Impressively, the electrified 911 example tips the scales at 3,085 pounds—only around 100 pounds more than the ICE version—and its 40/60 weight distribution between the front and rear, respectively, is almost identical to the original. On the road, that translates into alert steering, athletic balance and a wonderfully analog and authentic 964 feel. Unlike with the tech-fest Taycan, you adjust your driving to suit the car, not vice versa.

Inside, the front-and-center rev counter is swapped for a power dial.  Photo by Charlie B Photography, courtesy of Everrati Automotive Limited.

The instant torque is addictive, the linear whoosh of acceleration like a jump to warp speed. But despite the lack of lag, and a Quaife rear differential, the Everrati still demands your attention—and your respect. On narrow lanes that wriggle through the English countryside, I used the regenerative brakes to scrub off speed and maintain a smooth “one-pedal” flow. It was an oddly calming, yet totally immersive experience. Not better than a gasoline-fueled 911, just different.

Fake tailpipes are just for show, while a speaker beneath the rear bumper projects artificial crackles and pops to mimic those from an internal combustion engine.  Photo by Alexp.com, courtesy of Everrati Automotive Limited.

Perhaps that’s the point. Those who buy an Everrati may already have a 911 restomod from Singer or Theon Design in their collection. Probably a stock 964, too. This is a future-proofed classic with a twist; refined and comfortable enough for commuting, rewarding on the right road and an endless talking-point at the local Cars and Coffee. It also proves that electric vehicles can be genuinely fun to drive. And for that, we should all breathe a sigh of relief.