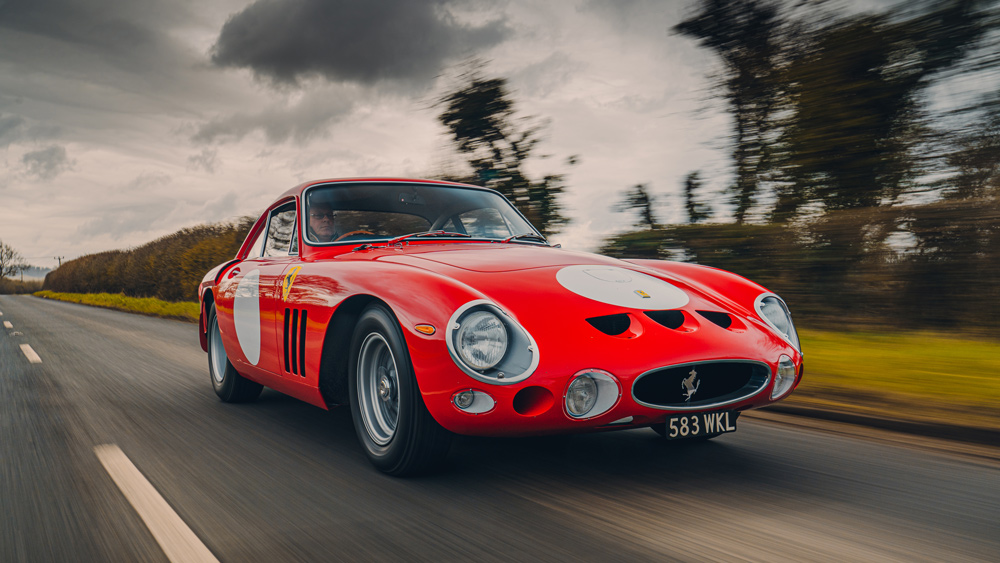 We crest the hill then plunge into a broad valley, its patchwork fields dotted with wildflowers and dappled with sunshine. As the road uncoils, I slot the ball-topped lever into third and bury the throttle. The classic Ferrari lunges at the horizon, the hedgerows becoming a blur as we’re wrapped in a blanket of glorious V-12 noise. After 15 years as an auto journalist, my career may just have peaked.

For me, life-affirming, tell-your-grandkids moments like these are why old cars matter. They should be driven, not buffed to perfection on a concours lawn. Yet many Ferraris have become so valuable that owners, perhaps understandably, won’t risk using them. That’s where a recreation like this 330 LMB comes in. It looks, sounds and even smells like the real thing, but you can enjoy it without fear of desecrating an old master.

The original Ferrari 330 LMB (Le Mans Berlinetta) was an evolution of the legendary 250 GTO. However, while the GTO was a formidable sports-car racer, the LMB’s best result was fifth at Le Mans in 1963, driven by Mike Salmon and Jack Sears. Its chassis was based on the 250 GT Lusso, while its V-12 engine was enlarged to 3,967 cc (242 ci) for 390 hp and 300 ft lbs of torque. Just four examples were made, and all have survived. What is the genuine article worth? Well into eight figures, certainly.

The story of this particular Ferrari recreation starts with English farmer Ed Carter. He initially planned to create a 250 GTO or SWB replica, before a friend remarked that “everyone has one of those.” Carter then bought a Ferrari 330 GT donor car and flew to New York to examine one of the existing 330 LMBs, taking measurements and creating cardboard templates of every body panel. Sadly, he was killed soon afterwards while driving a vintage Bentley, and never completed the project.

Here’s where restoration house Bell Sport & Classic picked up the baton. The UK specialist saw the unfinished Ferrari as a chance to demonstrate its refurbishing skills—particularly those of Elliot East, who spent 4,500 hours realizing Carter’s vision. “It’s an authentic job using period Ferrari parts,” East explains. “If components weren’t available, we usually made them in-house. We spent a year searching for window catches before deciding to sand-cast our own. There are some concessions to usability, but this definitely isn’t a restomod.”

A starter motor churns and six custom-made Weber 42 carburetors clear their throats. The 330 LMB replica emerges from the workshop—dressed in classic Rosso Corsa—with racing roundels on its doors and hand-painted Scuderia shields. It isn’t as iconic as a GTO, nor as beautiful as a Lusso, but it looks fabulously functional. The distinctive raised panels on the rear fenders, for example, were a quick racing workaround to increase tire clearance. I open the lightweight door (“Getting them aligned perfectly took eight months,” I’m told) and carefully fold myself inside.

The simple bucket seat is trimmed in corduroy and bolted to the floor. That makes the pedals quite a stretch for my 5-foot 8-inch frame, and I have to slump, adopting the “long arms, short legs” driving position of Italian car cliché. The skinny wooden wheel feels wonderfully tactile, and the machined aluminum gear-lever turret looks superb. Bell Sport & Classic has also retrimmed the interior in “Competition Lusso” style, with deep carpets and wall-to-wall quilted leather. A GPS-based digital speedometer is another addition—Salmon and Sears only needed a rev counter.

There’s something slightly terrifying about driving a unique car alongside the man who has dedicated three-and-a-half years to building it. Thankfully, East seems relaxed as I guide the Ferrari’s GTO-esque nose along narrow lanes that weave between picturesque English villages. The worm-and-roller steering is low-geared but full of feedback, while the long-throw shift—five speeds with synchro, not the original’s four-speed dog ’box—is hefty and mechanical. The all-round disc brakes are far better than most cars of this era, too.

With a leaf-sprung rear axle and modest Michelin XWX tires, the 330 LMB will never match the grip of modern sports cars—nor would you want it to. It turns in accurately and feels confidence-inspiring mid-corner, with none of the bump-steer that can afflict classic Ferraris. It also rides impressively well for a pseudo racer; only abrupt potholes interrupt the sense of flow.

Even so, everything is overwhelmed by that engine. The naturally aspirated Colombo V-12 is one of the greats: docile and tractable, with a hunger for revs. Its redline has been set at 6,000 rpm for today, but East says it will easily stretch to 7,500 rpm and beyond. The LMB’s jutting exhausts have been fashioned from mild steel, rather than stainless, for a fuller, more decadent snarl. And it’s all overlaid by intakes gasping, carbs gurgling, cogs meshing and whining, and the clunk-clunk of the manual gearbox.

As a rolling advertisement for Bell Sport and Classic, this 330 LMB does its job. It’s flawlessly finished and a real talking-point. As a classic Ferrari, it feels authentic without being too priceless to use. And as an experience, it’s unforgettable. Perhaps a combination of the UK’s lockdown ending and a warm spring afternoon swayed my judgement a little—but classic cars are all about those moments, right?