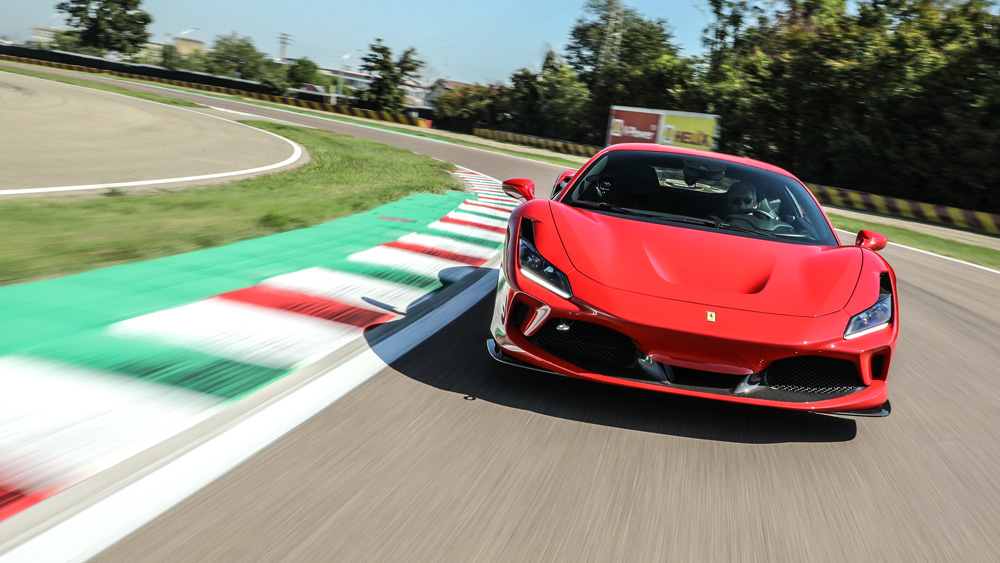 The old man driving the smoking diesel station wagon just will not pull over, so I’m left to dawdle behind him as we putter through yet another picturesque hill town high above Ferrari’s fabled hometown of Maranello.

Suddenly, a local yells out indignantly, “Superalo!”—meaning “Pass him!” Armed with that OK, I mash the throttle on my F8 Tributo and, instantly, the diesel wagon is a blur as the F8 rockets forward with a thrust comparable only to when I once was launched off the U.S.S. Eisenhower aircraft carrier in a jet. Yes, that absurd.

As I roar across the town’s main piazza, a dozen old timers look up from their card game. Some of them stand and applaud. It’s in that moment you’re reminded that, in Italy, Ferrari is less car company and more national religion, its Prancing Horse logo a symbol of the country’s triumphs, tragedies and endless potential. The new 2020 F8 Tributo is more than worthy of such reverence, as Robb Report found out on a recent first-drive that included a brief but revelatory session at Fiorano, Ferrari’s vaunted private test track.

The F8 Tributo at Ferrari’s private track in Fiorano.  Photo: Courtesy of Ferrari.

Introduced in March at the Geneva Motor Show, the F8 Tributo is the successor to the 488 GTB, a rakish machine whose V-8 power plant—a four-time Engine of the Year winner—represents the apex of nearly a half-century of eight-cylinder development. The engineering brief for the F8 was direct: combine the power and precision of the track-oriented 488 Pista with the manners and comfort of the 488 GTB.

A day spent behind the F8’s smaller, switch-filled steering wheel reveals that this mission was accomplished. The $270,530 (starting price) sports car artfully offers both a brutal performance envelope that will test the skills of even the most experienced driver, as well as a docile drivability that encourages you to amble on down to your local supermarket. For a grocery run, that twin-turbo V-8 will simply rumble seductively. At fever pitch, however, the 720 hp beast will spook the daylights out of you. That much was clear during the Fiorano track laps, which unfolded under impossibly blue skies that days earlier had been dark with rain clouds.

The power and precision of the track-focused 488 Pista with the manners and comfort of the 488 GTB.  Photo: Courtesy of Ferrari.

I was allowed four laps on this haloed circuit, where the likes of Michael Schumacher had fine-tuned many an F1 machine, and where Enzo Ferrari himself had scrutinized drivers for decades until his death in 1988. The track offers silent tribute to both the late founder and recovering ace in the form of Enzo’s old farmhouse and a nearby sign naming the square out front Piazza Michael Schumacher, in deference to the German’s five consecutive championships with Ferrari from 2000 through 2004.

Though four laps are barely enough to learn the nuances of Fiorano’s eight turns, which include two hairpins and a near-jump on a tunnel overpass, they were sufficient to get a sense of how Ferrari engineers have kept the best of the 488 Pista’s road-gripping prowess while affording amateurs the reassuring comfort of a few critical electronic minders. Those include Dynamic Enhancer Plus, which leverages brake vectoring to increasing cornering ability, and the latest version of Slip Angle Control, which provides controlled oversteer and makes you an instant drift king. This machine is a far cry from the early versions of Ferrari’s V-8 offerings (Magnum, P.I. anyone?), which were long on looks but skimpy on performance. For the past 15 years, these mid-engine missiles have been built as de-tuned track demons that are always ready for battle in the Ferrari Challenge race series.

Just how capable the F8 Tributo is was brought home by a couple of laps riding shotgun with Ferrari test driver Fabrizio Toschi, who threw the F8 Tributo into hairpin Turn 6 so as to guarantee a 360-degree spin, or so I thought. Instead, the car just hung its rear end out until a steering wheel flick sent its nose roaring straight toward Turn 7. As the F8 danced in Toschi’s able hands, I thought back to the long list of performance enhancements laid out by a parade of Ferrari engineers the night before, all of which seemed to come together in this masterful Fiorano performance. These include a 10 percent increase in downforce (thanks to refined aerodynamic properties) and a nearly a 90-pound reduction in weight (courtesy of more carbon fiber, titanium connecting rods, and 488 Challenge-derived parts such as exhaust manifolds, crankshaft and flywheel).

Enzo Ferrari famously said that “the best Ferrari is the next Ferrari.” The array of improvements in the F8 Tributo certainly will cause some 488 GTB owners to think they might own yesterday’s news. But there’s another reason to feel like this car is truly special, and it’s in the name. In many ways, the Tributo is a salute to numerous predecessors, from the 1975 GTB (cue the F8’s four round tail lights) to the late-‘80s F40 supercar (note the F8’s similar Lexan engine cover). But there has been talk that this car could well be a final salute to the V-8 line itself, as the company works on more economical and environmental engine configurations along with its forthcoming don’t-call-it-an-SUV, the Purosangue.

The F8 Tributo’s Lexan engine cover is reminiscent of that found on the Ferrari F40.  Photo: Courtesy of Ferrari.

Fair enough. And more reason to beg, borrow and steal your way onto a list for the F8 Tributo. Both the coupe and newly introduced F8 Spider are the best of Ferrari’s mid-engine V-8 lot—and yes, quite possibly the last.