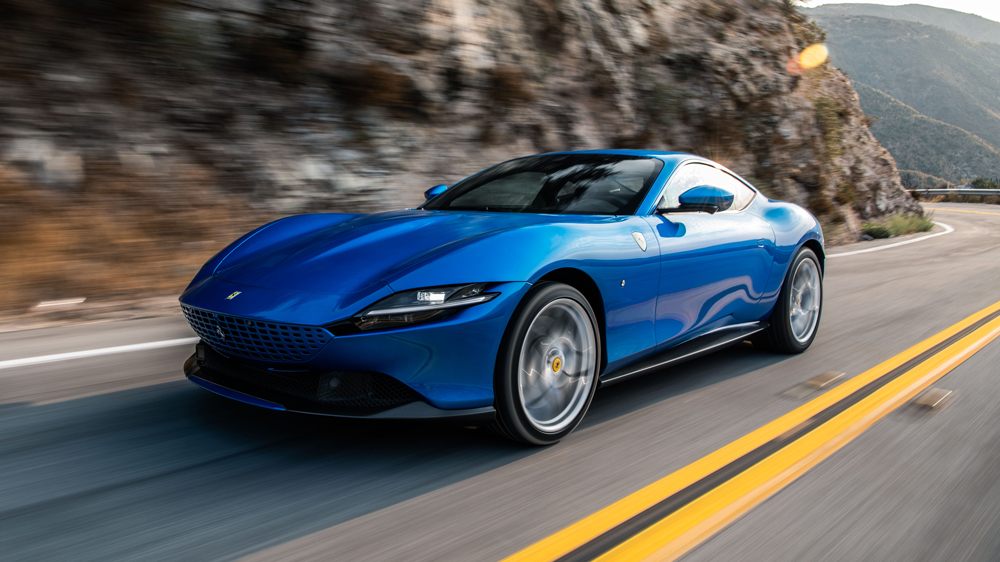 Fanfare accompanies the announcement of any new Ferrari, and within the past year, Italy’s famous automaker has been announcing plenty. Each fills a niche, forges new paths (in the case of the SF90), or expands on the capabilities of its predecessor. But the just-released Roma, coming to the US before the end of 2020, may be the most exciting of them all, because it establishes an entirely new bloodline within the Ferrari family.

Ferrari calls the Roma a 2+ coupé, and it assumes the role of a luxury GT in the classic Ferrari tradition. The name tells a story its makers describe as la nuova dolce vita (“the new sweet life”). The stylish two-door gives a nod to the fertile artistic period of the 1950s and 1960s, when Rome expressed unmatched creative vitality, exercising a global influence on art, music, fashion and film—all with unmatched Italian flair. It was a time when no car in the world was as beautiful and desirable as a Ferrari, whose varied 250-series GT cars from the era—notably the 250 GT Lusso—remain among the most gorgeous and perfect things on wheels.

Ferrari’s chief design officer Flavio Manzoni describes the Roma as “Formula 1 in an evening dress.” Developed within the Ferrari Styling Centre, its harmonious proportions and elegant lines describe a shape that eschews extraneous adornment; even window trim above the side and quarter windows is in body color. Especially interesting is the shark-nosed front end, featuring a unique perforated grille—also in body color—that enhances the holistic shape. In an era where most marques are desperately seeking to establish identity with more and more outrageous and undignified grilles, the Roma shows how good design can be accomplished.

The surface of the hood is undisturbed by vents, and the body is absent flaps or fins. Narrow LED headlights, complemented by a quartet of thin taillamps at the rear, provide illumination without distracting from the whole. Beyond the base of the backlight, a deployable two-position aero device (we used to call them spoilers) pops up on an as-needed basis. Below the deep trunk lid is a prominent rear diffusor, which on our Blu Corsa car—as brilliant as a morpho butterfly—was in carbon fiber, an $11,812 option, one of many nice-to-haves that added a substantial $109,581 in options to the Roma’s $218,670 base price. With destination charges, and before sales tax, the Roma offers a $332,001 taste of “the new sweet life.”

The heart and soul of that life is the Roma’s engine, a twin-turbo, 90-degree V-8 displacing 3,855 cc. Its pistons are spun by a flat-plane crank and the engine delivers 611 hp at 7,500 rpm and 561 ft lbs of torque from 3,000 to 5,750 rpm. Top speed is above 199 mph. Acceleration from zero to 62 mph flashes in 3.4 seconds, and it’s funny how that number seems almost mundane in our world of sub-3-second supercars. Trust me, the Roma is plenty quick. The engine, familiar to anyone who has driven a Ferrari V-8 of recent vintage, is a masterpiece.

Lifting the long hood, one notices that the engine is pushed far back in chassis for perfect 50:50 balance that one senses in the seat of one’s pants. That, combined with Roma’s 3,461-pound curb weight, thanks to 70 percent of the components being all new and designed with weight reduction as an overarching goal, ensures light and nimble handling. Carbon-ceramic brakes are standard, and a variety of 20-inch wheel designs are available, although the base silver-painted five-spoke rims look oh so right.

Equally as impressive as its V-8 engine is the Roma’s eight-speed dual-clutch gearbox. Derived from the unit used in the ferocious SF90 Stradale, it is the new transmission for Ferrari road cars going forward. The rear-mounted, F1-style transaxle is small, light and quick-shifting, and, in concert with the engine’s lack of turbo lag, upshifts so seamlessly that one wonders whether there is a gearbox at all. Of course, drivers can entertain themselves in Manual mode, where the generous-sized paddles offer tactile reassurance that one exercises at least partial control of one’s destiny.

Control, however, is often best left to the Roma, whose Side Slip Angle Control (SSC) and ancillary Electronic Stability Control (ESC) systems ensure that, however wild the driver, the car is looking out for everyone’s well-being. Ferrari’s famous Manattino, that little aluminum, red-anodized switch on the steering wheel, dials in various degrees of attitude, all monitored by systems far quicker and smarter than this driver. Choices are Wet, Comfort, Sport and—new to Ferrari GT cars—Race. The latter lets Roma flex its muscles in a track setting, should owners choose to take it there. On the road, the Race mode is essentially overkill, and the ESC Off setting is wisely avoided on public roads. Most enjoyable is the Sport setting, while Comfort is preferred for freeway and around-town driving.

Under the hood is Ferrari’s twin-turbo V-8 with 611 hp and 561 ft lbs of torque.  Photo by Robin Trajano, courtesy of Ferrari North America, Inc.

The Roma’s interior is a haven. Its designers call the layout “integrated architecture,” another way of saying it all flows together very nicely, creating the illusion of two cockpits—one for the driver and one for the passenger. The symmetrical layout engages the guest, unlike Ferrari sports cars such as the F8 Tributo that emphasize the driver position as the best seat in the house. A narrow center console swoops down from the dashboard and floats; topped by an elegant 8.4-inch HD central display—right-sized, and not the gigantic flat-screen presentations that dominate so many cabins designed to emulate a videogame console. Below that are situated three elegant toggles (Reverse, Automatic/Manual and Launch) in an arrangement recalling the signature aluminum shift gate back when Ferraris had a cue ball atop a metal stick. A single cupholder, large enough for a Venti but not—thankfully—for a Thirsty-Two Ouncer, occupies the flatland to the right of the driver.

Ferrari’s Side Slip Angle Control and ancillary ESC systems ensure that the Roma is looking out for everyone’s well-being.  Photo by Robin Trajano, courtesy of Ferrari North America, Inc.

Ferrari has always been on the forefront of cockpit ergonomics, largely due to steering-wheel design—incorporating lessons learned in F1 motorsport—that keep a driver’s eyes on the road, not roaming the dash. In the Roma, the comfortable wheel does it all, controlling everything from turn signals to displays. A thumb-operated haptic touchpad, smaller than a postage stamp on the right spoke, operates virtually every informational system. An optional HD touchscreen on the left side of the dash keeps passengers with control issues entertained and in charge of infotainment.

Visibility from behind the wheel is enhanced by the sense of space afforded by the roomy interior layout. The view out and over the wide hood is excellent, though unlike in a Porsche 911, one never really knows where the corners are. Front seats are superb, and one of the few “essential” options is Daytona upholstery—a Ferrari signature as distinguished as John Hancock’s. Materials are leather and fine Alcantara, with select accents of chrome as elegant as one might see on a fine Italian handbag.

Curiosity had me wondering if an adult human could possibly fit in one of the rear seats, so I attempted ingress. I slid the front passenger seat forward and, like a cat trying to put its head in a Dixie cup, oragamied myself into the back. Head in lap, knees in face, the posture was—to quote Philip Dormer Stanhope, the 4th Earl of Chesterfield in describing a more popular human endeavor—“ridiculous.” Although, for the record, it can be done. The trunk, which opens generously from the very base of the bumper, is sufficiently capacious for weekend luggage, however, large hat boxes—de rigueur during the 1960s—are best left at home.

The interior creates the illusion of two cockpits—one for the driver and one for the passenger.  Photo by Robin Trajano, courtesy of Ferrari North America, Inc.

The Ferrari Roma got me thinking about the role of fantastic cars in the context of real-world driving. Few stretches of pavement are as inviting as the roads that hug the California coastline, and the canyons that snake from its beachfront to the inland offer some of the best curves on the planet. But stuck behind a pickup truck towing a horse trailer at 25 mph, the irony was not lost that even this Prancing Horses is only as quick and spirited as the doddering nag in front of it. Thankfully, unlike some thoroughbreds, the Roma is, decidedly, not high strung. Without complaint, it suffered the indignity of clip-clopping at a Clydesdale’s pace until a quick downshift and a passing lane afforded an opportunity to rocket past.

Once unfettered, the car is an elegant four-wheeled accomplice, one that throws down the gauntlet to any automaker imagining they can make a better GT. Marques from Supercar Valley, southern Germany and the UK are always jockeying for position as purveyors of the latest and the greatest but, for now, it’s this driver’s opinion that the new Ferrari Roma is the best V-8-powered GT car on the road, anywhere. It delivers a high-performance driving experience that always entertains without becoming tiresome, and the unadorned design ensures that its classic aesthetic will endure the test of time. Others may have more audacious shapes, greater power or more opulent interiors, but as a complete package, the Roma offers a glimpse of the sweetest life, indeed.