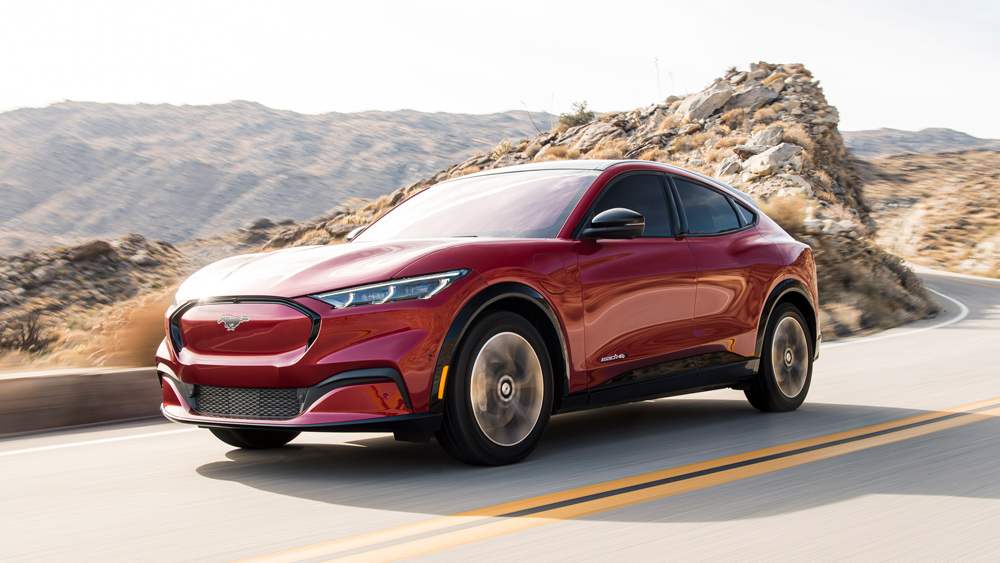 Iconic nameplates are back. There’s the new Hummer—reborn in electric truck form—the Land Rover Defender and the Ford Bronco. Now Ford hopes to tug at the heartstrings of muscle-car lovers looking to go green with the 2021 Ford Mustang Mach-E, an electric crossover that kicks back against the gas-burning, preeminent pony car’s reputation.

Those performance specs fall short compared to luxury electric SUVs such as the Audi E-Tron, Jaguar I-Pace and forthcoming Volvo XC40 Recharge, but the Mach-E’s advantage—like its coupe and convertible counterparts—is its bang for the buck. Starting at just $42,895, the Mach-E undercuts the high-end competitors and offers more allure than what you’d find from other mass-volume brands.

That allure, however, wasn’t always part of the plan. As we first mentioned when the vehicle was unveiled in late 2019, what would become the Mustang Mach-E was almost an unremarkable compliance car, built on a Ford Focus EV platform that promised to be as exciting as a rolling toaster. But with some executive foresight and good marketing, a new kind of Mustang was born.

To make Ford’s EV look like a Mustang, designers scrapped the old plans and gave the vehicle a shark-nose hood which sits much higher than on the original design, tri-bar lighting graphics in the front and rear, a muscular rear haunch and a fastback cantrail. The RWD platform, with the battery pack positioned in the floor, allows for a longer wheelbase, bigger wheels and a longer dash-to-axle, giving the Mach-E more classic, sports-car-like proportions. The front grille, which isn’t technically necessary in an electric vehicle, keeps the same shape as the Mustang coupe but gets a new transparent, three-dimensional treatment.

The Mach-E is also a showcase of Ford’s latest technology. Through the mobile app, owners can set up and start the car remotely, use a phone as a key and find available charging stations. Dominating the interior is a large, upright central tablet (and perhaps the world’s biggest volume knob) that runs the latest edition of Ford’s SYNC interface. The small cluster screen in front of the driver offers several configurations and, incidentally, mimics the winged theme of the instrument panel found in the Mustang coupe. The car also comes with a suite of driver assists that include adaptive cruise control, cross-traffic assist, lane keeping assist and a reverse sensing system. And cameras behind the steering wheel watch eye movement to make sure the driver is paying attention to the road.

The front grille, although not needed in an electric vehicle, keeps the same shape as the Mustang coupe but with a new transparent, three-dimensional treatment.  Photo by James Lipman/jameslipman.com, courtesy of Ford Motor Company.

On a test drive in Los Angeles, we sat in the AWD Mach-E through stop-and-go traffic up to Pacific Coast Highway, where we gave it a quick workout through the twists and turns in the canyons above Malibu. Despite its weight, the car was stable and fun. As some hardcore enthusiasts have already noted, it’s not really a Mustang, but for the most part, any absence of muscle-car behavior can be chalked up to sheer physics. Considering its size and electric platform, Ford engineers did a remarkable job making it come close.

Back in the giant, socially distanced parking lot where we collected our test cars, we took the RWD version for a spin around an autocross course and found the ride and handling to be consistently responsive. Again, the vehicle’s weight didn’t do it any favors, but smooth inputs and late turn-ins kept us from taking out any cones. What’s more, the RWD setup let us kick the end out a bit and make some tires squeal. The Mach-E offers different drive modes that adjust pedal mapping, regenerative braking and steering assist, but the fully mechanical suspension is fixed.

Cameras behind the steering wheel watch eye movement to make sure the driver is paying attention to the road.  Photo by James Lipman/jameslipman.com, courtesy of Ford Motor Company.

For those who care primarily about range and convenience, the Ford Mustang Mach-E with the extended-range battery is a solid performer and outshines other electric vehicles in its price range. For a more Mustang-like experience, we’d wait for the Mach-E GT Performance Edition due late this summer. That variant boasts 480 hp and 634 ft lbs of torque, a lower ride height, sport-tuned suspension and a projected zero-to-60 mph time of 3.5 seconds. Now that’s more Mustang.