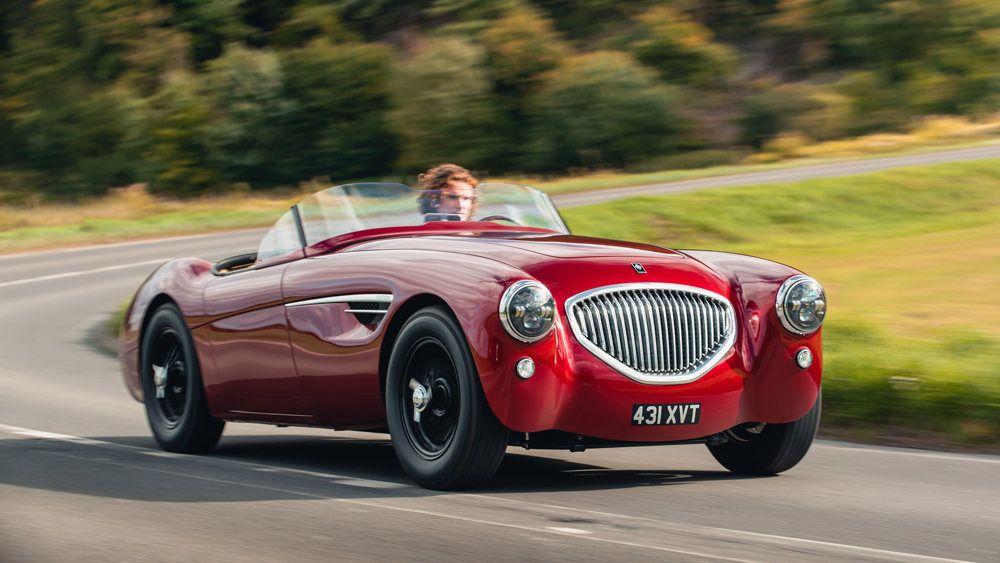 Launched in 1952, the Austin-Healey 100 heralded a golden age for British sports cars. While America gorged on chrome and tail fins, Brits got their kicks in affordable roadsters such as the Healey, MGA, Triumph TR2 and Lotus 7. These traditional cars distilled driving to the basics, with a stick shift, rear-wheel drive and just enough power to have fun.

A modern take on the “Healey Hundred”—named after its ability to reach 100 mph—needs to strike a delicate balance, then. Shoehorning in a V-8, widening the track or fitting rubber-band tires would miss the point. Perhaps that’s why aspiring luxury brand Caton describes this car as a “reincarnation” instead of a restomod. Its aim is to enhance the simple charms of the original Austin-Healey, rather than drag it abruptly into the 21st century.

The Healey by Caton, to use its official title, is the first car from the nascent automaker. However, Caton’s parent company, Envisage Group, has more than a decade of experience in building concept and low-volume vehicles, including the continuation Jaguar C-Type, D-Type and XKSS. Only 25 examples of the re-envisioned Healey will be made and I’ve arrived at a quiet country pub, close to the historic Goodwood Motor Circuit, to drive the first completed car. Thankfully, given the car has no roof (only a tonneau cover), I’m grateful that the traditional British weather has taken a day off.

Basking in the afternoon sunshine, cherry-red metallic paint glinting off its fulsome curves, the Caton exudes a raffish retro glamor. This 100/4 BN1 model isn’t as square-jawed and muscular as later “Big Healeys” of the era, but its long hood, kicked-up rear fenders and tapering tail squeeze plenty of drama into a small silhouette. Only when a modern SUV parks alongside do I realize just how tiny this car is; the contrast is almost comical.

The “less is more” ethos also informs Caton’s changes to the bodywork. Using 3-D scans of an original Austin-Healey 100, the company removes the body seams and boot handle, swaps external hinges for internal items and tightens up the panel gaps to modern tolerances. The grille is also redesigned to give it more depth, and the windshield is swapped for a speedster-style screen while the old halogen headlights become super-bright LEDs. The wheels, however, are still old-school Borrani wires wrapped in Avon rubber with a period-correct tread pattern.

Caton enlists renowned UK specialist JME Healeys to rebuild the four-cylinder engine, which is bored out from 2.7 liters to 3.0 liters, then fitted with larger twin H6 carburetors, a gas-flowed head, high-compression pistons, upgraded bearings and a racier camshaft. The result is a zesty 180 hp—twice the output that the 100/4 left Austin’s Longbridge factory with nearly 70 years ago. Caton doesn’t publish performance figures, but with a curb weight of just 2,028 pounds, this car promises to be fast, even by today’s standards.

I reach inside to unlatch the delicate door handle, then settle into a supple bucket seat. The big wood-rimmed steering wheel is close to my chest, the Caton-branded dials are models of analogue clarity and the wraparound windshield offers a panoramic view ahead. Binning the 100’s fabric roof has also liberated extra cabin space, meaning drivers of “modern” proportions may now get comfortable. Just don’t expect any infotainment, or heating. This is back-to-basics driving, remember?

Pull out the choke, prime the fuel pump and the big-chested four-cylinder coughs gruffly to life. The tailpipe exits just below your left ear, its busy bluster impatiently demanding your attention. Rev it at a standstill and the Healey rocks from side-to-side on its suspension like a muscle car, which excites me more than it probably should. I slot first gear, release the fly-off handbrake and, with a vigorous roar, leave the locals to their post-lunch pints.

The Caton’s gear lever is a stubby shaft protruding from the center console, rather than the spindly wand of an original Healey, and it now has five ratios instead of the three-plus-overdrive of the 100/4. The pedals are offset and tightly packed in the footwell, but the Tremec gearbox shifts smoothly, even when the oil is cold. The uprated brakes feel reassuringly user-friendly, too. Pottering around, riding the engine’s swell of mid-range torque, is really quite relaxing.

Up your pace and the Caton starts to feel more old-fashioned—although not in a bad way. The unassisted worm-and-peg steering is markedly vague around the straight-ahead, while the leaf-sprung rear suspension bounces impishly over bumps, meaning I constantly have to correct my course. Drive through that initial slack and softness, though, working at the wheel and leaning on the tall tires, and the Caton settles into a joyous, mesmerizing flow.

Indeed, its compact dimensions and gutsy demeanor feel tailor-made for leafy English lanes. With my elbows out wide, right foot blipping each downshift and the breeze skimming my forehead, those concepts that seem to shape and define modern sports cars—aerodynamics, downforce, lap times and the like—seem all but irrelevant.

The Healey by Caton is a wonderfully evocative and beautifully built “reincarnation”. As per the brief, it builds on the strengths of the original without diluting its classic character. Unlike the original, however, Caton’s version starts at $421,000, plus taxes and the cost of a donor car. For that kind of outlay, you could buy a fully restored 100/4 BN1 and a brand-new supercar on the side. Nonetheless, if you want something bespoke, the great British sports car elevated to an objet d’art, there is nothing quite like the Healey by Caton.

Click here for more photos of the Healey by Caton.