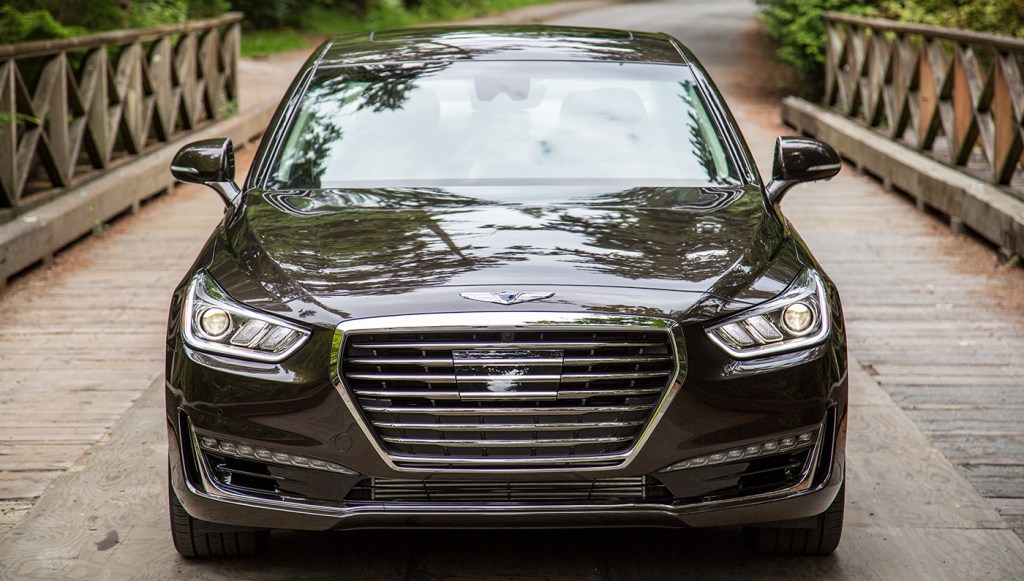 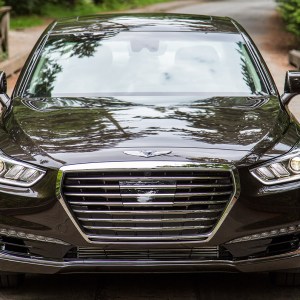 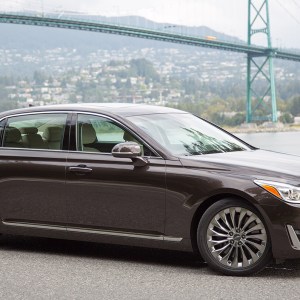 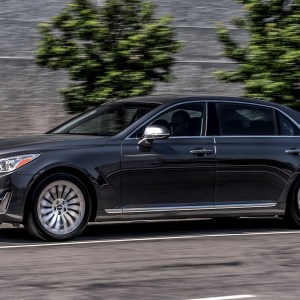 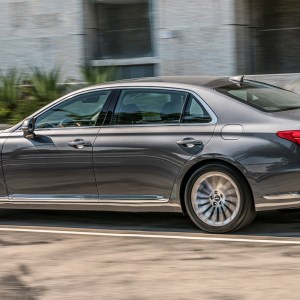 Genesis is the all-new luxury brand aimed at taking on the likes of Lexus, Infiniti, and established European rivals. Spun off by Hyundai, Genesis is the result of nearly a decade of deliberation within the Korean parent company, whose dedication has catapulted it from back-marker to industry leader, collecting accolades along the way for design, value, and safety.

The G90 is Genesis’s full-size flagship, but unlike some luxury cars based on non-luxury counterparts, the G90 isn’t a Hyundai with a fancy badge slapped on. It uses its own dedicated platform and is powered by one of two exclusive engines: either a 3.3-liter twin-turbo V-6 or a 5.0-liter V-8, both available with rear-wheel or all-wheel drive.

We drove the V-6-powered G90 on a day-long road trip from Vancouver to Vernon, British Columbia, and found the 365 hp engine hearty and smooth. A superb power band offers plenty of power at every speed, with peak torque of 376 ft lbs coming in as early as 1,300 rpm, aided by an eight-speed automatic transmission developed from the one found on the now-defunct Eqqus, Hyundai’s previous attempt at a high-end sedan.

Adjustable driving modes for the G90 include Adaptive, which can learn driving behavior and adjusts throttle response, shift points, and suspension accordingly. On long straight stretches of highway, we kept it in Adaptive mode and enjoyed a smooth quiet ride, aided in part by acoustic glass and a plethora of sound-dampening technology. Off the highway and up into the hills, we switched into Sport mode, which tightens up the steering and suspension, shifting at higher revs to maximize performance. The G90 is also equipped with an Eco mode for better fuel economy.

Genesis shines when it comes to design. Just as Hyundai (and sister company Kia) lured away former Audi designer Peter Schreyer to oversee the design direction of all of its brands, Genesis also poached former Bentley designers Luc Donckerwolke and Sang Yup Lee to work on future Genesis models.

“We made the decision on day one that design is what we are after,” says Erwin Raphael, general manager of Genesis and former head of the Western Region for Hyundai. The G90’s front grille is wide yet tasteful, with the Genesis winged emblem sitting atop. Stretched-back headlamps are accented with LED running lights in the air intakes below. A long hood and short overhangs hint at the car’s rear-wheel drive platform, while a distinct character line runs the length of the car into the wraparound taillights. The view from behind is just as elegant, with integrated dual exhaust pipes and an oh-so-subtle lip on the decklid.

The interior layout is as good as any in the luxury space, with an arrangement of knobs and hard buttons that look orderly, not overwhelming. A 12.3-inch high-definition widescreen display sits atop an analog clock and is flanked by handsome wood trim. A 17-speaker premium Lexicon sound system with 10-inch subwoofer comes standard, as do heated and ventilated leather seats with a wide range of adjustability. Even the front headrests can move back far enough to accommodate ponytails or man-buns, a trick we discovered with the help of one of the Genesis engineers. Other standard features include semi-autonomous functions such as adaptive cruise control, lane keep assist, and automatic braking with pedestrian detection.

Pricing details are expected to emerge in September, but Genesis executives say the Genesis G90 will cost more than the current Hyundai Genesis sedan, but less than any similarly equipped competitors, with deliveries slated to begin in September. Genesis covers maintenance for the first three years and offers a 10-year/100,000-mile powertrain warranty. (genesismotorsusa.com)