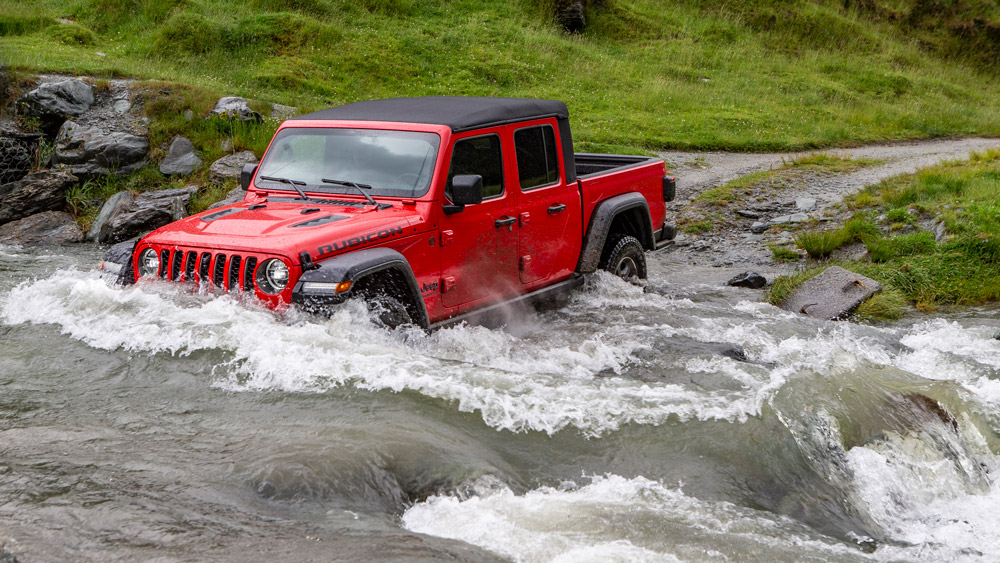 New Zealand’s southern island is experiencing historic floods, the likes of which haven’t been seen here since the 20th century. We’re working our way north from Queenstown, which just lost its entire access to the internet, and its normally tranquil lake overflowed so high that the lapping tides submerged trees. When we left for our drive that morning, it was clear that things could get hairy, quick.

A couple of hours later, at remote Wanaka Lake, we find that the entire road is under three feet of water, the flooding looks straight-up Biblical. If we were on an Aston Martin or McLaren drive, we would’ve been done; an opulent flagship sedan or high-performance coupé would be rendered utterly useless. Lucky for us, we are testing a Jeep—specifically, the celebrated marque’s first truck in almost three decades: the all new Gladiator. And even more specifically, in flagship Rubicon trim.

Knowing it’s a Jeep, we have a prayer, so our entire caravan clicks into Off-Road High and nose our Gladiators’ signature seven-slot grilles into the cool, clear lake one-by-one. Although crossings this deep always goose anxiety levels, the fact the Gladiator can ford up to 30 inches of water bolsters us with shaky confidence as we work our way across the skinny dip. We were told that Jeep “trail rates” the Gladiator in traction, articulation, maneuverability, ground clearance and water fording, installing all its fully insulated electronic modules above the fording line. I silently hope this will keep our caravan moving forward.

But that’s when I see something moving rather quickly across the water—an aluminum boat on the lake to our left. Suddenly it turns and heads straight toward us, its pilot staring at us as quizzically as we gaze back—twin ships passing in the cold drizzle. When he zips by, less than 10 feet from us, the wake splashes our windshield and I can only shake my head in disbelief.

“We’re going to make 4×4 cool again,” declared Christian Meunier, Jeep’s global president, that morning over coffee. I laughed it off at the time, wondering if he was really unaware that it’s never been uncool. But now, passing so close to a skiff in his new off-road vehicle—literally sharing terrain with a fishing boat—I realized to what level he was referring.

The vehicle can ford up to 30 inches of water.  Photo: Courtesy of Jeep.

From the 1947 Willy’s Overland until 1992, Jeep always had a pickup in its lineup. Then, for almost 30 years, nothing. But given the public’s voracious appetite for all things Jeep, the return of a truck seemed almost inevitable. Note that in 2009, Jeep sold about 300,000 vehicles; just last year, exactly a decade later, they sold more than five times that number. And they’re not slowing down anytime soon. Just this past weekend the Gladiator—and actor Bill Murray—starred in a virally shared Super Bowl commercial reviving his jaded Groundhog Day reporter Phil Connors. Murray kidnaps the titular rodent in a pumpkin-orange Gladiator Rubicon in what became the most popular, highest-reviewed commercial for the year’s biggest ad fest. Is this popularity due to Punxsutawney Phil, Jeep’s new pickup or Murray?

We may never know, but about an hour after crossing Lake Wanaka, we’re driving deep into a sheep-pocked valley, rock-crawling slowly over treacherous terrain. Serious stuff: jagged stones and exposed boulders, all on stock tires nonetheless. This is when we start playing with advanced terrain features on the Gladiator, such as its Off-Road Plus button, which works differently whether you’re in High or Low four-wheel-drive mode.

When driving in High four-wheel-drive, engaging Off-Road Plus increases the throttle response—you can feel the sharper input with the tap of your toe (thanks largely to the 285 hp and 260 ft lbs of torque from the Pentastar 3.6-liter V-6). But when you hit the really rough stuff and it’s time to slip into Low, the torque response is actually softened. You obviously have a lot more torque gearing-wise in Low, so a softer pedal allows you to more carefully feather the throttle without the Gladiator lurching uncontrollably.

Time to engage the Off-Road Plus button in Low four-wheel-drive mode.  Photo: Courtesy of Jeep.

This really makes crawling over the spilled Lego box of rocks and boulders a much easier endeavor, ever-so-slowly inching our way across the jagged New Zealand canyons instead of jerking back and forth in violent spurts.

To be clear, all Gladiators (e.g. Sport, Sport S, Overland) come loaded with off-road chops (including protective steel skid plates, four-wheel drive, solid front and rear axles, etc.), but our Rubicon can do things no stock truck in the world can. The Rubicon comes loaded with front- and rear-axle electric lockers, an electronic disconnecting front sway-bar, a tow- and winch-ready steel front bumper, bigger and higher fenders (by 2 inches) to allow for bigger wheels, higher ground clearance (11.1 inches), more aggressive 33-inch-tall all-terrain tires, a superb 43.4-degree approach and adequate 26-degree departure angles, Fox shocks on all four corners and heavy-duty rock rails. There’s even a front camera system working in concert with the burly mechanics to make the Gladiator Rubicon an unparalleled off-road machine. No more making your buddy get out to plot the best course through that boulder pile—you’ll see everything in front of the wheels presented on the dashboard’s 8.4-inch touchscreen [a $1,595 option].

Built largely on the Wrangler’s “ladder frame” bones, the Gladiator chassis was reinforced and stretched by 26 inches. It shares a lot of Wrangler DNA, but they’re not twins—more like cousins. Both feature heavy-duty Dana 44 solid axles on both the front and rear, but Jeep invested extra on the Gladiator’s rear wheels. In fact, the development of the rear suspension was seen as so critical to the Gladiator—especially balancing on-road comfort without sacrificing off-road capability—that Fiat Chrysler Automobiles moved the engineer of the successful Ram 1500 program over to shepherd the Gladiator.

And this is where things get a little tricky for Jeep. A solid front axle is obviously much more robust, superior for off-road duty; its simpler mechanism also makes it easier to lift and customize. In fact, the Gladiator is the only non one-ton truck in America with a solid front axle. Its rugged capability is demonstrated in spades over the two days of driving across this Lord of the Rings landscape. But even the hyper-anticipated new Bronco will have independent front suspension (IFS). To some off-road enthusiasts, that’s a signal that Ford is not serious about making a true Wrangler competitor. But Ford probably elected for IFS because a solid front axle also has its negative consequences, such as a harsher rider and looser, less dialed-in steering response.

Grateful for the Fox shocks on all four corners and heavy-duty rock rails.  Photo: Courtesy of Jeep.

These on-road sacrifices are experienced during the longer street drives—especially on fast, paved roads. The on-center steering is a little dead; NVH (noise, vibration and harshness) is far superior to earlier Wranglers, but still much noisier than asphalt-biased SUVs (despite two overdrive gears for highway driving).

But most buyers considering a Gladiator won’t be turned off by those unpolished edges. After all, it’s the only convertible truck in the world, and easily the most capable all-terrain pickup. Of course, since it’s Jeep’s first truck in decades, you can still take off its roof and doors, and even fold down the windshield. It boasts a spacious back seat with plenty of legroom (three inches of the extended frame were spent on increased rear leg room over the Wrangler); its ergonomic cabin is both comfy and utilitarian with 120-volt outlets and USB ports. Benefitting from the current generation Wrangler’s quantum leaps in ride comfort and handling, it’s also got almost all of the latter’s off-road ability with the added utility of a 5-foot bed bolted behind the rear seat (with a convenient waterproof 400-watt outlet).

The Jeep Gladiator Rubicon, priced starting at $45,040, is unapologetically built for off-road antics, there’s no question. If you’re planning on spending most of your time on asphalt it might not be your best option—especially if you prioritize a smooth, crossover-like feel. But as we learned in New Zealand, it will take you places no other pickup can—even through Biblical storms.