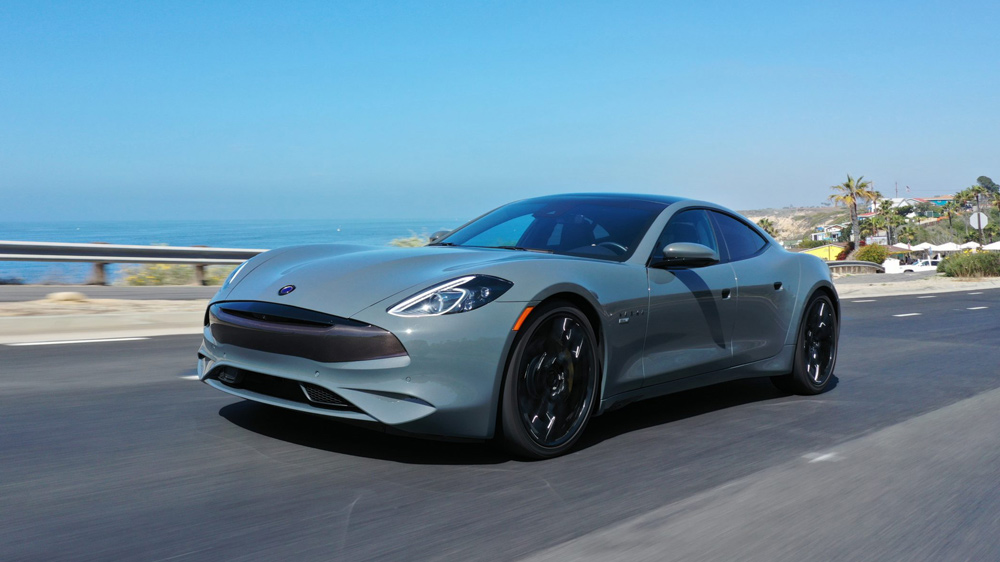 Now that dining out is back in full swing, I recently took pleasure in meeting some friends at a favorite Indian restaurant called Karma, which happens to be the name of the automaker whose car I parked in front of the establishment. That model, the Karma GS-6, has been an infrequent sight on roads until now, as production ramps up at the factory in Moreno Valley, Calif., and the full-fledged version of the plug-in/series hybrid becomes a more common encounter on the roads.

If the shape of the GS-6 seems vaguely familiar, it’s because automaker Karma, founded in 2014, has revised the already beautiful shape of the Fisker Karma, originally introduced by the marque whose enterprise—named after its designer and founder Henrik Fisker—was sold and relaunched as a new brand with new owners.

For would-be EV and plug-in hybrid owners unwilling to suffer the stifling plainness and ubiquity of a Tesla, there are few attractive alternatives, the kind of cars that make you turn around and stare at them when they’re parked and the driving is done. So, while there is nothing wrong with an automobile-as-appliance aesthetic—like a perfectly serviceable toaster or waffle iron—some drivers want to get excited about the way their car looks and makes them feel. And Karma’s GS-6 does just that.

Owners will buy the model for its looks, electric soul and the relative economy of an EV that also happens to come with a gas-powered engine. That engine, which provides no motive power per se, extends range by acting as an onboard generator to recharge the battery pack. Full charging, which requires 6.2 hours on Level 2, is accomplished more quickly on a Level 3 DC fast-charge, where batteries are topped to near-full capacity within 40 minutes. This makes the Karma a flexible vehicle to own, especially when short commutes constitute the majority of miles. Combined mileage is 26 mpg, with 70 MPGe of combined city and highway mileage.

The nuts and bolts—or batteries and wires—of the GS-6 are essentially as follows: A 28 kW lithium-ion battery pack provides juice to two motors, in conjunction with an internal combustion engine (ICE) that kicks in automatically to regenerate the batteries once they’ve run out their range, which in Stealth mode (battery only) is about 61 miles.

With the gasoline engine, total range is about 300 miles before it’s time to refuel. That ICE power plant is a UK-made, 1.5-liter three-cylinder DOHC turbocharged unit developed for the BMW i8 that independently adds torque to the total output in Sport mode. Combined power is 536 horses with a hefty 550 ft lbs of torque. The back wheels do the driving, with a motor at each rear corner that variously distributes torque via a single-speed transmission and a limited-slip differential. In Speed mode, the car achieves a zero-to-60 mph time of 4.5 seconds with an electronically limited top speed of 125 mph. With the optional GS-6S Performance Package, torque is upped to 650 ft lbs with electronic torque vectoring, and acceleration dips to 3.9 seconds while the limited top speed is bumped to 130 mph.

If plugged in to a Level 3 DC fast-charge system, batteries are topped to near-full capacity within 40 minutes.  Photo: Courtesy of Karma Automotive.

At only 52.4 inches in height, the Karma GS-6 is low. By contrast, our BMW M4CS parked next to it looked like an SUV. The low roofline is what contributes to its racy profile, but makes getting into—and out of—the rear seats an acrobatic feat for rickety old backs. Once seated, however, there is plenty of headroom and the two rear passengers will enjoy spacious accommodations.

Front passengers get all the usual amenities, with various driving and parking aids and cameras. The climate control provides frigid a/c, and the infotainment interface is sufficiently intuitive, with navigation operated via smartphone. What’s not as intuitive are the sideview mirrors, which have minds of their own and stare at the pavement when reversing. Within the interior, the fit and finish is good, but the ergonomics and comfort are great. And then there’s the combination of leather and a variety of trim options, which makes the cabin a very pleasant and, at times, eerily quiet place to be.

The low roofline is what contributes to the GS-6’s racy profile, but there is plenty of headroom in the spacious cabin.  Photo: Courtesy of Karma Automotive.

Drivers used to raucous rides with loud exhausts may be underwhelmed at first, but will soon acclimate to—and likely appreciate—the quiet when driving in Stealth mode, which puts the Karma under electric power only. Sustain and Sport settings, however, do pump some engine sounds into the cabin. The driving modes are selected with the steering wheel-mounted paddle on the left, with three levels of regenerative braking selected via the right paddle. Sustain mode is where most miles will likely accrue if one is driving further than the 61-mile Stealth range. Sport unleashes the big dogs, and it’s amazing what the added torque from the three-cylinder turbo adds to the experience—and the power—when the pedal goes to the floor.

Front passengers get all the usual amenities, and the infotainment interface is sufficiently intuitive, with navigation operated via smartphone.  Photo: Courtesy of Karma Automotive.

When given full throttle, the acceleration is imminently satisfying for any sane person, but drivers who enjoy having their stomachs churned by Tesla’s Ludicrous mode may be left wanting more. Owners who place a premium on handling will discover that the Karma isn’t a BMW M car. It weighs more than 5,000 pounds, so heavy steering is the order of the day, and no amount of “low-center-of-gravity” argument can mitigate the extra mass this sled is carrying. That doesn’t make it a bad vehicle at all, just not the four-door sports car that some other makes and models are designed to be. Grand touring in luxury is the Karma’s stock in trade, a job it performs exceedingly well.

In the all-electric Stealth mode, the GS-6 has a range of 61 miles.  Photo: Courtesy of Karma Automotive.

Brakes are big six-and four-piston Brembos in front and rear, respectively, and our Pacifico Grey car was shod with optional 22-inch HRE wheels, cross-drilled rotors and yellow calipers—a $12,300 package that gave the Karma plenty of extra attitude and plenty of added attention. With a starting price of $93,900, and $114,700 as our example was equipped, the Karma GS-6 is a viable contender in the luxury sedan segment, and as a plug-in/series hybrid, a rare bird that combines head-turning looks with a practical alternative to more traditional ICE-powered automobiles.