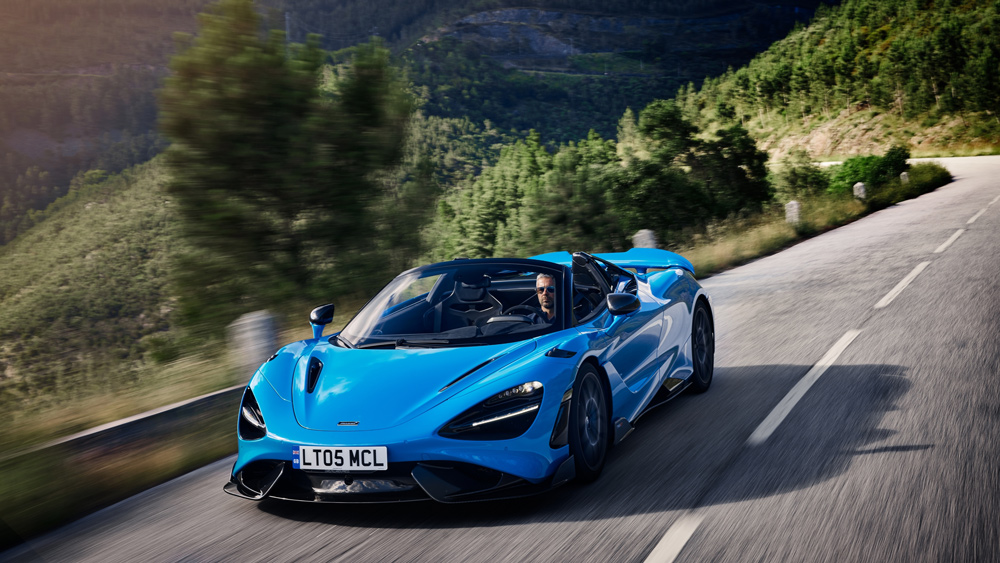 “Perhaps the LT [Longtail] brand is what I’m proudest of,” mentioned former McLaren CEO Mike Flewitt, who stepped down in October of last year. “The cars are daily usable and very exciting even at low speeds, yet they’re amazing on a track. They absolutely hit the spot for McLaren, and for me.”

Our conversation took place on a balmy late-summer day in 2020, looking across Silverstone’s pit lane. It was the launch of the 765LT, and Flewitt had just driven several flat-out laps in McLaren’s latest Longtail. Next it was my turn, and the now-sold-out supercar performed just as Flewitt promised.

The “Longtail” name has a lengthy backstory, starting with arguably one of the greatest supercars of all. For the 1997 season of GT competition, the McLaren F1 GTR gained extended rear bodywork, designed by Gordon Murray to boost downforce and increase stability at speed. Only 10 race cars were built, but their descriptive moniker—shortened to “LT”—became part of McLaren mythology.

Even so, the first LT road car didn’t arrive until 2015. The highly acclaimed 675LT was a longer, lighter version of the 650S, and nearly as quick around a track as McLaren’s P1 hypercar. Three years later came the 600LT, based on the 570S, as a rival for the Porsche 911 GT3 RS.

As the 765LT takes the 720S coupe as its starting point, the new 765LT Spider follows suite with the 720S convertible. The marque then applies the proven formula of more power, less weight and a (slightly) longer tail. The model variant’s 4.0-liter twin-turbo V-8, making 755 hp and 590 ft lbs of torque, breathes through four high-mounted titanium tailpipes. The power plant drives the rear wheels via a seven-speed twin-clutch gearbox. And while the 765LT Spider tips the scales at 3,060 pounds, some 108 pounds more than the coupe, it’s still 176 pounds lighter than a drop-top 720S.

My route this time consists of bumpy British back roads instead of a Grand Prix circuit, and I’ve traded September sunshine for bitter January cold. Not ideal for a top-optional supercar. At least McLaren has swapped the standard Pirelli Trofeo R track tires for less single-minded P Zeros.

The Spider also has other features that make it more road-friendly. Its steering is slower geared than the coupe, and damping is a fraction softer. But after retracting the electrically operated hardtop, a task completed in just 11 seconds, an extra layer of subjective speed seems to be added. A new exhaust system turns up the volume, too.

Speed is never in short supply in a 765LT Spider. When the roads aren’t glistening with winter frost, it will blast to 60 mph in 2.7 seconds and do a standing quarter-mile in 10 seconds dead. That’s hypercar-quick. And its top speed of 205 mph is identical to that of the coupe. It also looks sensational, particularly with the roof down. The hollow eye sockets also found on the 720S are flanked by air scoops and slashes, while the rear spoiler/airbrake profile is even more aggressive. McLaren might be less flamboyant than some of its rivals, but the LT’s dihedral doors and backlit engine bay, which glows red with mechanical malice, add some welcome street theater.

Covering zero to 60 mph in 2.7 seconds, the convertible has the same 205 mph top speed as the coupe.  Photo: Courtesy of McLaren Automotive Limited.

Inside, the Spider feels more pared-back and functional, with plenty of exposed carbon fiber. The Alcantara-wrapped steering wheel is pleasingly free of switches, and the instrument cluster flips downward in Track mode, providing a simple display with the rev counter front and center. However, the 8.0-inch touchscreen is dated and the hard-backed buckets aren’t as comfortable as the strategically padded “Senna seats” you’ll find on the options list.

Deploying 765 horses through two driven wheels is tricky when you’ve just spent 10 minutes chiseling ice off the windshield. Not surprisingly, the McLaren easily spins its tires in first, second, third and fourth gears . . . after which I sensibly decide to calm down. Once you have traction, though, the whooshing turbocharged thrust is ruthless and relentless.

Flewitt was right, though: the LT is exciting even at low speeds. Its hydraulic power steering, which is almost unique among new cars as even the likes of Porsche and Ferrari have switched to electric, is beautifully weighted and chattier than a daytime talk-show host. Visibility is also excellent for a mid-engined supercar, roof up or down, giving you more confidence in traffic.

The 765LT Spider offers enough compliance in its suspension for challenging roads. It doesn’t have the flawless composure of a 720S, but nor is it brittle or easily deflected. Turn-in is immediate and the chassis feels infinitely adjustable, all dictated by the Variable Drift Control and the angle of your right foot.

A steering wheel free of switches contributes to a cockpit that feels pared-back and functional.  Photo: Courtesy of McLaren Automotive Limited.

Priced at $382,500 apiece, only 765 examples of the Spider will be made, the same production total as the coupe. That’s either a hefty premium atop the 720S or a huge bargain over the less practical $1.7 million Elva. Either way, when it comes to a track-focused convertible supercar, the 765LT Spider has to be close to the top of that very elite list.