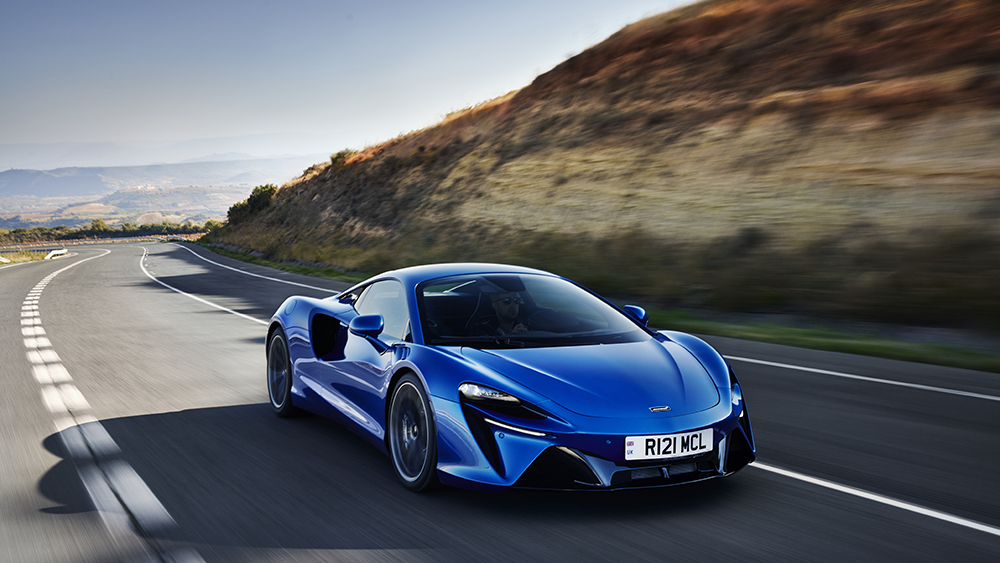 What’s happening in the high-performance automotive sector looks like a Top Chef challenge. Leading marques, operating under the same set of emissions restrictions, are picking from a common crate of power-train ingredients—a six-cylinder engine and electric motor—while trying to present the most tantalizing supercar du jour. Latest on the menu: McLaren’s 671 hp Artura.

During the past few years, McLaren Automotive has seemed to favor frequent model releases over substantial advancements in engineering and drive experience, impacting the perceived collectability of some of its most recent cars. Enter the Artura, which signals a return to late racer Bruce McLaren’s penchant for reinvention and innovation. Touted as McLaren’s first series-production hybrid, the Artura, starting at $233,000, represents a laundry list of firsts for the automaker (some more auspicious than others), including use of a V-6 engine in a road car and the introduction of the McLaren Carbon Lightweight Architecture (MCLA) platform.

Navigating Spanish traffic through the seaside destination of Marbella, the Artura feels like it may also be the brand’s first true daily driver, whether in Comfort, Sport or EV settings—the last of which offers an 11-mile range on battery alone. (There’s also a Track mode, which should be saved for, well, you know… ) Improving on the rattling side mirrors and echo-chamber cabin of the barely street-legal 620R and with more functional space than the 720S, this car is what we wanted the McLaren GT to be but with an agility on par with some of the marque’s more track-focused models.

Yet as far as sibling resemblance, the Artura seems closer kin to the 819 hp Ferrari 296 GTB. Both rear-wheel-drive machines feature a 3.0-liter V-6, with twin turbochargers set between 120-degree cylinder banks to lower the center of gravity, complemented by an axial flux electric motor (providing 94 hp in the Artura). And both have the shortest wheelbase in their respective manufacturers’ current stables, the McLaren measuring 104 inches versus the Prancing Horse’s 102.3-inch span—though at 3,075 pounds, the Artura’s dry weight saves 166 pounds over Maranello’s machine, thanks in part to the MCLA’s carbon-fiber monocoque tub and a new ethernet-based electrical system that’s 10 percent lighter than the outgoing iteration.

McLaren’s 671 hp Artura is a hybrid daily driver at home on any race circuit.  Courtesy of McLaren

The resultant athleticism is evident on the roads weaving to Ascari, a private racetrack in Málaga. The coupe’s stability at speed is due to a revised rear suspension and, especially, McLaren’s debut of an electronic differential. The combo’s effectiveness is driven home on the 3.35-mile circuit’s 26 turns and truncated straights, where the e-diff constantly optimizes the traction of each back wheel. Able to cover zero to 60 mph in 3 seconds flat, the Artura only hints at its 205 mph top speed before the carbon-ceramic brakes are required, able to scrub 124 mph down to zero in 413 feet. (Note: That’s 62 feet longer than required by the more potent 296 GTB.)

Heading back to the coast, there’s time to appreciate improved cabin ergonomics, including the engine-mapping selector that now sits on the steering column. Most noticeable are the seat adjustments; finally easy to reach and operate, they’re no longer the cruel exercise in frustration they’ve been on previous models. As with any relationship, small gestures go a long way, and it feels like McLaren has been listening.

It also feels like there’s a lot riding on the Artura. Admittedly, it doesn’t wow quite like the roughly $318,000 Ferrari 296 GTB, but it fits solidly between that model and the solely V-6-powered Maserati MC20, which it outperforms but is still the more comparable car in terms of power and price. How it fares in the near future must keep McLaren execs up at night. After all, the likes of Aston Martin and Lamborghini also have this production-hybrid recipe, and you know they’re busy cooking.