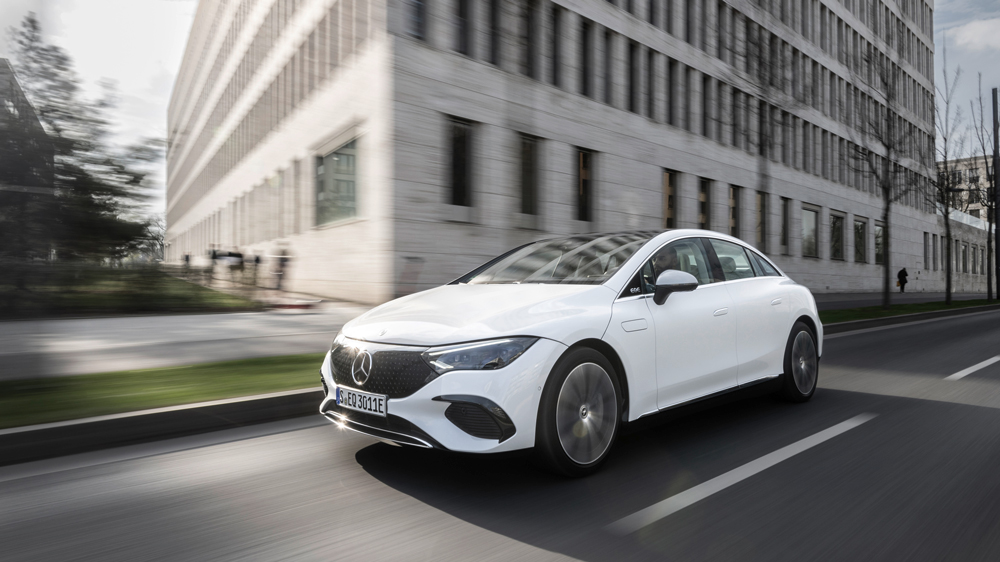 Following on the heels of Mercedes-Benz’s first electric vehicle, the EQS, the EQE brings much of its larger sibling’s technology to a midsized package. The latest EV in what the company promises to be nine electric models worldwide, the EQE sedan offers up similar dimensions to the Tesla Model S, but with a distinct Mercedes feel.

The EQE is built on the same electric skateboard architecture as the EQS, which dictates its cab-forward, short dash-to-axle proportions. And although both of the marque’s battery-powered production sedans lack the more upright, confident front end of the sexy Vision EQS concept car that informed these subsequent designs, don’t let the EQE’s jellybean silhouette fool you: The model stays true to the brand’s values with sumptuous materials and finishes, and matches or exceeds the in-car experience of its competitors.

“We were inspired by electronic devices, like iPhones,” says Bastian Baudy, exterior design lead for the model. “This was leading to the overall clean and full volumes.”

On a test drive of a European-spec model around Frankfurt, Germany, we find the EQE to be a finely balanced city navigator and highway cruiser. The EQE 350 that we’re piloting is powered by a rear-mounted, 215 kW synchronous electric motor that makes the equivalent of 288 hp and 391 ft lbs of torque. With a zero-to-60 mph time of 6.2 seconds, the EQE 350 lags behind offerings from Lucid, Audi and Tesla, but it offers plenty of output for passing slower cars on the Autobahn and traversing the gently undulating hills at the edge of the Taunus mountains. The drive is smooth and nearly silent, save for the strong crosswinds that are noticeable at highway speeds.

The synchronous electric motor makes the equivalent of 288 hp and 391 ft lbs of torque.  Mercedes-Benz AG

As with all EVs, there is the lack of a visceral, connected-to-the-road feeling, but those who have already adopted an electric-driving mindset will find the EQE comfortable and well-mannered. In the automaker’s EQ lineup, the paddle shifters have been assigned a new role: Instead of shifting gears, (after all, the transmissions in most EVs operate at a single speed), a click of the paddle up or down will adjust the level of regenerative braking. While the highest setting on the EQE is not aggressive enough for full one-pedal driving, the ability to change pedal feel on the fly yields both more efficiency and enjoyment than going three layers deep into a settings menu. And with the optional rear-axle steering, the car responds even more succinctly around tight curves and transforms narrow European streets and parking lots into easily maneuverable terrain.

In line with all Mercedes models, the EQE offers the marque’s suite of advanced driver systems, including adaptive cruise control, steering assist and lane centering features, to ease fatigue on long road trips. Using map data, the car can automatically adjust speeds in anticipation of corners, intersections and other situations. Most of the sensors are hidden behind the front face, which designers say is important to keep for brand recognition even though it’s not technically necessary for cooling.

Of the front end’s aesthetic, Baudy says: “With the black panel, we are trying to integrate as many components as possible. EQ vehicles are about efficiency and aerodynamics, because everything is about increasing the range.”

Although official range data for US cars has not yet been announced, the European-spec EQE is rated at about 410 miles, due in part to a svelte drag coefficient of 0.22 on the EQE 350’s 5,200-pound body. With DC fast charging, the sedan can go from 10 percent to 80 percent charged in 32 minutes. On a standard 240-volt outlet, full charging time is about 9.5 hours.

As one would expect from Mercedes-Benz, the cabin of the EQE is furnished with supple leather, quilted and stretched across elegantly sculpted seats, which, in this case, are in a pattern evocative of sprawling seashells. The cabin is wrapped in ambient lighting that sweeps across the dash and into the doors, and is highlighted around the air-vent control knobs and from beneath the floating instrument panel.

Unlike the gargantuan Hyperscreen found standard on the EQS, the EQE 350 uses a smaller, 12.8-inch central touchscreen, which still provides plenty of visual real estate. Although we prefer Mercedes’s sweeping horizontal displays, the portrait-oriented screen on the EQE sits higher up than on the newest S-Class sedan, preventing the driver’s eyes from wandering too far into the depths of the center console. However, the absence of the larger display leaves a substantial swath of wood trim across the passenger side, space which more than hints at what’s missing. When the EQE 500 heads stateside, we’re told the Hyperscreen will come standard.

The model’s 12.8-inch central touchscreen leaves a large swath of wood trim, though the EQS 500 variant will have the larger Hyperscreen when it arrives stateside.  Mercedes-Benz AG

The lack of a big front engine and center drive shaft means increased interior space for the EQE compared to the traditional gasoline-powered E-class. But one thing that may give Tesla and other EV converts pause is the lack of a front trunk, as the clamshell-style hood opens only for dealership service.

The German automaker still has some of the best voice recognition in the business, and simply saying “Hey Mercedes,” followed by natural voice commands, can start navigation, adjust the temperature, engage a massage or control nearly any infotainment feature. A large head-up display shows almost an overload of information; the display is so tall that it can interfere with a shorter driver’s line of sight.

In all, the EQE is posed to be a formidable choice for Mercedes loyalists and those ready to go electric but who value craftsmanship over speed. Says Baudy, “at the end, everyone is very emotionally attached to these cars.”