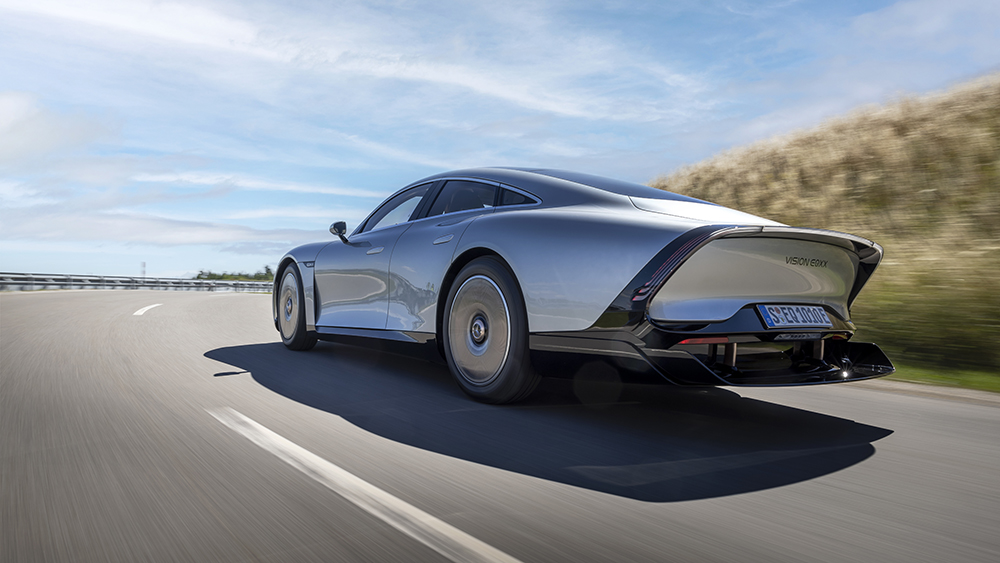 Imagine an all-electric sedan cruising, on a single charge, from Los Angeles to San Francisco—and back again. Or, in the case of the Mercedes-Benz Vision EQXX concept, making a record-breaking 747-mile run from the automaker’s base in Stuttgart, Germany, to the Mercedes-AMG Petronas Formula 1 team’s headquarters in Silverstone, England.

Robb Report recently had the opportunity to pilot the teardrop-shaped silver arrow around the serpentine Mercedes-Benz test track in southern Germany’s rural Immendingen region. Instead of chasing distance records, our goal was simply to evaluate this technical tour de force, which represents the automaker’s vision for all future road-going electric vehicles.

Under the floor, the EQXX has a compact, energy-dense 100 kwh battery that’s 50 percent smaller and 30 percent lighter than the comparably powerful pack that motivates the marque’s current flagship EV, the EQS. That power-train configuration, and the engineering team’s focus on radical streamlining, made it possible to reduce the car’s drag coefficient to only 0.17, lower than that of any current production vehicle. That high rate of slipperiness can make for some spooky sensations, as when lifting off the throttle on a flat section of the track—with no discernable effect on the vehicle’s speed. The car just coasts. And coasts, and coasts.

Tipping the scales at just 3,896 pounds, the EQXX is a waif compared to the EQS 580’s 5,888-pound heft. Less weight means less power is needed to move the vehicle; the modest, 241 hp electric motor delivers a zero-to-60-mph time of seven seconds flat, a far cry from the record-shattering acceleration of many new EV prototypes but true to the car’s purpose of prioritizing distance over outright quickness. Plus, the EQXX feels showroom ready with its eco-friendly, Jetsons-like interior made from cactus fibers, bamboo, mushroom roots and vegan silk. It’s an inviting enclave for the long haul—which, with this range, is exactly what you’re in for.