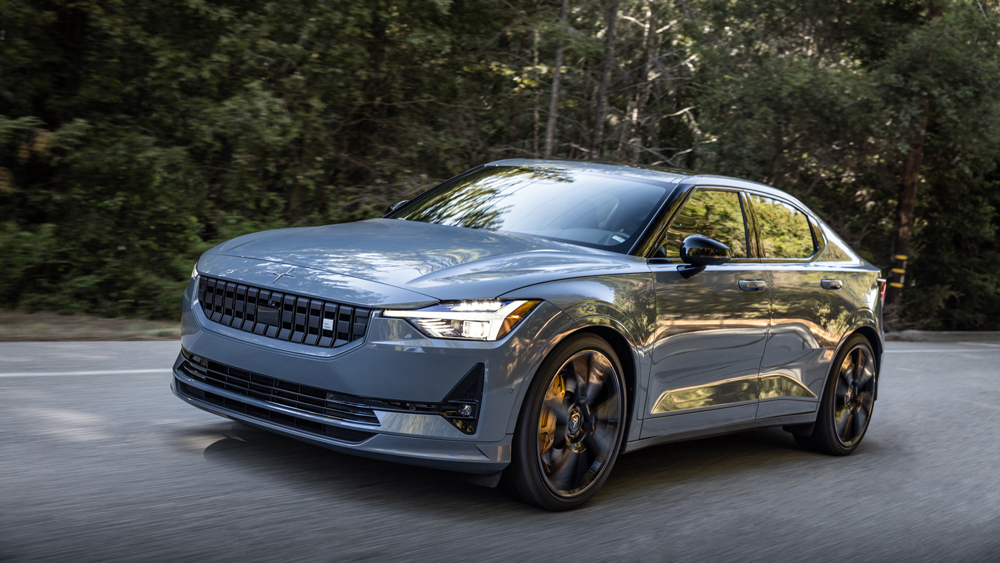 High up in the hills south of San Francisco, redwoods drop needles and shade the roads as banks of mist roll in off the ocean, blurring light with shadow between smatterings of gentle rain. The coastal climate creates the perfect environment to test out a Polestar 2 equipped with the new high-performance “BST Edition 270” package.

Driving at speed in the souped-up EV requires my full attention as I rip through the rises and curves with instantaneous torque pressing my neck back against the headrest at the start of every straightaway. The top-end power builds at high speeds, too, but more importantly, numerous suspension revisions create a low center of gravity and a taut yet supple ride that this now-sporty four-door always deserved.

Polestar began work on the BST, pronounced “beast” by most in attendance at the test drive, after the positive response to an experimental Polestar 2 that was unveiled at the 2021 Goodwood Festival of Speed. The BST now enters production bearing a total of 166 discrete changes compared to a “base” all-wheel-drive Polestar 2 with the optional Performance Pack, largely focusing on chassis tuning highlighted by lower, firmer springs and a set of manually adjustable Öhlins shocks with remote reservoirs up front. New 21-inch wheels, reminiscent of the Polestar 1, wear Pirelli P-Zero tires that provide more grip than the Continental SportContacts on the base version—though all wear 245-millimeter rubber at all four corners.

The “270” in the moniker refers to how many examples Polestar plans to build, and all 47 slated for stateside delivery have already been sold. Other than the wheels, an optional graphics package over Snow white and Thunder grey visually differentiates a BST from its lower-spec siblings, as does a ride height that’s lowered by nearly an inch, dropping the boxy Scandinavian body noticeably closer to the tires.

The Polestar reps on hand gave us a quick rundown on the two pre-production cars currently available in the US, which are not part of the 270 count. They then let us loose into the hills with the Öhlins set to seven clicks from their firmest adjustment out of a total of 22 settings. Navigating through the neighborhood of nearby Hillsborough, I played with the Polestar’s native infotainment screen and chose the drive modes that seemed most applicable for the winding roads ahead: electronic stability control set to Sport, steering set to Firm, and regen on Standard.

By now, just about everyone knows that instantaneously available torque makes electric vehicles very impressive in a straight line, but I found myself very curious to experience how well a skateboard battery platform, with focused suspension tuning, might perform given the model’s hefty curb weight of around 4,650 pounds.

Then a conundrum arises: the choice between trail braking through corners or switching over to throttle modulation (if we still call it that) so that regen does the job alone. Either way, keeping the front springs compressed allows for sharp turn in, while the Öhlins still manage enough damping to keep most road imperfections all but imperceptible.

As the BST starts a gentle lean onto the outside wheels, the advantages of rear-biased all-wheel-drive power delivery transform my Polestar 2 into what feels like a rally car, and I imagine the surrounding redwood groves to be the back roads of a remote Swedish rally stage, but without the screaming fans or internal-combustion cacophony. Instead, unlike on conventionally powered sports cars, the tires talk to me throughout the whole drive, rather than shouting in protest over the sound of a gasoline engine.

And much like an AWD rally car, the BST asks for a bit of confidence as the front wheels pull out of curves early, then the rears catch up, the battery weight plants, the Pirellis grip, and the dual electric motors unleash every ft lb of torque once again.

Even with the rear-biased power delivery, so much low-end grunt still produces a bit of torque steer. I find the sensation almost entertaining, not nearly as bad as the Polestar 2 in Long Range Single Motor trim, which can almost create Porsche 911-esque throttle-liftoff oversteer due to the front-wheel regen and often becomes a handful during aggressive driving. On the BST, switching the steering assist back to the mid-level Standard actually helps to improve feedback and precision—another surprise compared to most sports cars, but in this case, too much assist simply muddies the water.

The Polestar 2 BST Edition 270 never reaches the gut-punch burst of brutality that helps high-performance Tesla trims, the Audi and Porsche siblings, or a Lucid Air dominate drag strips on YouTube. But with a range estimate of only 247 miles for the AWD variant, this is still very much a city car, and the standard AWD Polestar 2 equipped with the Performance Pack already performs quite nicely, able to absorb more bumps with aplomb. In that car, the firmest steering is definitely best, likely in part thanks to the 20-inch wheels and higher-profile tires.

The BST’s springs and shocks, on the other hand, pair well with the skateboard platform and noticeably reduce body roll, though a few sharp dips yanked the whole chassis around a bit due to the skateboard’s rigidity. Luckily, the Öhlins calm such moments down almost immediately.

I left the Redwoods behind, wishing for a chance to test the Öhlins out while fully softened to 22 clicks on the dial. Overall, the BST’s relatively modest changes reveal true potential for the sporty driving dynamics of commuter electrics—a sign of how far we’ve come in shockingly little time. No, our afternoon wasn’t a true track test (and Polestar decided against automatically turning down regen to prevent the battery from heating up, since range still matters more to buyers than all-out performance, even on the BST). But this fun demonstration of the Polestar 2’s nearly maxed-out capabilities should serve well as the rollout of future models takes a bit longer than perhaps expected.

The limited production run, however, makes this something of a stopgap in that regard. Priced at $75,500 plus options, the BST tops Polestar’s lineup until the 3 and 4 crossovers, the stately 5, and the recently confirmed 02 Roadster concept enter production. As far as electric fun for a day in the woods goes, though, this eminently capable EV certainly lives up to its “beast” of a name.

Click here for more photos of the Polestar 2 BST Edition 270.