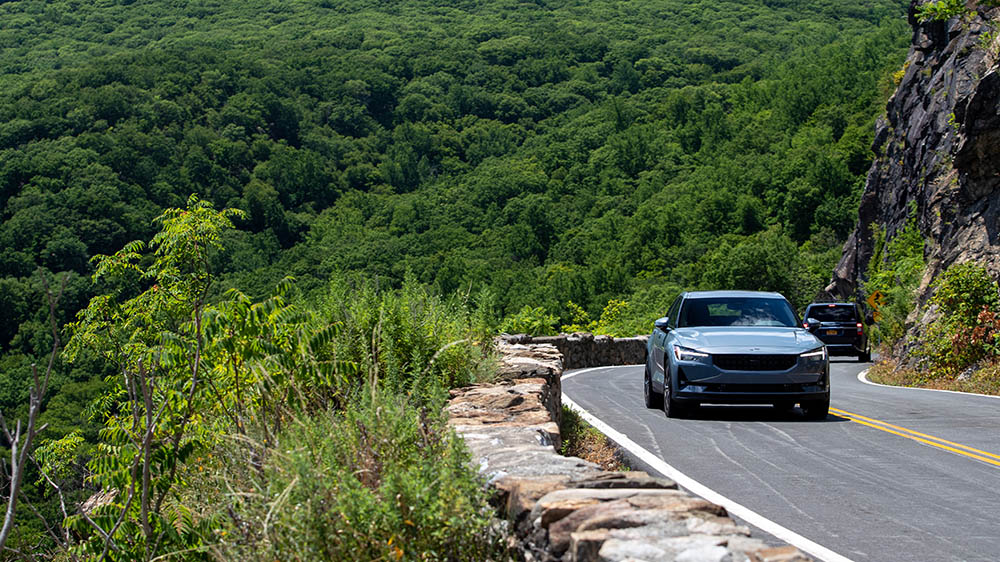 Like many others, my world has felt so much smaller than I’m used to since the beginning of the coronavirus outbreak. As a Brooklynite who doesn’t own a car, I spend almost all of my time, at least since March, within a five-mile radius of my apartment. So, when the chance to drive the new Polestar 2 came around, I leapt. But I was also a little nervous. Having not been behind the wheel of a car for eight months, I wasn’t sure this was when I should be test-driving an electric vehicle for the first time.

As it turns out, there was nothing to be worried about. Polestar’s second offering, although its first to be completely powered by battery, takes all of a few minutes to get used to. From the still-clogged streets of midtown Manhattan to the forest roads surrounding West Point in upstate New York, the Polestar 2 is precise in its handling and easily powers through the curves and long straightaways alike.

The all-electric Polestar 2.  Photo by Beadyeye, courtesy of Polestar.

A fully electric power train isn’t the only way Polestar’s latest model differs from its predecessor, the hybrid-powered Polestar 1 coupé. The marque’s first offering is elegant and sleek, two words no one would use to describe its new five-door fastback. That’s not to say the new EV is lacking in the looks department, but its minimalist styling, which has more than a few touches of sibling company Volvo’s design language, won’t win any beauty contests either.

The interior, however, is another story entirely. Like the Polestar 1, the new model features an innovative cabin comprised exclusively of vegan materials. Despite this, everything from the steering wheel to the seats to the dash feels of the utmost quality. The real centerpiece, though, is the world’s first built-in Android Automotive–powered infotainment system with a massive vertical touchscreen display. The latter allows you to intuitively check on vehicle status, access navigation aids or select from a raft of entertainment options. But you don’t even have to touch the screen since the voice-controlled Google Assistant actually works, and almost instantaneously—a rare occurrence among other systems.

Inside the Polestar 2’s futuristic cabin  Photo by Beadyeye, courtesy of Polestar.

Of course, as important as looks may be, they’re not why anyone buys an EV, at least not yet. I’m more focused on its drive characteristics. It takes a few blocks to get used to how quickly the car slows down once you ease off the accelerator, thanks to its regenerative braking, but once I’m accustomed to that, the car is a breeze to maneuver. Whether in stop-and-go-traffic or speeding along the Palisades Interstate Parkway, I’m floored at how stable yet responsive the car is, no matter the sharpness of a turn. It also helps that my tester is outfitted with the optional Performance Pack, including adjustable Öhlins dampers, gold four-piston Brembo front brake calipers and Continental SportContact 6 tires.

As far as acceleration, there’s none of the slingshot effect often experienced in some traditional gas guzzlers. This delivery is smooth and easy to maintain. The vehicle’s two motors, which split power evenly between the front and rear axle, have a combined output of 408 hp and 487 ft lbs of twist, something which becomes especially clear once I get out on the wide-open road.

And while the car’s 127 mph top speed will not come close to being reached on this day, the Polestar 2’s ability to cover zero to 60 mph in 4.45 seconds has already proved to come in handy more than a few times. Of course, range is always in the back of my mind. While the company is still waiting on the official EPA assessment in that category, it’s expected to be at least a couple of hundred miles.

The Polestar 2 can cover zero to 60 mph in 4.45 seconds and reach a top speed of 127 mph.  Photo by Beadyeye, courtesy of Polestar.

Pulling up to the drop-off in Chelsea at the end of the day, I’m surprised at my impending sense of separation anxiety. Perhaps the greatest testament to the Polestar 2 is that, on my subway ride home, I may have to seriously consider becoming a car owner again.