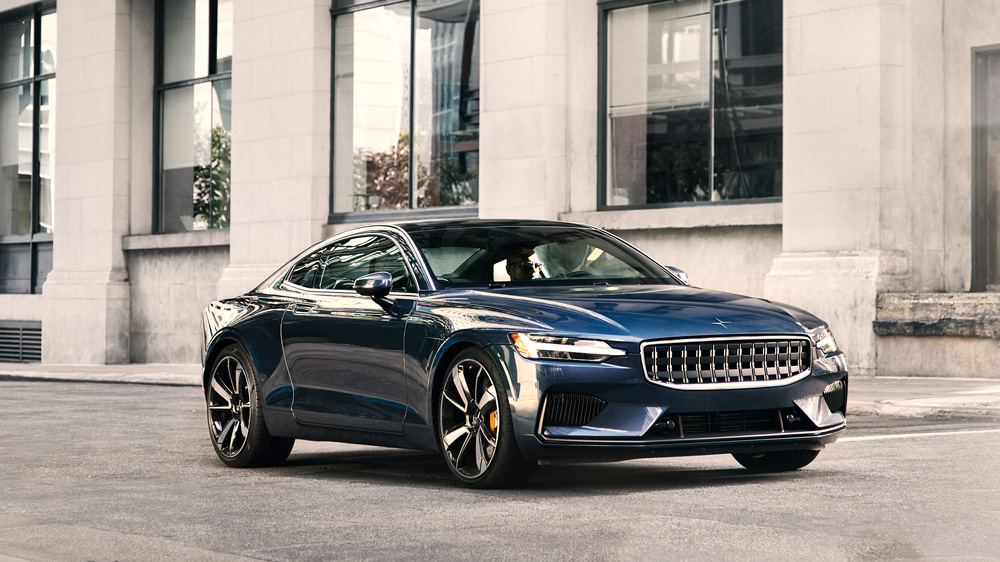 Northern California’s Skyline Drive is not a forgiving place for cars that haven’t gone to finishing school. The two-lane road, which snakes along the crest of the Santa Cruz Mountains just west of Silicon Valley, features incessant off-camber turns, frequent elevation changes and constantly shifting shadows. Horse and rider must be one, or disaster looms.

All by way of saying that the very first automotive offering from Polestar, a sports car yin to sister company Volvo’s domestic yang, instills enough confidence out of the box to turn Skyline into the adult roller-coaster that is rightly feted by so many two- and four-wheeled fanatics.

Called simply Polestar 1, the two-door is aimed squarely at the Porsche Turbo and Mercedes AMG GT crowd. And it competes with those established marques in price ($155,000 plus $5,000 for a matte paint finish), performance (619 hp and 738 ft lbs of torque from its hybrid gas-and-electric motors) and predictability (available all-wheel drive and a dialed Öhlins suspension).

Deliveries of the coupe start in January. Polestar says it will make only 500 examples per year for three years. Consider the Polestar 1 both a halo car and an appetizer. Later in 2020, the company will release its all-electric four-door Polestar 2, a far more proletarian product with echoes of the Tesla Model 3 that will range from around $45,000 to $65,000. But if Polestar 2 is for the masses, Polestar 1 is for the must-have-one-first crowd.

In his presentation, Polestar CEO Thomas Ingenlath took great pains to show how this car from the company that brings you Swedish people-movers is not a Volvo. The evidence he laid out included slides of minimalist showrooms bathed in stark light, as compared to, one imagines, Volvo showrooms bustling with kids and canines. There’s also the tailored-suit look of the Polestar 1 that seems designed to cruise down Fifth Avenue as compared to a Volvo Cross Country’s shopping mall run. But the familial tie exists in the Volvo-derived dash of the sports car, a move made “because it works and we are proud of it,” Ingenlath noted.

It remains to be seen whether that overlap will turn off some exotic-car shoppers. If it does, that would be a shame. A day spent hammering a matte grey Polestar 1 revealed a sports car that not only begs to be driven but also one that has created its own emotional fingerprint.

Polestar plans to build 500 examples per year during the model’s production run.  Photo: Courtesy of Polestar.

Much of the fun happens in Power Sport mode, one of four drive settings that include EV only (offering roughly an 80-mile range), AWD (works the front-mounted, turbo-charged four-cylinder in tandem with the rear-wheel electric motors) and Hybrid (the default setting).

We set out in Power Sport and then dropped the shifter into a setting that boosts the regenerative prowess and promotes more one-pedal driving, even though the vented and drilled Akebono brakes come on fast. For about 90 minutes, the Polestar 1 drove along Skyline as if it were on rails, with a minimum of drama from the chassis and great communication from the steering wheel. That confidence was critical given the number of cyclists that ply this route, requiring motorists to frequently switch from light speed to a lane-straddling crawl and back again.

Deliveries of the Polestar 1 are scheduled to begin in January.  Photo: Courtesy of Polestar.

One let-down was our own doing, when too much Power Sport fun and not enough regen-braking drained the Polestar 1’s battery to zero. The coupe then had to rely solely on its turbo combustion engine. While that’s good for 326 hp, the absence of the two electric motors on a car packed with heavy LG Chem batteries was noticeable, a bit like listening to Led Zeppelin in stereo and suddenly losing one speaker. Battery power is key to Polestar 1’s split personality.

If the crowds that gathered around this car at remote state park lots and downtown Burlingame are any measure, Polestar has built a good buzz and delivered on it with this coupe. Most people actually knew what the vehicle was, and those who didn’t lingered even longer. Smart move. Given the Polestar 1’s limited production run, you’re more likely to see a shooting star than this automotive luminary.