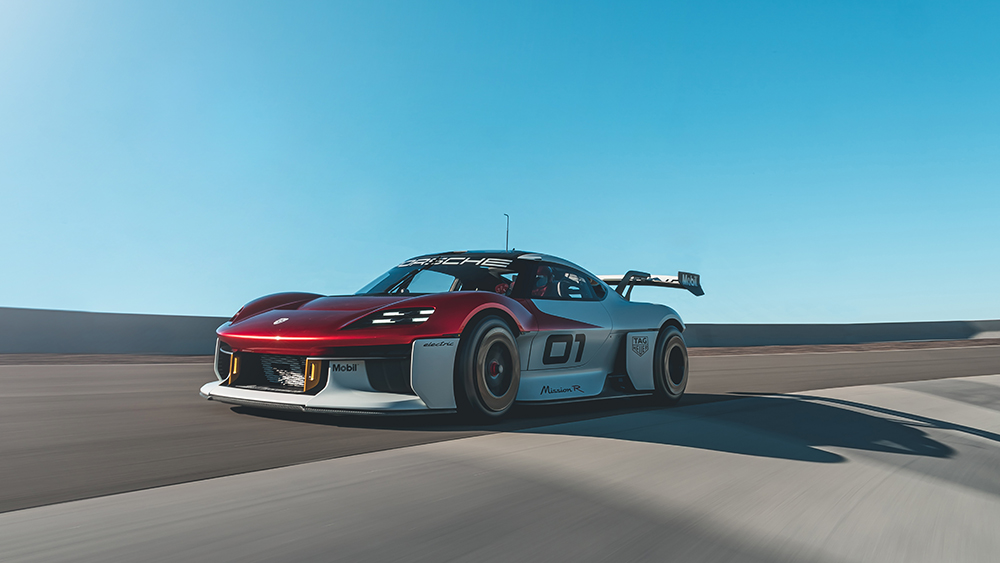 The machine you see here is a 1,073 hp, four-wheel-drive, electric Porsche race car. It’s not a 911, the ’60s-born teardrop that everyone knows, but it might be more important. The 2021 Porsche Mission R isn’t even a real production car: Only one has been built to date, costing around $10 million, and it’s not for sale even if you have the money and the personal phone numbers of Porsche’s entire executive board.

The Mission R is a concept, unveiled at last year’s Munich auto show, built to gauge public interest in electric motorsport and, more consequentially, to hint at the next version of Porsche’s entry-level sports car, the 718 Cayman. It’s also a driveline testbed, since the next 718 will reportedly be EV-only, with no hybrid or gas model offered. The race car’s 80 kwh battery and inverter spit 908 volts—just 92 shy of the international motorsport safety limit—and much of the drivetrain is cooled by a proprietary oil system developed on Porsche’s Le Mans–winning 919 prototype. The composite body is part organic, resembling carbon fiber but based in flax. Each axle wears one drive motor, and that 1,073 hp figure is available in only short-burst “qualifying” mode, with longer runs limited to around 671 hp.

A rear-view look at the Porsche Mission R.  Robb Rice

Concept cars rarely run or drive well. This is different, both a finely honed mix of purpose-built parts and components borrowed from pro-racing 911s (mostly in the FIA GT series) and a fully dialed machine on Michelin racing slicks. Our test took place at Porsche’s dense little Experience Center track in Los Angeles, where the car slid and whined and whirred, equally forgiving of errors and insistent that you avoid them. The steering was immediate, even for a race car, the grip was immense and the acceleration was perpetually good for a wallop in the back, even as the near-silent motor was outshouted by gearbox whine that filled the tiny yet airy cockpit. As with most mid-engine cars, and all mid-engine Porsches, the tires worked in delicate balance with each other, though the way the car carried its mass—low and in the middle—was unmistakably EV. Remarkably, the battery can be freshened from 5 to 80 percent charge in just 15 minutes, a feat we witnessed multiple times.

Perhaps more remarkably, the German engineers present were against type, talkative and interested in feedback. The overall sense was of a legacy-steeped company trying to define what it should be going forward, while aware of all the many ways in which those considerations might not align. Yet the Mission R felt every bit a Porsche: fast, predictable, eminently communicative—a car you want to keep driving. In a certain light, it seemed even more of a Porsche than the hallowed 911, because it was built to look only ahead, while the 911 is a nearly 60-year-old idea dragged into modernity.

The steering wheel of the racer.  Robb Rice

This is important, because there is supposedly no hybrid or electric 911 in the works. That model, a company head recently insisted, “will stay combustion-engine as long as possible.”

Why not start your revolution with the biggest name in the stable? Because when you grow synonymous with a specific idea, you change that idea slowly. The 911 began life as the core of Porsche’s image, and its cashflow; now, it merely represents the former, its profits dwarfed by those of the company’s immensely successful SUVs. On a long enough timeline, an electric 911 will happen. For now, we have this. Question and answer in one. Silent and potent. Portentous, even. But mostly a hell of a lot of fun.