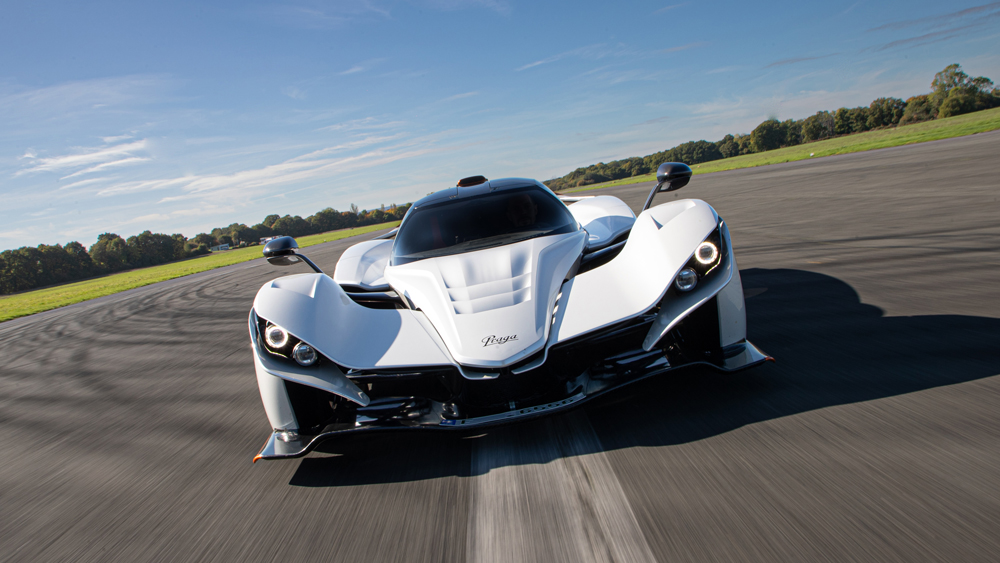 Would you part with $1.28 million for a new hypercar built by a company you’ve never heard of, from a country with no history of making very-high-performance cars? And what if it was powered not by the hybrid or fully electric power-train configurations we now expect in such models, nor by an aristocratic and exquisitely engineered V-12, which most of us still want, but instead by a heavily tuned and turbocharged Nissan V-6?

The new Praga Bohema, revealed today and which Robb Report has already driven, has some work to do if it’s to persuade those who already own the rarer and more extreme Ferraris to add a car from the Czech Republic to their collections. But it has two advantages.

Firstly, circumstances may actually be on its side. Although hypercars, in general, may be going electric, off-the-record conversations with industry contacts indicate that sales of some pure-electric versions are proving tricky. Neither the fully electric Rimac Nevera nor its sister car the Pininfarina Battista, each limited to 150 examples, has yet sold out. But there remains strong appetite among collectors for cars with pure internal combustion engines.

Gordon Murray’s T.50 and T.33 will both be built in runs of 100 and sold out quickly, the T.50 within 48 hours. And while both have a far more famous name behind them, and a bespoke Cosworth V-12, they also have much higher prices. The Praga’s gas engine might not be the most exotic, but this might be your last chance to order a hypercar powered solely by one. Even Gordon Murray, a longtime hybrid skeptic, has admitted that all his future cars will be at least partly electric, and one Praga executive admitted that they’re “cutting it fine”. That might be to their advantage. Only 89 will be made, so you might need to move fast.

So what is Praga? You might be surprised to discover that it’s actually 115 years old. In the 1930s, it made aircraft and more cars than Skoda and Tatra—the Czech Republic’s better-known carmakers—combined. Communism wasn’t kind to the marque, though, and it ended up making trucks and transmissions. Now in private ownership, Praga began making race cars 12 years ago. A few of those were fitted with license plates, but the Bohema is its first bespoke hypercar designed for road use, even if Praga knows most customers will drive theirs straight to a circuit.

Like the Rimac Nevera, which also hails from a country, Croatia, with no previous history of building such cars, the Bohema has been designed and engineered almost entirely in-house. The engineering brief was clear: to be comfortable and usable on-road but also the quickest street-legal car on a circuit, prioritizing minimal weight and aerodynamics over extreme power. The goal was also to equal the lap times of a GT3-class racer on semi-slick tires.

So the bodywork has a job to do, generating 1,984 pounds of downforce on the 2,165-pound Bohema at 155 mph, melding the tires with the Tarmac under cornering, while keeping drag low and feeding cool air to that oxygen-hungry turbo engine. But Juraj Mitro and Jan Martinek, the chief designer and chief engineer, respectively, have also made it beautiful, and therein lies its other immense advantage. They turned the Bohema’s semi-detached, race car–like panels into a work of futurist art, seemingly in motion when standing still.

Our favorite stylistic details include the impossibly long and elegant arms on which the wing mirrors are mounted, which extend from the central fuselage to the edge of the car and are almost level with the roof. Then there’s the vast, subtly curved and low rear clamshell, which tells you how low the mass sits in the chassis. It’s stunning, and a repudiation of the notion that aero now forces such cars to look generic.

The originality continues inside. You enter downwards, through what is more a hatch than a door, into a cockpit so tight that the two egg-shaped seats have to be arranged with the passenger lower and slightly behind the driver so their shoulders don’t clash. It’s remarkably comfortable though, with a motorsport-meets-luxury aesthetic unlike anything else on the road. And it’s all beautifully finished in carbon, Alcantara and milled aluminum.

Once the flyweight hatches are latched shut and the race harnesses pulled tight, it’s time to fire the 3.8-liter, 700 hp twin-turbo V-6. It’s loud and gruff, but not intrusively so, and the changes from the race-spec Hewland sequential manual gearbox go in with a purposeful, audible “thunk” but aren’t jarring. At low speed, visibility and maneuverability are surprisingly good for what is effectively a barely road-legal Le Mans racer, and with 1.7 cubic feet of bespoke suitcase in each sidepod, you can easily imagine taking a road trip in your Bohema.

But that’s not its primary purpose. When the road—or more likely track—opens up, the car’s acceleration is utterly savage. Even if it can’t quite match the instant torque and all-wheel traction of a Nevera, it’s still terrifyingly on the boundary of your brain and body’s ability to cope. The hiss and flutter from the turbos’ wastegates, once thought unrefined, just add to the character in this increasingly electric age, and the noise, ferocity and mechanical nature of the performance are almost enough to convert this long-term EV advocate back to gas.

Refined by Formula 1 and IndyCar star Romain Grosjean, the handling is sublime too, the Bohema’s lightweight nature palpable in its ever-level posture and its zero-lag response to every steering input. And, of course, it sheds speed as hard as it adds it, the carbon-ceramic discs leaving you hanging in the six-point belts before pressing you back into your seat again as you exit a bend.

A Porsche Taycan as a daily driver and a Praga Bohema for the weekends seems a good way to see out the gas age. The vocals may be gruff, but this makes a fine swansong for the internal combustion engine.

Click here to see more photos of the Praga Bohema.