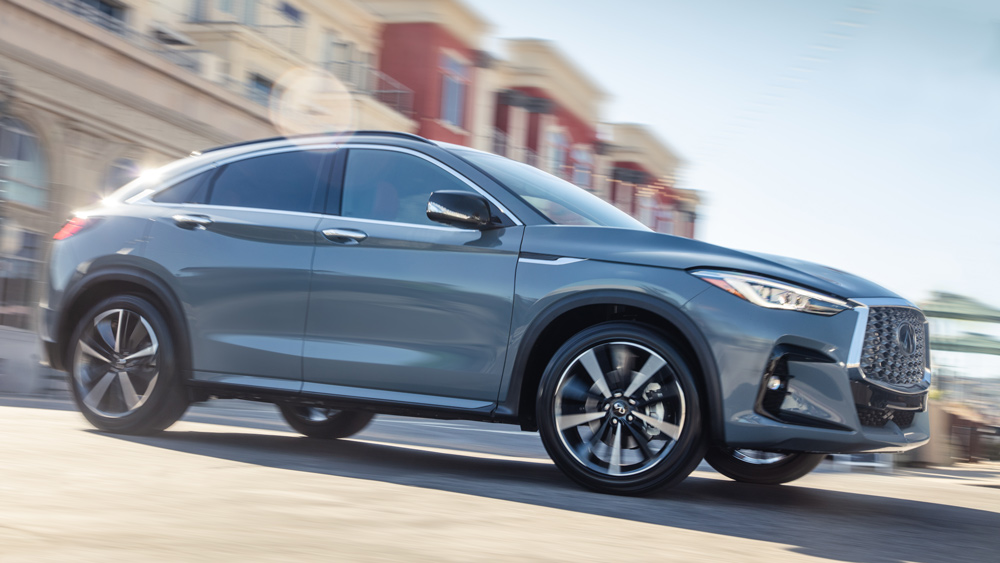 The SUV category, once comprised of high-function, low-frills trucks converted from military and farm use, has fragmented over the last decades as automakers began chasing increasingly specific demographics. And the 2022 Infiniti QX55, dubbed a “luxury crossover coupe,” is targeting an extremely specific slice of the market, according to the company: single, no children, early adopter for everything from tech to travel.

It’s unsurprising, then, that the vehicle often feels like a smaller car. It’s certainly not a crossover that makes one consider even a tame fire-road excursion, let alone true off-road adventure, but it’s plenty happy on a coastal run or slicing through city traffic—which, of course, is precisely what it was designed for. What was pleasantly unexpected was the QX55’s precision while navigating canyon roads. The adroit handling is due, in part, to the four-wheel independent suspension and the marque’s Active Brake Limited Slip system, which enhances lateral athleticism by arresting the 20-inch wheels (dressed in all-season run-flat tires) individually, as needed.

Power delivery also impressed. With 268 hp and 280 ft lbs of torque, the QX55 isn’t exactly a track machine, but for a vehicle weighing around 4,150 pounds, it’s good for a spirited commute. The variable-compression, 2.0-liter turbocharged four-cylinder engine is mated to Infiniti’s Continuously Variable Transmission and its shift-by-wire configuration, which makes for just the right measure of punch when needed, even at slower speeds, and smooth response when paddle-shifting in manual. Driving dynamics can be further fine-tuned using the four drive modes: Standard, Eco, Sport and the customizable Personal.

My pre-production model, painted Slate Gray and complemented by Monaco Red-and-Graphite cabin accents, seemed to have all the exterior and interior polish of one off the showroom floor. But some of the driver assists in the tester’s ProPilot Assist suite, although intuitive enough to activate, did not perform consistently, and even when they did my confidence was not as high as with those from other brands; the steering assist and lane centering functionality, in particular, lacked the expected precision.

The grille takes its design cue from the Japanese art of origami.  Photo: Courtesy of Infiniti.

The QX55, offered in three trim packages and starting at $46,500, takes inspiration from the marque’s pivotal FX model introduced nearly 20 years ago. Made through 2013, the FX became the brand’s definitive SUV and earned an ardent following.

“In the same way the FX provided an instantly recognizable silhouette and helped put Infiniti on the map, the QX55 is, in many ways, our modern-day provocateur,” Infiniti chairman Peyman Kargar recently told Robb Report.

“The entire profile we tried to make as sleek as possible and, together with the side-window graphics, there’s that clean dynamic arch,” says Taisuke Nakamura, Infiniti’s global head of design. “This is one of the visual tricks to make the car look sportier, but still maintain enough room for the rear occupants and luggage space.”

The car’s real highlight, however, is the cabin. From the prominent line, reminiscent of a calligrapher’s ink stroke, flowing from the dash through the center console, to the open-pore maple trim, the interior exemplifies Japan’s considered, artful aesthetic. Plus, the two-touchscreen infotainment system and nine-inch head-up display rival interior amenities found in some models twice the price; an optional 16-speaker Bose Performance Series sound system is also available.

The console’s sweeping center line is reminiscent of a calligrapher’s ink stroke.  Photo: Courtesy of Infiniti.

The QX55 is presented in Luxe, Essential and Sensory trim packages, with our top-tier Sensory example fully optioned at $58,770. According to Infiniti, the entry-level model goes after Land Rover’s Range Rover Evoque and Audi Q5, while the premium versions have the BMW X4 and even the Mercedes-Benz GLC Coupe in their sights. After piloting the Japanese automaker’s new release, two ideas became clear: why there’s a demand for gentrified crossover coupes, and that Europe’s best should watch their backs.