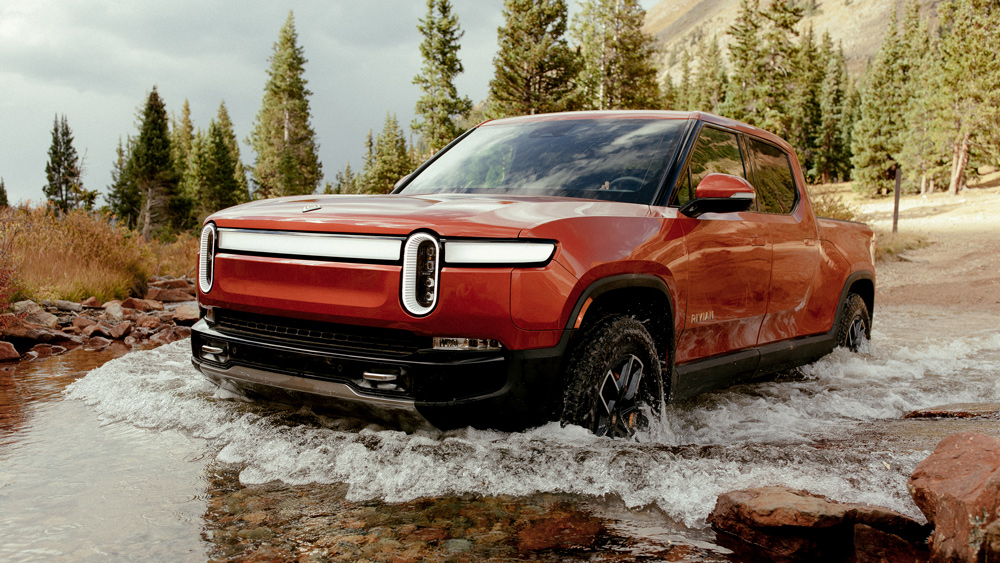 It’s a steep climb up Wise Mountain. At more than 12,000 feet above sea level, the trail that ascends the tree line in the midst of the Rocky Mountains is one of the highest in Colorado. Most gasoline-powered cars here would be wheezing for air, much like those of us visiting from coastal regions, alternately sucking on cans of oxygen and stainless-steel water bottles. But the Rivian R1T electric truck progresses easily and almost silently up the route, with only the sound of crunching rock piercing the morning air.

It’s been a proverbial long climb for the electric-vehicle (EV) startup as well. Founded as Mainstream Motors in 2009 by MIT grad R.J. Scaringe, the company that later became Rivian was easy to dismiss as just another techie pipe dream when it showed a prototype sports car in 2011. In the years that followed, other EV startups appeared and struggled, or disappeared altogether: Nikola, Byton, Faraday Future, Lordstown Motors—all hoping to jump on the Tesla bandwagon and woo drivers with cool designs, name-brand executives and the promise of zero tailpipe emissions.

The all-electric Rivian R1T takes on one of Colorado’s many trails.  Photo by Elliot Ross, courtesy of Rivian Automotive LLC.

Meanwhile, Scaringe and his team continued to toil, shifting their focus to trucks and utility vehicles and perfecting the marque’s hardware, software and business model. Rivian showed its first truck and SUV at the LA Auto Show in 2018, garnering the attention of not only the media and the public, but also some executives with deep pockets.

Not long after, Rivian got a $700 million investment led by Amazon. Just a few months later, Ford followed with a $500 million infusion, an unusual move considering the stalwart US manufacturer is launching its own lineup of electric vehicles, including the F-150 Lightning which, according to a Rivian spokesperson, shares no components or software with the EV startup.

On the road, the truck is smooth, responsive and quiet.  Photo by Elliot Ross, courtesy of Rivian Automotive LLC.

On the craggy peaks outside of Breckenridge, a cadre of Rivian employees cheers as our test truck joins them at the summit. They are mostly engineers, with a smattering of designers, marketing executives and public-relations specialists. Not one looks close to 40 years of age, and each seems just as eager to be pushing the R1T to its limits as the small group of journalists invited here to drive. There’s a close-knit, casual, Silicon Valley–esque feel to them, which is not surprising since many of the Rivian group come from outside the automotive world. But it’s also clear that they realize the gravity of this moment, as they sit on the precipice of delivering the first round of vehicles to paying customers.

The Rivian R1T starts with a “skateboard” platform with a battery pack integrated into the vehicle frame. It’s powered by four electric motors—one on each wheel—for a total output of more than 800 hp and 900 ft lbs of torque. At high altitude, electric motors have the advantage of losing less power when the air gets thin compared with their naturally aspirated or turbocharged gas counterparts.

The R1T is able to continuously adjust torque and power at each corner, maximizing traction.  Photo by Elliot Ross, courtesy of Rivian Automotive LLC.

Towing capacity for the R1T is rated at 11,000 pounds, and its payload capacity is claimed to be 1,760 pounds. Charging can be done with both J-plugs and CCS plugs, with range for the large battery pack estimated at 314 miles. The battery pack and drivetrain are covered by an eight-year/175,000-mile warranty, with a comprehensive warranty of five years/60,000 miles.

Because each wheel is powered independently, the R1T is able to continuously adjust torque and output at each corner, maximizing traction and easily extricating us from piles of loose rocks and slippery mud as we crawl up the trail. A maximum ride height of 14.4 inches helps us clear bigger boulders and rushing streams, with extra protection supplied by the reinforced underbody.

Settings are easy to select, simply tap “Offroad” mode on the large center screen and choose from Auto, Rock Crawl, Rally, or Drift. The regenerative-braking feature, when set to maximum, essentially acts as hill-descent control when going down steep grades. The kind of jostling one gets from a hardcore off-road descent could send some running for the nearest barf bag, but Rivian’s independent air suspension—with active damping, along with an electro-hydraulic roll-control system (in lieu of a mechanical anti-roll bar)—keeps the vehicle stable enough that we don’t need Dramamine (or a chiropractor) after several hours on rough terrain.

Of course, most R1T owners won’t be taking their trucks to the outer reaches of the wilderness. On the road, the truck is smooth, responsive and quiet, with options to adjust the levels of brake regen and the stiffness of the ride.

Much of what makes the R1T so appealing is its friendly, yet still rugged, design. The aesthetic is a kind of modern-day FJ-Cruiser-meets-Apple store, conceived by Jeff Hammoud, a former Chrysler designer who started with Rivian in 2017.  Over hot chocolate and toasted marshmallows the night before our off-road adventure, Hammoud tells us that he and his team wanted to make an impactful statement at first sight, and found inspiration in simplicity and functionality.

The large, horizontal screen serves as the command center for nearly all vehicle functions.  Photo by Elliot Ross, courtesy of Rivian Automotive LLC.

The result is a distinctive design, led by a front face that is approachable and instantly recognizable. One of the key features of the R1T is what Rivian calls the “gear tunnel,” a pass-through storage space between the cabin and the bed that can stash everything from carry-on luggage to the optional camp-kitchen setup—complete with a two-burner induction cooktop and Snow Peak titanium dishes and utensils.

Inside, matte open-pore wood stretches across the instrument panel. All interior materials are vegan, with the microfiber headliner and textile floor mats made completely from recycled elements. The large, horizontal screen is intuitive and serves as the command center for almost all the vehicle functions. Nearly everything is controlled digitally, even the air vents, which change direction by dragging a finger around on a corresponding screen icon. Other common switches, such as those for the side mirrors, have been replaced by buttons on the steering wheel.

The R1T isn’t without its flaws, however. We were left shaking our heads at the tiny digital volume slider, which is difficult to modulate on the freeway or when going over bumps, resulting in us accidentally blasting out our passengers more than once. Notably, early versions of other manufacturers’ digital interfaces, including Ford’s SYNC and Cadillac’s CUE, featured touch-sensitive volume sliders but were later swapped with manual knobs due to overwhelming customer feedback.

We also had a couple of screen freezes; once while playing Spotify and another while trying to change drive modes on the trail. On the highway drive, we also were unable to activate the R1T’s lane-centering feature, a glitch that a reboot in a parking lot by a Rivian employee still couldn’t correct.

We were given the standard disclaimer, however, that these were prototype vehicles, and a Rivian representative tells us that customers awaiting their examples already know there will be some growing pains. He assured us that the ability to collect data from customer vehicles, once they’re on the road, combined with the speed of over-the-air updates, will help any bugs to be promptly squashed.

Towing capacity for the R1T is rated at 11,000 pounds, and its payload capacity is claimed to be 1,760 pounds.  Photo by Elliot Ross, courtesy of Rivian Automotive LLC.

Rolling off the line now, the first to market will be the $73,000 Launch Edition, all of which have been spoken for. Other versions are expected to be delivered in early 2022. Each customer will be assigned a “Rivian guide” who will assist with everything from the buying process to service and support as long as the customer owns the truck.

Minor on-site service will be done by mobile technicians, while a pickup and delivery option will be offered for more extensive repairs. And a complimentary one-year membership includes unlimited charging on the Rivian network, off-road assistance and access to special events. In all, Rivian may have some further fine-tuning to make but, right now, the R1T is poised to be king of the hill.