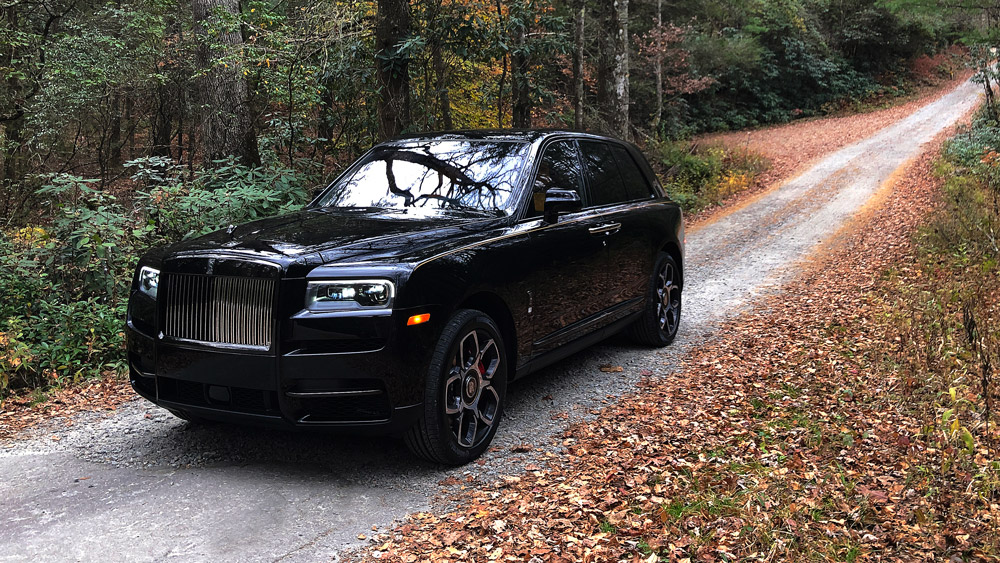 The Blue Ridge Parkway arcs through the Appalachians, dishing tantalizingly tight corners tempered by stately speed limits that never exceed 45 mph. Rolls-Royce’s standard Cullinan may seem well-suited to the bucolic route, but spoiler alert, it’s not—at least if you enjoy giving a Roller the old beans. Though she’s a honey on the straights, the big, wafty Cullinan becomes a bit of a handful on the curvy bits. But then 6,069 pounds of steel, leather and wood have a funny way of doing that.

The new Cullinan Black Badge counters the original Cullinan’s nautical tendencies, following in the footsteps of the sportier Black Badge Wraith and Ghost models. The changes are subtle, but perceptible. Cullinan’s massive 6.75-liter V-12 now produces an additional 29 hp (for a total of 600 hp) and 37 extra ft lbs of torque (bringing the net sum to 664 ft lbs). Both figures peak at an impressively mellow 1,600 rpm.

While the Wraith Black Badge debuted in 2016 and was introduced at a Las Vegas racetrack (with a night drive at speed, naturally), the blacked-out Cullinan’s coming out party took place on the aforementioned Parkway, offering an opportunity to push its dynamic capabilities along the sinuous ridges of the Great Smoky Mountains outside of Asheville, N.C.

Even the Spirit of Ecstasy hood ornament has been darkened to reflect the SUV’s edgier aesthetic.  Photo by Basem Wasef.

The Cullinan Black Badge’s finishes and details have been darkened to suit the more aggressive, youthful theme, while model-specific 22-inch wheels differentiate the saucier version from lesser models. Inside, a carbon-fiber veneer, dubbed Technical Carbon, adds a contemporary touch with 23 separate—but identical—3-D geometrical forms that have been mirror-polished using six coats of lacquer. The process requires 21 days of handiwork (and still might not be your cup of tea), but does offer a slightly subversive alternative to the usual dead trees treatment.

Press the Low button on the elegant transmission stalk, and Rolls-Royce’s famously buttery throttle response is slightly sharpened, as are shifts from the otherwise gooey eight-speed transmission. The gearbox works in conjunction with satellite-linked technology to anticipate bends in the road, ensuring that maximum grunt is delivered to all four wheels when summoned. Adding to the enhancement theme is a tighter suspension and a slightly throatier exhaust note that kicks in when the ironically named Low button is squeezed.

It won’t be confused with any of the track-worthy SUVs hailing from Germany, Italy or the US. But the hopped-up Cullinan does bring an element of refreshing responsiveness to the otherwise restrained proceedings, especially as evidenced by the yelps that emanated from the back seat when I tossed the beast through corners. This is not your daddy’s Rolls. Though the body feels a tad more controlled and the exhaust a bit more vocal than an off-the-rack Cullinan, there’s still more than enough plushness to keep it from feeling too edgy, suggesting that Rolls-Royce has made a valuable step towards spicing up its offerings even if there’s still plenty of room to go harder, sleeker and blacker.