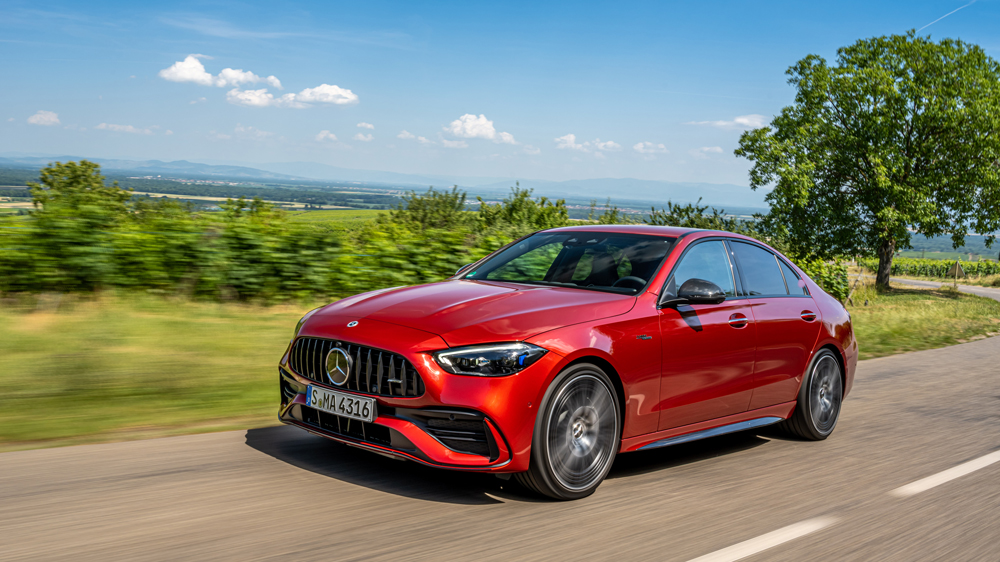 Mercedes-Benz raised the bar when it introduced its all-new C 300 sedan earlier this year, so it’s no surprise that its initial enthusiast-tuned follow-up act, the AMG-engineered C 43 sedan, elevates the C-Class to even loftier heights. A recent trip to Colmar, France, just miles from the Swiss border, allowed us an early opportunity to put the compact sports sedan through its paces before it arrives stateside at the end of the year.

All-new architecture allowed Mercedes-AMG, which recently debuted its all-electric Vision AMG concept car, to make a momentous change with this iteration of its C 43. Gone is the twin-turbocharged 3.0-liter V-6, but in its place is a new 2.0-liter inline-four power plant that combines an advanced combustion engine with an innovative electric turbocharger and a mild hybrid system. As a result, the model is more potent than its predecessor, and its technical innovation is cutting-edge.

Mercedes-AMG engineers started with a gasoline-fed, turbocharged 2.0-liter inline-four engine—internally designated the M139L—and mounted it longitudinally under the hood. (The last time Mercedes offered a four-cylinder mounted “north-south” was in the early 1990s.) The all-aluminum engine, with combined port and direct fuel injection, follows Mercedes’ “One Man, One Engine” principle, meaning each one is hand-assembled in Affalterbach, Germany, and finished with a signed plaque.

Intake boost is supplied by a pioneering electric exhaust-gas turbocharger mimicking the automaker’s current Formula 1 technology. The compact turbocharger utilizes a thin 48-volt, liquid-cooled electric motor sandwiched between the turbine wheel and compressor wheel. When boost is requested, the electric motor instantly spins the common shaft to 100,000 rpm—preceding the arrival of exhaust gas—where it provides near-immediate boost with negligible lag. The exhaust gasses supplement shortly thereafter to increase the turbocharger’s speed to 175,000 rpm.

Due to the two-stage injection, a sophisticated cooling system—with multiple thermal zones—and the advanced electric turbocharger, the state-of-the-art engine is rated at 402 hp and 369 ft lbs of torque (the outgoing V-6 model made 385 hp). That specific output of more than 200 hp per liter allows Mercedes to tout the mill as the world’s most powerful four-cylinder engine in a standard production vehicle.

Yet there’s even more power under the hood. Augmenting the engine is a mild hybrid system with a 48-volt integrated starter-generator. Depending on the situation, the motor supplies an additional 13 hp to the mix and ensures that the engine’s fuel-saving start/stop program is nearly seamless to the occupants.

Power is transmitted through an AMG Speedshift MCT 9G transmission, which is marketing-speak for a multi-clutch nine-speed automatic gearbox that uses a wet start-off clutch in place of a traditional torque converter (its advantages include lower mass, quicker response and lightning-fast multiple downshifts). Permanent all-wheel drive, provided by an AMG Performance 4MATIC, is standard. While most variants of 4MATIC offer variable torque distribution, the engineers at AMG set the C 43’s torque split at a fixed 31 percent front and 69 percent rear. The benefits include a rear-biased feel and improved traction while accelerating.

A distinctive rear diffuser, subtle decklid spoiler and quad round tailpipes considerably enhance the exterior of the model.  Mercedes-Benz AG

In terms of underpinnings, the C 43 is fitted with Mercedes’ AMG Ride Control suspension with its Adaptive Damping System as standard equipment. From the left seat, tuning the C 43’s driving dynamics is effortless with the five AMG Dynamic Select programs (Slippery, Comfort, Sport, Sport+ and Individual) that tailor engine responsiveness, transmission-shift speed, steering weight, electronic stability control (ESP) intervention and suspension firmness. Individual mode is distinctive because AMG allows customization of the ESP system—those who choose to push the limits of physics may configure ESP to allow high drift angles or defeat ESP altogether. In addition, rear-axle steering, allowing up to 2.5 degrees of steering angle, is standard on all C 43 models to enhance stability and turn-in.

As expected, the AMG-tuned sedan is fitted with an upgraded brake and wheel/tire package. The rotors are more robust, with four-piston calipers in the front and single-piston units in the rear (both painted silver). Standard are the 18-inch AMG light-alloy wheels, but most buyers will likely go for the larger 19- or 20-inch optional alloys. Our test vehicle wore Michelin Pilot Sport 4S tires (265/30-20) at all four corners, which is an exceptional choice in factory rubber.

The sport sedan boasts a more aggressive sound thanks to a variable exhaust-gas flap that tunes the audio level based on the selected drive mode. Whereas the current trend is to tune exhaust systems with over-the-top burbles, pops and cackles, the C 43’s exhaust is restrained with a pleasant, understated growl that never sounds obnoxious. Nevertheless, those seeking a bit more rock-and-roll for their ears should opt for the AMG Real Performance Sound that amplifies the exhaust note and feeds it into the passenger cabin for a “particularly emotive sound experience,” according to the automaker.

The standard C 300 sedan, a handsome four-door with gorgeous lines and appealing proportions, is visually much sportier than its predecessor. Nevertheless, the team at AMG improved upon an already good thing with the C 43—its AMG-specific vertical grille, aggressive bumpers, distinctive rear diffuser, subtle decklid spoiler and quad round tailpipes considerably enhance the exterior with a bold motif.

Following the same trend, the interior is offered with AMG sports seats—some of the most comfortable we’ve ever experienced—paired with red seat belts. In addition, there’s a perforated Nappa-leather flat-bottom steering wheel (configured with two round AMG dials), AMG pedals, AMG floor mats and a full complement of premium upholstery upgrades; the contrasting colors and stitching are eye-catching.

The AMG sports seats were among the most comfortable we’ve ever experienced.  Mercedes-Benz AG

Mash the throttle from a dead stop, and the C 43 jumps off the line quickly (the electric exhaust-gas turbocharger unquestionably reduces lag) and pulls strongly through each of its gears. The launch is drama-free and without a hint of wheelspin, thanks to all-wheel-drive traction and the grippy Michelin tires. Mercedes-AMG claims the 3,900-pound sedan will bolt from zero to 60 mph in 4.6 seconds, but that may be slightly conservative based on our seat-of-the-pants assessment—it feels quick. The top speed, with the optional 19- or 20-inch wheels, is 165 mph.

Most drivers (and passengers) will be hard-pressed to tell that there’s a four-cylinder under the hood considering the power and its delivery; the C 43 pulls well when prodded to perform. Driving through the rolling hills along France’s Alsace Wine Route, the electric turbo technology proves impeccably integrated. Passing slow trucks is effortless, especially if the steering wheel–mounted paddle shifters are used to drop a gear or two before executing the maneuver. And while pushing the sport sedan hard in the higher elevations of the Vosges Mountains, where the Mercedes grips each corner with claw-like tenacity, the innovative turbo is nearly transparent—the engine demonstrating faultless responsiveness.

The AMG Speedshift is buttery smooth in regular automatic operation (almost too leisurely for all but the most sedate driving styles). However, Mercedes-AMG has calibrated Sport and Sport+ modes to deliver a more exhilarating feel, with more perceptible shifts. Of the five modes, Sport offers the best balance for those who want to relish the driving experience—the C 43 feels alive and peppy without the sensation of being over-caffeinated.

This is an exemplary luxury sport sedan with considerable athletic abilities. It doesn’t cover all the bases, as those seeking track-honed performance and neck-snapping acceleration need to hold out for the upcoming C 63. Yet we’re confident that the all-new 2023 Mercedes-AMG C 43 will more than fit the needs of most driving enthusiasts.