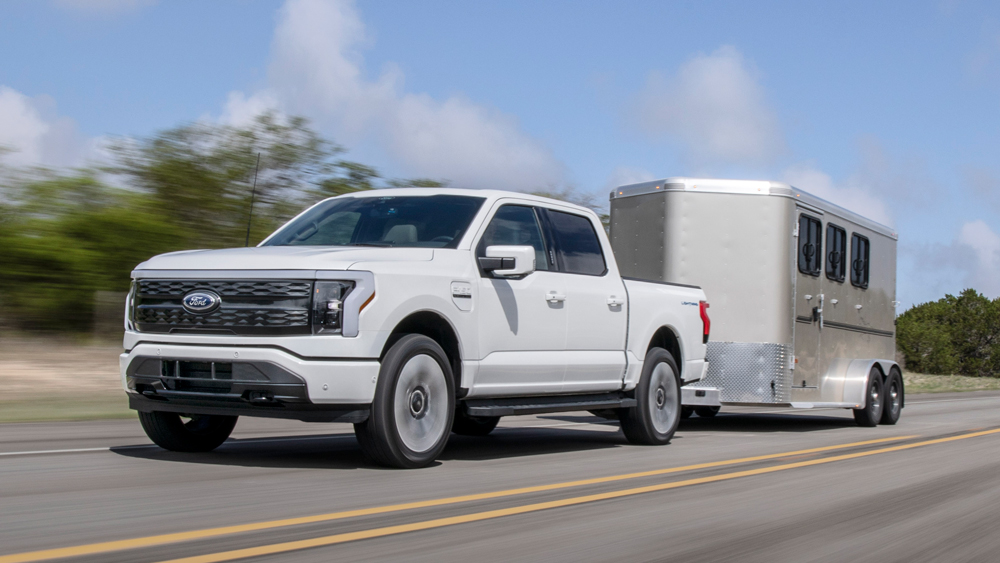 Ford is taking electrification to the next level with the F-150 Lightning, blending reliable pickup truck features with future-forward technology. Powered by an electric motor on each axle, the all-wheel-drive F-150 Lightning achieves a range of up to 230 miles with the standard battery pack, or 320 miles with the extended-range battery.

For truck owners, the draw for a battery-electric pickup isn’t so much about saving the planet as it is pushing the limits of power and capability, although zero tailpipe emissions and the potential cost savings when gas prices are more than $6 a gallon is nothing to ignore. The F-150 Lightning makes 452 hp with the standard battery pack and 580 hp with the extended-range battery, along with 775 ft lbs of torque. Such figures may not be nearly as impressive as those of the new 1,000 hp GMC Hummer EV, but they are enough to tow up to 10,000 pounds and carry a maximum payload of more than 2,200 pounds. Only one configuration is offered: a five-seat “SuperCrew” cab with a 5.5-foot bed. But as a bonus, the electric architecture allows for a front trunk that can fit extra gear weighing up to 400 pounds.

On a test-drive in San Antonio, Tex., we found the top-of-the line Platinum version to be quiet and comfortable, even on its standard 22-inch aluminum wheels. From highway cruising to towing a three-horse trailer (with weights instead of horses), the F-150 proved every bit as capable as its gasoline-powered counterpart—if not more so—with the instant torque from the electric motor and near 50-50 weight distribution. A lower center of gravity, thanks to the skateboard platform and a new independent rear suspension, help the truck feel even more planted. Advanced driver-assist systems include Blue Cruise with automated lane centering and steering capability, which allows for completely hands-free driving on certain pre-mapped roads. Maneuvering in tight spaces with the truck isn’t easy, however, and we’d like to see Ford offer rear-wheel steering on the F-150—a feature that transforms the Hummer EV from potentially clumsy to surprisingly agile.

A lower center of gravity, thanks to the skateboard platform and a new independent rear suspension, help the truck feel even more planted.  Ford Motor Company

On an off-road course, the F-150 Lightning climbed rocks and traversed ruts admirably, and its electronic locking rear differential helped to pull the truck out of most sticky situations. But this isn’t the model’s strongest suit, and those looking specifically for outdoor adventure should look to the Hummer EV or Rivian R1T.

The F-150 Lightning’s user interface is shared with the Mustang Mach E, with some additional features specifically for the truck, including a towing application that allows users to enter the dimensions and weights of their trailers for a more accurate range estimate. Ford’s large, portrait-oriented display appears slightly more integrated into the instrument panel than the Mach-E’s screen. Yet despite its good visibility, it’s still a less-than-elegant solution.

On an off-road course, the truck climbed rocks and traversed ruts admirably, but this isn’t its strongest suit.  Ford Motor Company

What will be particularly compelling to many truck owners—especially in Texas, where residents swapped power-outage tales—is the F-150 Lightning’s Pro Power onboard capability, which essentially turns extended-range-battery models into generators that can power a home or small office for up to three days. This, however, requires installation of a $3,895 inverter.

As with the gasoline-dependent model, Ford expects the bulk of F-150 Lightning sales to be in the commercial sector. Earlier this year, we saw firsthand how the F-150 Lightning and other commercial EVs are revolutionizing businesses of all sizes. In Sonoma, Calif., for example, employees at wineries that installed charging stations on their property no longer have to drive out to fuel up during the working day. Vintners told us that the lack of tailpipe emissions will greatly reduce the risk of tailpipe pollution settling on the grapes, resulting in cleaner, purer wine. Francis Ford Coppola, who owns renowned Inglenook estate in Napa Valley, has moved his fermentations underground beneath the vineyards, which frees up precious room above, thanks to electric service vehicles that can safely operate in closed spaces.

Ford says it plans to produce 150,000 examples of the F-150 Lightning next year, and all current-year models are now sold out. Of course, the company faces the same challenges that now stymie the entire auto industry, including microchip shortages and supply-chain woes, as well as inadequate electric infrastructure in many parts of the country. But after time behind the wheel, it’s clear that the F-150 Lightning is an extremely capable pickup that will convert EV skeptics and help take a legacy nameplate into the future.

Click here to see all the photos from our first drive of the Ford F-150 Lightning.