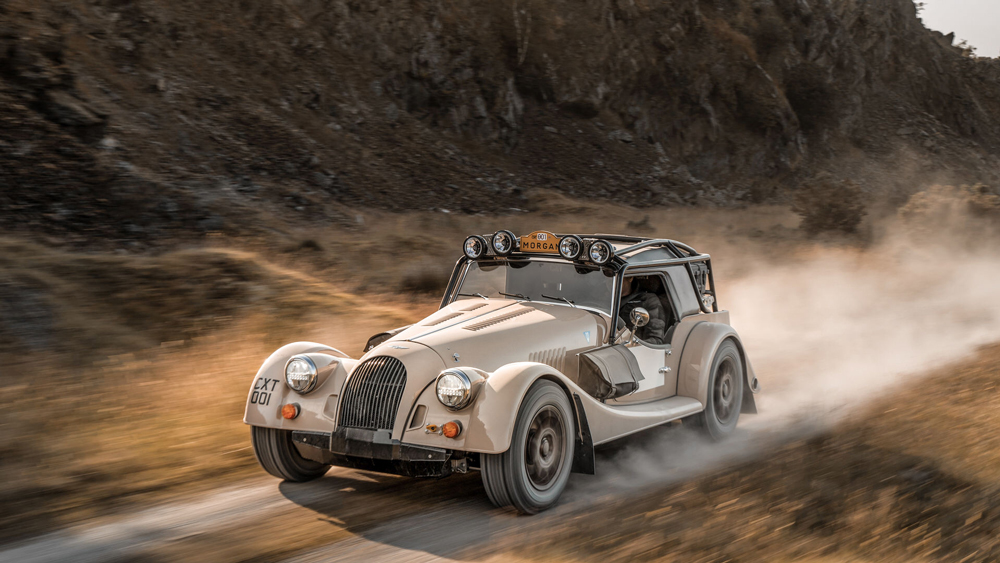 As the fast-moving plume of dust approaches, I make out the familiar frog-eye headlights, flowing fenders and long, louvered hood. But what’s this? All-terrain tires, a beefy external roll cage and a rack laden with spare wheels and survival kit? This monstrous Morgan looks to be from beyond Thunderdome and should have Mad Max himself behind the wheel.

Coming into sharp focus, the car flings up mud and gravel as it slews sideways, its tailpipe letting forth a volley of air-splitting pops. I take an involuntary step backwards. Then it stops: the Morgan Plus Four CX-T coasts to a gentle halt and its driver jumps out. “Your turn,” he says with a grin.

A bit of off-road exploration in the Morgan Plus Four CX-T.  Photo: Courtesy of Morgan Motor Company.

The idea of an overland vehicle from England’s Morgan Motor Company is less outlandish than it might seem. From the 1920s onward, the automaker’s now classic 4/4 and three-wheeler models were regular competitors in off-road durability trials, relying on simplicity and skinny tires to travel where most of today’s SUVs would fear to tread. It was these hardy pioneers and their exploits that inspired the Plus Four CX-T.

The project began with nothing more than a playful sketch. “One of our investors walked into the office, saw the drawing and immediately decided we should build it,” explains Jonathan Wells, head of design at Morgan. “We imagined what a modern off-road Morgan would look like.”

A daring duo take one of the Plus Four CX-T’s predecessors through the backcountry in a bygone era.  Photo: Courtesy of Morgan Motor Company.

The result is somewhere between an Ariel Nomad and what Singer developed as the ACS: a road-legal roadster that can explore far beyond the beaten track. Just seven customer cars will be built, each priced at $233,000 plus taxes. This includes an invite to an exclusive CX-T driving event in Morocco that had been postponed due to the pandemic, but is now scheduled for this year.

To be clear, the Morgan isn’t an FIA-homologated competition car. Wells describes it as “an experiential off-road adventure vehicle.” Nonetheless, many of the parts that transformed his sketch into reality—from the shock absorbers to the wiring loom—are motorsport grade and sourced by Rally Raid UK, a team specializing in desert racing. It’s at Rally Raid UK where the man in charge, known as Beady and a veteran of 30 Dakar rallies, talks me around the car.

“The four-cylinder BMW engine, six-speed manual gearbox and aluminum ‘CX’ chassis are the same as a stock Plus Four,” he explains, “but every panel except the nose cone is new. Even so, we wanted it to look like a Morgan, not a monster truck.” The huge military-spec air filter, for instance, is hidden in one of the side-mounted leather saddle bags. The other contains a tow rope.

The 2,800 pound Morgan is fit with a 259 hp, four-cylinder BMW engine paired with a six-speed manual gearbox.  Photo: Courtesy of Morgan Motor Company.

Behind its two-seat cabin, the CX-T is loaded with a fuel can, wheel brace, tool boxes, traction mats and the all-important spade. “We have a one-layer-deep approach,” notes Beady, “meaning everything must be easily to-hand. Otherwise you simply lose stuff or cut corners. And if things can go wrong in the desert, they will.” Wells says CX-T buyers have also customized their cars with mountain-bike racks, kangaroo bars and even attachment points for being craned onto a yacht.

I set off on a muddy, rutted route that replicates the trials courses used by the CX-T’s ancestors (and still popular in the UK today). It’s the sort of technical track that a Land Rover Defender could plod along quite happily, but the rear-driven Morgan needs a bit more gas to maintain momentum. Driving a sports car over steep drop-offs and through deep ditches feels bizarre at first, and I can’t help laughing at the madness of it all.

Behind the two-seat cabin, off-road accoutrements include a fuel can, wheel brace, tool boxes, traction mats and the all-important spade.  Photo: Courtesy of Morgan Motor Company.

However, there’s a sense of toughness about the CX-T that attests to Beady’s ingenuity and many late nights. Its 9.1 inches of ground clearance aren’t enough to prevent spine-jarring contact with a few rocks, but the full-length undertray—which also covers the relocated side-exit exhaust—shrugs them off. The car’s approach and departure angles are also genuinely impressive. Plus, as Wells points out: “If you do dent the aluminum fenders, you can just bend them back into shape.”

After a few laps, it’s time for some high-speed action on the gravel course used by Silverstone Rally School. With 259 hp and around 2,800 pounds to shift, the Morgan feels surprisingly quick (the regular Plus Four hits 62 mph in 5.2 seconds). The sensation of speed is heightened by an outstretched driving position, shallow windshield and low-cut doors. “You can remove the doors and bolt them to the roof,” says Beady. “You’ll get dusty either way, though.”

Experiencing the Morgan Plus Four CX-T, automotive journalist Tim Pitt wears an expression that says it all.  Photo by Nick Dimbleby, courtesy of Morgan Motor Company.

Again, it feels incongruous on such rough roads, but the long-travel Exe-TC suspension feels smoother the faster you go. Staying mostly in second gear, I soon gain confidence, aiming the long nose at each apex, then controlling the car’s angle with the throttle. Despite the extra weight over the rear wheels, the car feels balanced and supremely tough while proving to be outrageously good fun to pilot. The thought of driving a Morgan across the Moroccan dunes suddenly seems quite plausible.

The Plus Four CX-T has already sold out, however, so hope of that adventure will have to remain a dream for me. But we can expect to see more special projects from Morgan in the future. Whatever they are, they definitely won’t be dull.