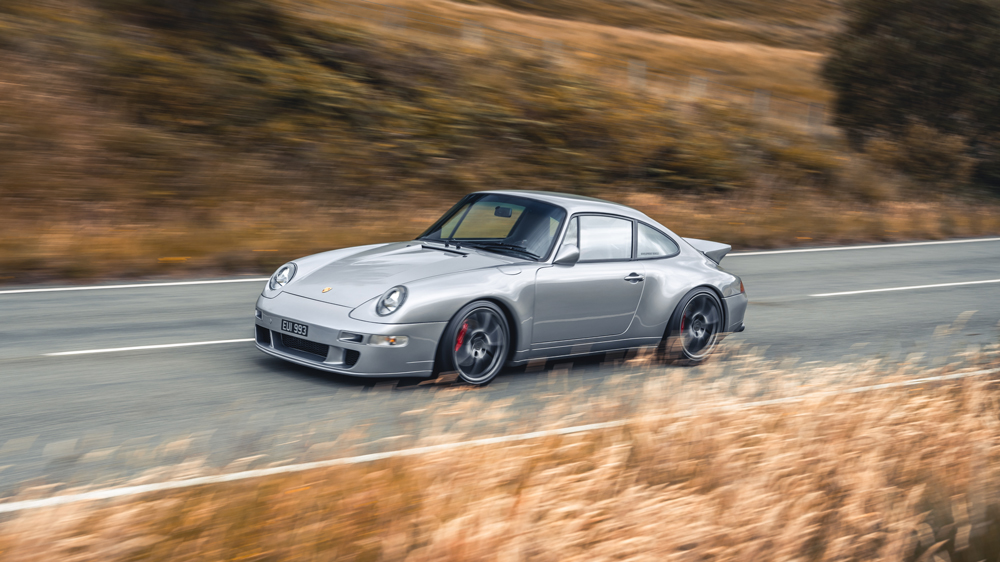 Many Porsche restomods follow the same formula: start with a 964 or big-bumper G Series 911, then “backdate” it to look like an early 1970s 911S or 2.7 RS. Broadly speaking, that’s the approach the Paul Stephens restoration house has taken with its bespoke AutoArt cars since 2002. Now, however, the UK specialist has changed direction with a restomod that rejects nostalgia and sees the classic 911 through a contemporary lens. Meet the 993R.

Based on the final evolution of the air-cooled Porsche 911 (made from 1994 through 1998), the 993R goes back to the future with a range of upgrades from later, water-cooled GT models. Paul Stephens explains that the brief was to “take a Carrera and uplift everything by 25 percent.” Inspiration came from the “less is more” ethos of the cult-classic 911R, both the 1967 original and its 2016 sequel.

Despite having more power (330 hp) and less weight (2,690 pounds with fluids), the 993R is resolutely focused for the street. On narrow UK roads in particular, that means slim hips are best, so each build will start with a Carrera 2, rather than the Carrera 4 with its wider haunches. Incidentally, both cars still have a smaller footprint than today’s 718 Cayman.

Taken back to bare metal, the 911’s shell is seam-welded for strength and its rain gutters are removed to improve aerodynamics (a trick Porsche used on the 959 supercar, aiding towards its 197 mph top speed). The fiberglass front and rear bumpers are made in-house and weigh just 20 pounds each, while the elongated rear spoiler has ram-air vents like a 996 GT3. And Porsche Motorsport’s thinner glass helps save a few pounds, too.

Despite having racy specs like 330 hp while weighing only 2,690 pounds (with fluids), the 993R has been resolutely focused for the road.  Courtesy of Paul Stephens.

The 993R’s adjustable suspension is also sourced from the racing department in Weissach, and combines with Tractive Ace adaptive dampers (also standard equipment for Ruf and Pagani). Stephens didn’t want a glaring touchscreen bolted to the 993R’s dashboard, so a simple twist-knob offers five preset levels of ride stiffness. In a rare case of newer wheels looking right on an older car, the 18-inch rims come from a 996 GT3 RS. Wrapped in Michelin Pilot Sport tires, they cover the stronger “Big Red” brakes of the 993 Carrera RS.

Lift the lid of a regular 993 and its 3.6-liter flat-six is barely visible beneath a muddle of ugly black plastic. The “R” revision from Stephens, by contrast, has an exquisite engine bay worthy of a show car. The view is now dominated by a polished 996 GT3 plenum, individual throttle bodies and a 993R-branded shroud for the fan, while the air-con system (now electric) has moved to the front trunk to improve weight distribution.

Wrapped in Michelin Pilot Sport tires, the 18-inch rims come from the 996 GT3 and cover brakes from the 993 Carrera RS.  Courtesy of Paul Stephens.

Expanded to 3.8 liters, the engine also uses 993 RSR pistons, custom camshafts, Pauter lightweight conrods, solid Porsche Motorsport lifters and a 997 GT3 crankshaft and oil pump. Peak power arrives at 7,400 rpm, with the limiter likely to be fixed just beyond 8,000 rpm. “It’s an engine that was designed to rev,” explains Stephens. “Turbocharging or supercharging was never an option. You need to work for the power and feel it build.”

Inside, the 993R is simple but beautifully effective. Most of the panels have been reconstructed from fiberglass to ensure a flawless fit, then retrimmed in soft Italian leather. Formerly plastic parts such as the column stalks and heater controls (even the ignition key) are replaced by cool-to-the touch aluminum. There’s a USB for charging your phone, but no infotainment—though it’s an option, according to Stephens. So too is a “Touring” specification, with rear seats rather than the half roll cage filling the back.

The 3.8-liter flat-six features a polished 996 GT3 plenum, individual throttle bodies and a 993R-branded shroud for the fan.  Courtesy of Paul Stephens.

The air-cooled engine sounds angry and insistent at idle, its single-mass flywheel rattling like a race car. It soon settles down on the move, though, with 2022-spec sound deadening to muffle the commotion. Only when you get beyond 5,000 rpm does the 993R begin to truly sing: a hard-edged, visceral howl that feels as physical as it is acoustic. Infotainment? Who needs it?

Paul Stephens will offer a 360 hp version of this engine, along with a 4.0-liter unit that could top 400 hp. For the road, however, in a car that weighs 331 pounds less than a stock 993 Carrera 2, you really don’t need more. The 993R is hugely tractable, without the low-speed stutter or shunt that afflicts some tuned flat-sixes, and its notchy six-speed manual gearbox is a joy to use. The throttle even has a special tab to help you heel-and-toe. And as for a zero-to-60 mph time, 4.5 seconds is what can be expected, plus a top speed north of 170 mph.

For the interior, most of the panels have been reconstructed from fiberglass then retrimmed in soft Italian leather.  Courtesy of Paul Stephens.

The 993R is still unmistakably a 911 to drive. There are quirks, such as the floor-hinged pedals, the upright windshield and the steering wheel that obscures half the dials. But more fundamentally, there’s the sense of weight transfer, of throttle-adjustable balance and the wonderful tactility through the Momo wheel. English country lanes are a notoriously tough test, yet with the shocks on their second-softest setting, the car didn’t bump or thump once. “We wanted it to be daily drivable,” says Stephens. Mission accomplished.

The elongated rear spoiler has ram-air vents like a 996 GT3.  Courtesy of Paul Stephens.

In truth, I can’t think of many cars I’d rather drive every day. The 993R delivers a brilliant blend of old-school thrills with just enough modern luxury and civility. If Porsche had built a 993 GT3, I suspect it would have looked something like this. A starting price of around $480,000 (plus a donor car) pushes the cost of a Paul Stephens restomod into the realm of serious supercars. And like the latter, with only a handful likely to be built each year, it will remain a rare and special sight.

Click here to see all the photos of the Paul Stephens 993R Restomod.

The Paul Stephens 993R restomod based on the Porsche 993.