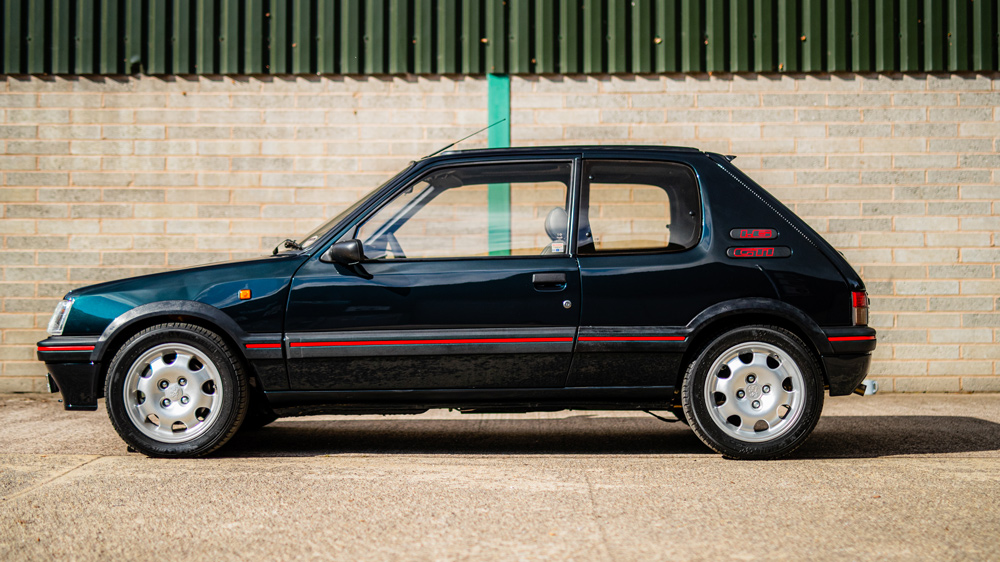 Photo by Will Broadhead, courtesy of Tolman Motorsport Ltd.

The hot hatch, aka high-performance hatchback, is a religion in the UK, and the Peugeot 205 GTI has sacred status. The original Volkswagen Golf GTI set the template in the 1970s, making British sports cars like the MGB and TR7 look instantly irrelevant, but the Peugeot 205 propelled the hot hatch to new heights. When CAR magazine pitched one against a Lotus Esprit Turbo in 1988, driving both cars 5,000 miles in a week, the plucky Peugeot came out on top.

As time passed and prices fell, many GTIs were thrashed and crashed. The survivors are now sought-after classics, and ripe for the restomod treatment. That’s where Tolman Motorsport comes in. As with many of us devotees, company founder Chris Tolman has rose-tinted memories of owning and driving 205 GTIs. “This car performs how we remember them,” he promises, “not how they really were.”

Tolman began his career testing aircraft for the UK’s Ministry of Defence, but motorsport was his passion. He joined automotive specialist Prodrive in 1999, working on the Ford Mondeo Super Tourer, then moved to Ralliart and the all-conquering Mitsubishi Lancer Evo. “I spent seven glorious years traveling the world as a rally mechanic. It was everything I’d dreamed of as a boy.”

In 2007, Tolman decided to branch out further, running a factory race team for Ginetta and the GT4 driver development program for McLaren, among other endeavors. “I treat cars like airplanes,” he notes. “Everything is logged and reported to ensure reliability.”

When it came to applying this racing expertise to a road car, Tolman felt his beloved 205 seemed the obvious place to start. Yet the GTI Tolman Edition is no stripped-out track warrior. Instead, it’s a remarkably subtle kind of restomod, with reversible, OEM-style upgrades that build upon the car’s strengths without diluting its character. Park it next to a stock version and you’ll struggle to spot the difference.

The Tolman Edition is equipped with reversible, OEM-style upgrades.  Photo by Will Broadhead, courtesy of Tolman Motorsport Ltd.

Helpfully, a stock 205 is exactly what I have at hand to compare it with. Nick Bailey’s immaculate, 67,000-mile 1.6 GTI is here to jog my memory, and provide a reference point for the reworked car. First, though, a walk around the Tolman Edition reveals that its petite, pretty lines might be almost identical—even the stainless-steel exhaust has the same modestly downturned tailpipe—but much is modified under the skin.

For starters, the Tolman Edition’s body shell has been sand-blasted and resprayed from bare metal, with every nut or bolt plated and powder coated. The 1.6-liter engine was also rebuilt, using a skimmed head, a polished and balanced crankshaft, a lightweight flywheel, an ITG air filter and a Motec ECU. Power climbs from 115 hp to 130 hp, which is good for covering zero to 60 mph in around 7.5 seconds.

The body shell has been sand-blasted and resprayed from bare metal, with every nut or bolt plated and powder coated.  Photo: Courtesy of Tolman Motorsport Ltd.

Itching to get behind the wheel of a GTI again, I start with the original. The flimsy door clangs shut and its cloth-trimmed cabin looks brutally basic by 2021 standards. But its seats are supportive, the pedals perfectly placed and visibility feels panoramic. As the peppy, naturally aspirated engine bursts into life, I can’t suppress a smile.

Indeed, if Tolman’s aim of providing an original 205 was to show up its shortcomings, it hasn’t worked. This 20-year-old “pocket rocket” still buzzes with youthful, effervescent energy. Its three-spoke steering wheel jostles with non-stop feedback and the chassis feels up on its toes, loose-limbed yet unerringly accurate.

It isn’t perfect, of course. The unassisted steering is heavy around second-gear turns, the brakes require some forward-planning and crash safety is, well, sub-optimal. But the diminutive 205 GTI still feels tailor-made for driving fun. It’s more agile and communicative than any contemporary rival, and makes today’s hot hatchbacks seem morbidly obese.

Rebuilt to offer 130 hp, the tuned 1.6-liter engine is notably punchier in the mid-range.  Photo by Will Broadhead, courtesy of Tolman Motorsport Ltd.

What the Tolman Edition adds is an extra layer of competence and driver confidence. It turns in more aggressively, grips harder and feels more planted, all without sacrificing ride comfort or the option for lift-off oversteer—one of the 205’s most famous (and infamous) party tricks. The power steering is helpful but not intrusive, and the Alcantara-wrapped steering wheel is a tactile, motorsport-inspired touch.

The tuned engine is also keener to rev and notably punchier in the mid-range—rolling road tests show 60 hp at 3,500 rpm, up from 50 hp as standard—while the stronger brakes keep my enthusiasm in check. Then there’s Tolman’s unique Sport mode, which alters the ignition timing for sharper throttle response, plus a volley of metallic “pop-pops” on the overrun. My younger, GTI-driving self would never have turned it off. The standard 205 didn’t disappoint, but Tolman’s is even better. More practical than any sports car, it imparts just as much joy on the road.

This development 1.6 GTI is for sale at $62,000, then Tolman plans a run of between five and 10 more examples, likely based on the later, more powerful 1.9 GTI, which will start at $70,000. As a means to discover one of Europe’s best-loved cars, a modern classic that the US was, sadly, denied, that price point is still quite a bargain in my book.