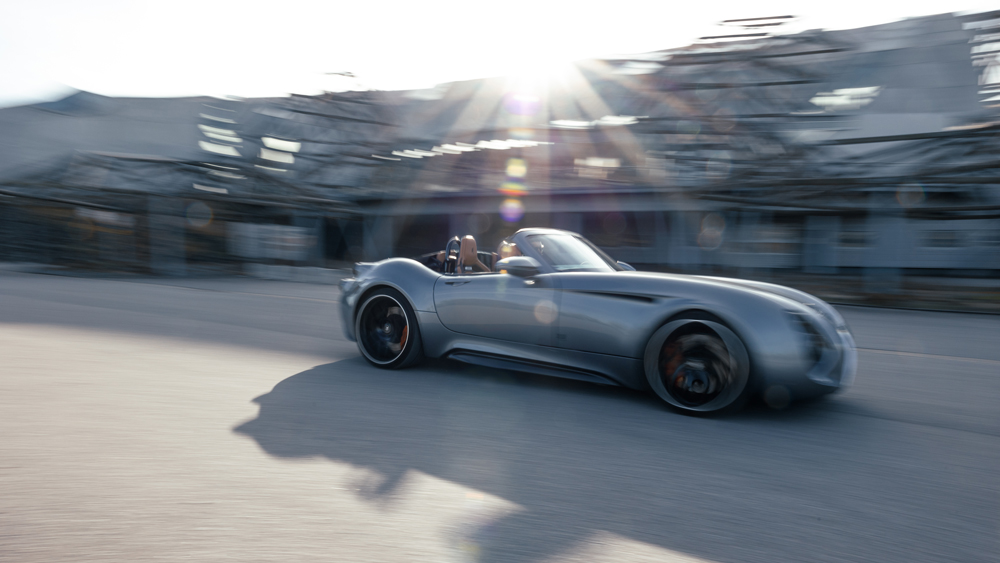 It’s ironic that Tesla started out with an electric sports car—the 2008 Roadster—because nobody has seemed to offer one as a production model since. Yes, we’ve seen a few electric hypercars with seven-figure price tags, and one-off restomods, but nothing as far a production sports car that can double as a daily-driver.

There are good reasons for this. EVs are invariably heavy, which doesn’t suit a sports car. Their drivetrains can also be short on drama, with no gears to shift and totally linear response. And the whirr of electric motors doesn’t assail your ears like the cacophony of combustion.

German marque Wiesmann has cherry-picked some of BMW’s most exciting engines in the past, including the straight-six from the BMW E46 M3 (circa 2000 through 2006) and the Formula 1–inspired V-10 from the E60 M5 (2004 through 2010). Now, Wiesmann hopes to inject the same emotional appeal into an electric sports car. Meet Project Thunderball.

Wiesmann’s CEO Roheen Berry greets me outside the marque’s distinctive “Gecko Factory” near Düsseldorf, Germany. “I’d never heard of Wiesmann until my brother bought one,” says Berry, “but I was instantly intrigued.” The British-born, Harvard-educated entrepreneur looked into buying distribution rights for the UK and other right-hand-drive markets, but ended up buying the company. “That was in 2016—my hair has gotten a lot grayer since,” he says.

Having rescued Wiesmann from bankruptcy, Berry embarked on a mission to bring the brand to other markets throughout the world, including stateside. “We’ve been around for decades, but 90 percent of our cars were sold in Germany, so we never gained international recognition,” says Berry. Project Thunderball will spearhead that growth, followed by a second sports car (also likely to be electric) and “maybe even an SUV,” according to Berry. The eventual plan is to build between 500 and 600 vehicles per year.

This time, rather than sourcing components from BMW, Wiesmann has partnered with technology firm Roding, which has worked on vehicles as diverse as Olympic bobsleds and the Mars Rover. Project Thunderball’s 92 kwh battery pack is thus unique to Wiesmann, and is housed under the huge front clamshell—rather than within a skateboard-style platform—to make it easier for owners to upgrade at a later date.

Wiesmann’s new two-seater features a chassis that’s aluminum clad in carbon fiber (previous cars were fiberglass), and it wears an electric soft-top that retracts in nine seconds. A curvaceous coupe is also in the product plan and will be revealed next year. As for the Bond-esque ‘Project Thunderball’ name, it was coined by the development team and may change before the car reaches showrooms in early 2024. “We’ll see if it sticks,” says Berry with a smile.

Before jumping into the EV roadster, I’m offered a chance to drive two of Wiesmann’s “heritage” models. First up is the CEO’s own GT MF5, which looks like a mutated Shelby Daytona Coupe and borrows its 555 hp, 4.4-liter twin-turbo V-8 from a BMW X5 M. The ergonomics are haphazard and the automatic gearbox isn’t super-sharp, but the Wiesmann is full of roguish charm. As it’s Halfway between an eccentric grand tourer and an over-engined muscle car, it’s hard not to love it.

I then swap into an MF4-S roadster, powered by the 420 hp V-8 from a BMW E90 M3 (2007 through 2013). With a dual-clutch M-DCT transmission, it instantly feels more alert, its naturally aspirated engine revving to 8,400 rpm with a searing metallic howl. Presenting a more straightforward and immersive driving experience than the GT MF5, it makes a compelling case for old-school piston power. Can an EV really follow this?

It will have to, but while there is revolution under the surface, Project Thunderball’s styling is rooted in the past. Its fulsome curves draw upon classic British sports cars like the Austin-Healey 100 and Jaguar XK120, while its egg-shaped grille and insectoid lights are distinctively Wiesmann. With “eye sockets” in unpainted carbon fiber, it has a slightly menacing presence—particularly when looming large in your rearview mirror.

Project Thunderball’s spacious and sumptuously trimmed cabin also mixes retro and modern, combining hand-stitched leather and analogue dials with exposed carbon weave, a digital driver display and a central touchscreen. And if you don’t like how it looks, each vehicle can be customized to your taste, explains Berry, showing me two very different specifications on the Wiesmann configurator: one inspired by yachts, the other a road-racer. “This car can be Bruce Wayne or Batman,” he says.

I’m driving a 580 hp prototype that tips the scales at 4,200 pounds, which is 100 hp less and 450 pounds more than what is promised for the production version. In other regards, though, this is very much the finished article, with deep paint, perfect panel gaps and a build quality best described as “Germanic”.

Pulling away in fuss-free silence seems odd after the fanfare of the BMW engines, but the mighty torque from the twin axial-flux motors is immediately apparent. Where that glorious M3 V-8 has to be wrung out to give its best, the electric drivetrain feels effortless and omnipotent, like a coiled spring always ready to ping open. It’s the difference between a five-course meal and an all-you-can-eat buffet: a more cerebral sense of delayed gratification versus the sugar-rush of an instant reward.

Even in this specification, Project Thunderball feels brutally quick. It also slows down very effectively, with five levels of regeneration available via the paddles behind the steering wheel. You can use these to simulate engine braking through the gears when approaching a corner, or simply select maximum regen to drive with one pedal around town.

How about handling? Well, Wiesmann has a gecko logo (and a gigantic wooden gecko atop its factory) because its cars “stick to the road like geckos to a wall” says Berry. That’s true of Project Thunderball, which feels taut and tied-down, with ample grip from its broad-shouldered Michelin Pilot Sport 4S tires. The tradeoff is firm suspension, perhaps necessary to keep all that weight under control, and a rather abrupt ride, which seems at odds with the car’s long-striding GT character.

Other areas for fine-tuning before 2024 include the overly light steering (both the heritage cars had more heft) and the soundtrack: presently the unfiltered, high-pitched whine of the electric motors. The production car will have more sound deadening, plus some degree of artificial noise pumped through the speakers. I’m told it will sound “authentic,” although it’s unlikely to be as evocative as a high-revving V-8.

Making direct comparisons between electric power trains and those that are gasoline dependent might be missing the point, though. With a projected price tag of $310,000, the Project Thunderball could conceivably share garage space with a more traditional roadster, rather than replacing it. Alternatively, it might appeal fundamentally because of being electric, especially to somebody who wants to cut their carbon footprint, or drive a more socially acceptable sports car.

Tesla might have got here 14 years ago, but Wiesmann’s take is a far more sophisticated affair. With another year of development under its wheels, Project Thunderball should offer a very compelling middle ground between a luxury GT and a supercar. And despite what Elon Musk says, we’re pretty sure it will be ready before the “new” Tesla Roadster sees the light of day.