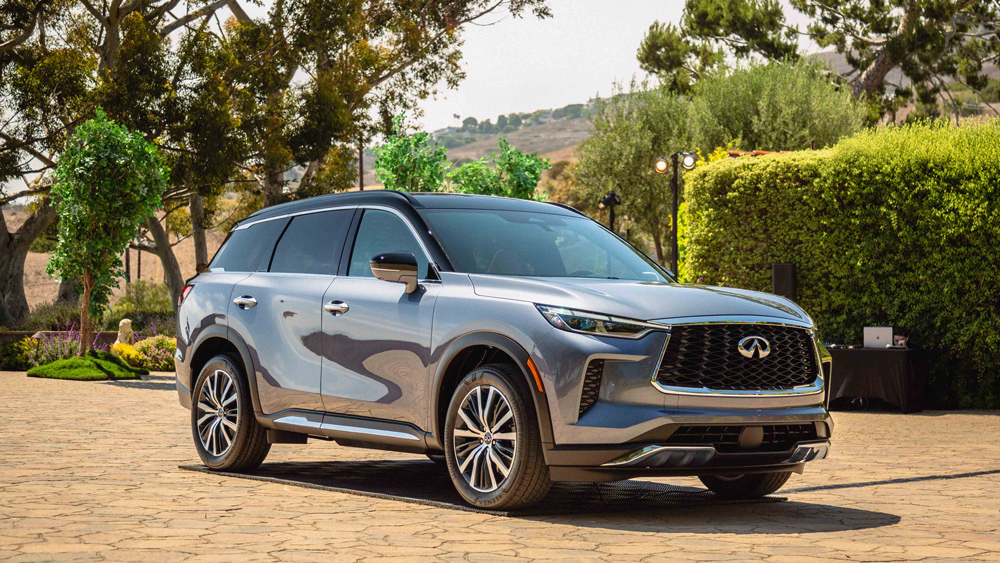 The current-generation Infiniti QX60 has been on sale since 2012. In other words, it’s ancient. That hasn’t really affected its popularity, though. The three-row, midsize crossover was Infiniti‘s best-selling model last year, and has historically held its own against robust competition like the Acura MDX and the Volvo XC90. Still, Infiniti needed to bring this SUV out of the stone age, and it looks like it has with the introduction of the redesigned 2022 model.

It only takes a quick glance to see that this new QX60 is a drastic design departure from the 2020 version currently sitting on dealer lots. (You read that right: there was no 2021-model-year QX60.) The QX60, in general, has remained handsome over its near-decade lifespan, at least to my eyes. The ’22 model, however, is an absolute stunner with its bold face, sculpted body and creative visual touches like headlights and taillights inspired by piano keys.

The Infiniti QX60’s return for the 2022 model year.  Photo by Manuel Carrillo III.

The same goes for the cabin, especially with those elegant, triangular speaker coves in the door panels. The new interior’s technology is just as much of a leap forward as its design. Considering the 2020 model’s insides are from a time when people were worried about what the Mayan calendar portended, it’s sort of unsurprising that it lacks Apple CarPlay and Android Auto. Not the ’22 version, though. Both varieties of smartphone mirroring come standard, with the Apple version able to project wirelessly. And all new QX60s get a 12.3-inch touchscreen atop the center stack, and Wi-Fi is compulsory as well. Optional tech includes a 12.3-inch digital instrument cluster, a 10.8-inch head-up display, wireless phone charging and a 17-speaker Bose Performance Series audio system.

Standard advanced driver-assistance features include forward automatic braking—with pedestrian detection—and reverse automatic braking. Traffic-sign recognition is optional, as well as ProPilot Assist, Infiniti’s version of lane-centering adaptive cruise control. Now linked with the navigation system, the vehicle can slow down for bends and off-ramps. Additionally, ProPilot Assist with Navi Link can also remain engaged for up to 30 seconds in traffic gridlock while the vehicle is stopped.

The QX60 gets a 12.3-inch touchscreen and Wi-Fi capabilities as standard features, while a 12.3-inch digital instrument cluster and a 10.8-inch head-up display are among the list of options.  Photo by Manuel Carrillo III.

Thanks to the latest QX60 being 1-inch taller and wider than that of its predecessor, interior comfort is better than ever for up to seven occupants sitting under the standard panoramic sunroof. The front “zero gravity” seats are absolutely cosseting, and can now be equipped with nifty massage functionality. And there’s plenty of room to stretch out in the second row, which can come in a bench or captain’s chair variety. Though the captain’s chairs reduce overall occupancy to six, with that arrangement, you get a clever center console that can be easily removed to facilitate movement about the cabin.

It takes only the press of a button to tilt and slide the second row forward for third-row access, all without having to remove any child seats. Once you get all the way to the back, this Infiniti feels noticeably more accommodating. At a height of 5 feet, 10 inches, I found that my head lightly brushed against the headliner in the previous iteration’s last row. I now have full clearance.

Behind the third row, there’s 14.5 cubic feet of cargo space, expandable to 41.6 cubic feet and 75.4 cubic feet with the third and second rows folded, respectively. These measurements are roughly equivalent to what was there before and are average for the segment. If you need to haul more, the QX60 can now tow up to 6,000 pounds when properly equipped; an additional 1,000 pounds compared to last year’s offering.

There is 41.6 cubic feet of cargo space with only the third row folded down.  Photo by Manuel Carrillo III.

Riding on the same basic architecture as the 2020 QX60, the ’22 keeps the current model’s 3.5-liter V-6. The power plant sends 295 hp and 270 ft lbs of torque to the front wheels as standard, or all four, optionally. However, the upcoming QX60 ditches the continuously variable transmission in favor of a nine-speed automatic, which plays a significant role in that increased tow rating.

With all these changes for 2022, will the QX60 provide a drastically different drive experience from past examples? That remains to be seen until we get the chance to jump behind the wheel later this year. As for pricing, expect to see that information by mid-July with sales expected to start in the fall.