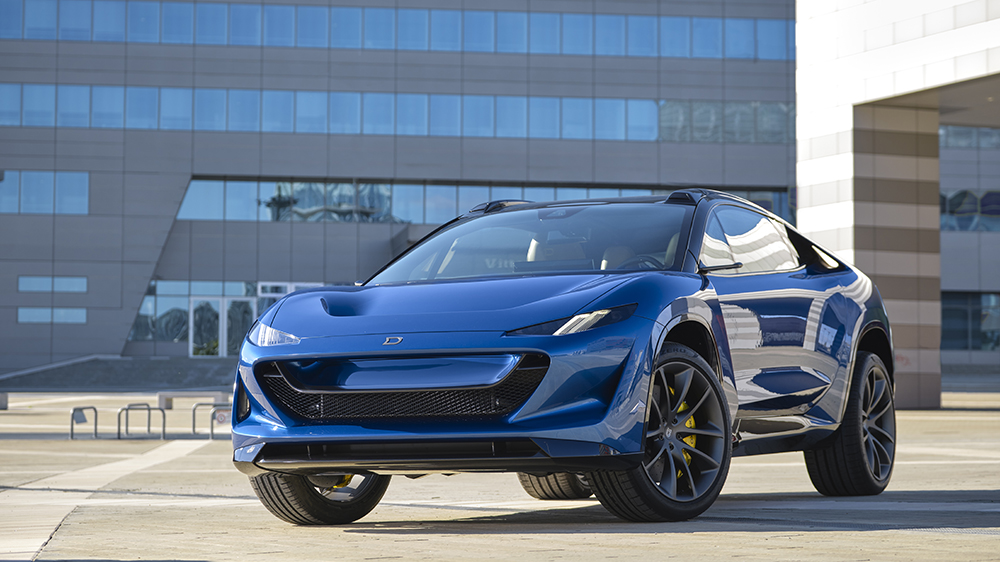 The Dragon is coming into view.

Months after first teasing its second all-electric model, Drako Motors finally unveiled its upcoming super SUV on Thursday. We now know what the gull-winged EV will look like and have a much better idea of what it will be able to do.

The first images we saw of the follow-up to the GTE were all shrouded in shadow, only offering the smallest of glimpses at the vehicle’s Lowie Vermeersch-designed body. Our patience has paid off, though, because the finished EV is striking, looking more like a supercar than an SUV. The Dragon has an aggressive stance and heavily sculpted shape, but there are also subtle curves in the front and back that stop it from looking too sporty. We’re especially struck by the vehicle’s gull-wing doors. There’s only one set, which opens to give riders access to both the front and rear seats. It’s a nice bit of flair, and one you don’t expect to see on an SUV. Razor-thin lighting at both ends of the vehicle also makes it clear that it means business.

The Dragon may look fearsome on the outside, but the inside is another story. The cabin is spacious, with ample room for up to five adults (two up front, three in the rear) and luggage. A panoramic glass roof only adds to the wide-open feel. The leather seats have a tasteful and athletic shape. The dashboard looks rather futuristic and is home to four displays—a digital gauge cluster for the driver, a center-positioned 17.1 inch infotainment touchscreen and two smaller monitors at each end that act as digital side-view mirrors. There are also touchscreens on the back of each front seat’s headrest, as well as warm ambient lighting throughout the interior.

Drako’s battery-powered bruiser looks as if it was designed to go fast, and it sounds like it will be capable of doing just that. It’s built on the California startup’s DriveOS architecture and has a quad-motor powertrain. There is a motor positioned on each of the Dragon’s wheels—giving it all-wheel drive—and they combine to generate a hair-raising 2,000 horses (unfortunately, a torque figure is still not available). Thanks to this powerful setup, the EV can rocket from zero-to-60 mph in 1.9 seconds, cover a quarter-mile in nine seconds and reach speeds over 200 mph.

That’s not the only kind of performance you can expect from the Dragon. The SUV is equipped with a custom-developed battery pack that will give it a range of 420 miles, which is more than any EV other than the Lucid Air. A promised maximum charging rate of 500 kW will also allow you to charge the battery from 10 to 80 percent in just 10 minutes—no small feat if the company can actually deliver on that claim.

If the Drako Dragon has managed to catch your eye, be prepared to wait. You may be able to place a reservation for the super SUV now, but the brand doesn’t expect deliveries to commence until 2026. As long as that may be, we have a feeling more than a few people will be able to wait and pay $290,000 for this most ferocious of EVs.

Click here to see more photos of the Drako Dragon.