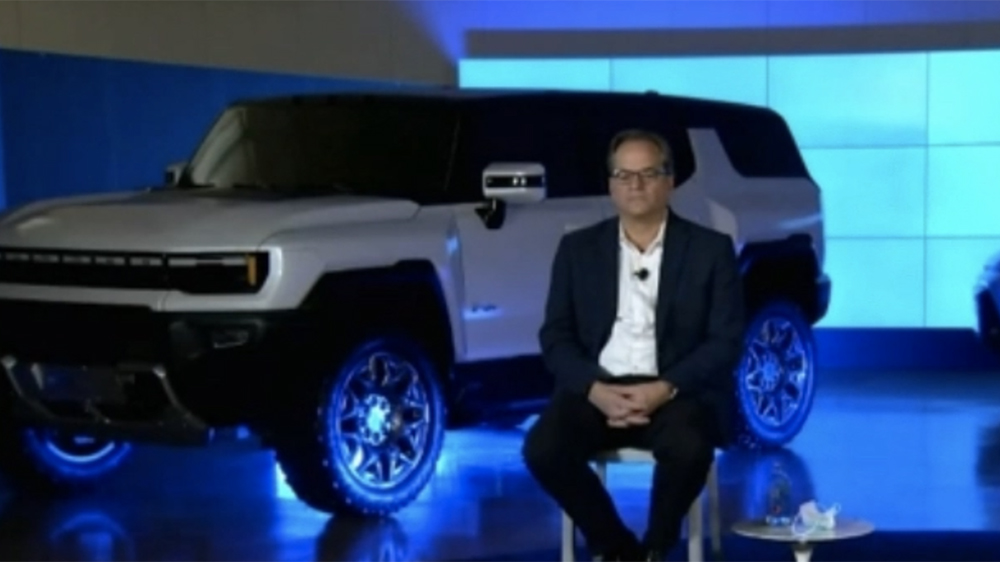 Las month, the reborn Hummer EV’s public unveiling created as much buzz as any vehicle debut in recent memory. The SUV version of the truck, on the other hand, made its first appearance in the background of a General Motors investment call.

That’s because the American automaker casually offered up the first real look at the eagerly anticipated electric SUV during a digital investor conference earlier this week, according to Road & Track. And while we’ll have to wait a couple years for the variant to be available for purchase, the glimpse, along with info from the SUV’s debut, give us a pretty solid idea of what to expect.

The unexpected cameo was captured and shared by an eagle-eyed user over on the Hummerchat.com message board on Thursday. In a screen shot of the moment, you can see the long-roofed version of the burly SUV parked behind GM CEO Mary Barra and another executive. Though the image resolution leaves something to be desired, you can clearly see that the variant looks just like the rough and rugged truck, only with an interior cabin that extends all the way to the rear of the vehicle. If anything, it looks more like the Hummer H2 than the truck model does.

It has been suggested that the reveal was inadvertent, and it very well might be, but in the era of viral marketing it’s hard to say for sure. When reached for comment by Robb Report, a representative for GM confirmed that the vehicle featured in the conference call is the Hummer SUV but could not offer any other details.

The side profile of the new Hummer SUV  GMC

This isn’t actually the first peek we’ve had of the SUV, though it is the first detailed view. A Lebron James-narrated ad from late July included a shadow-shrouded glimpse at the vehicle’s side profile. While the teaser only hinted at the size and shape of the vehicle, Thursday’s cameo offered up a clear look at what appears to be a near-production prototype.

The Edition 1 truck version of the Hummer EV is expected to go into production next year. The fully loaded EV, which churns out 1,000 hp and has a range of 350 miles, will start at $112,595, though less powerful—and perhaps less-expensive—models will follow. The SUV with multiple powertrain options is expected to arrive in 2023. So, EV and SUV enthusiasts should have be plenty to hum about before long.