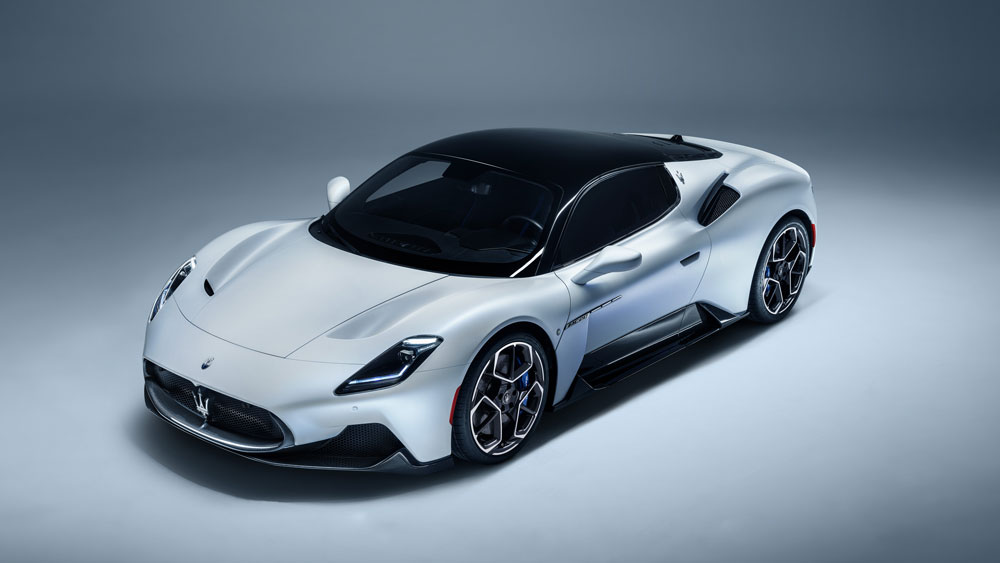 For Maserati, it takes an especially fast car to escape Ferrari’s red-tinted shadow. We can now consider the new Maserati MC20 a 202 mph declaration of independence, now that Ferrari—former, spotlight-stealing cugino in the Fiat Chrysler family—has been spun off to its adoring public.

Maserati live-streamed the debut of its $210,000 MC20 from New York, Tokyo and Modena on Wednesday, with Robb Report enjoying a private showing of the vehicle at the Classic Car Club Manhattan. Maserati sees its mid-engine beauty as the avatar of a newly competitive era, one that includes electric models to come. Where its previous supercar, the MC12 of 2004, shared a chassis, V-12 engine and gearbox with the Ferrari Enzo, Maserati executives proudly call the MC20 “100 percent made in Modena,” the brand’s historic home in Italy since 1940.

The Maserati MC20 on display at the Classic Car Club Manhattan.  Photo by Lawrence Ulrich.

Federico Landini, the MC20’s vehicle line executive, said that “Building the MC20 in Modena is just like producing tortellini and balsamic vinegar there; it’s part of the community’s genetic makeup, part of our company, part of us.”

Racing has also been close to Maserati’s heart, including its now-distant days of Formula 1 championships and driving legends such as Nuvolari, Fangio and Moss. And the MC20 will mark Maserati’s return to track competition after its post-MC12 absence.

Photos of the MC20 do it little justice, masking its suggestive length and eliding key details. Backlit on a platform in New York, the MC20 brings the requisite Italian heat, including the probing, undersea snout that remains a Maserati signature, and a new take on its famous Trident badge. Maserati says the vertical headlamps reach back to the 1953 Maserati A6 GCS for inspiration, even if they’re not round. The Trident is repeated on rear roof pillars, and in abstract form on the transparent polycarbonate engine cover.

The vertical headlamps take inspiration from the 1953 Maserati A6 GCS.  Photo by Aldo Ferrero, courtesy of Maserati S.p.A.

Metal jewelry along the doors alludes to the brand’s familiar porthole motifs. Yet the MC20 eschews cartoonish supercar accessories in favor of elegant understatement, including subtle-yet-functional forms for the hood heat extractors and side radiator inlets that virtually disappear when viewed from certain angles.

According to engineers, the MC20’s wind-tunnel-massaged aerodynamics create so much downforce that no gaudy rear wing was required, only a lip spoiler with a radius as finely carved as a Beaux Arts saucer. That sense of glowing porcelain is enhanced by the “Bianca Audace” paint, which mates a warm white matte with mica-blue undertones to stunning effect.

Butterfly doors supply the theatrical drama that many supercar showgoers demand, along with easy ingress and egress. The push-button-operated doors swing upwards and outwards to expose front wheels and the bravura carbon-fiber passenger tub. That lightweight monocoque helps hold curb weight to a svelte 3,306 pounds. The chassis will support an MC20 coupe, followed later by convertible and electric versions, as Maserati also develops plug-in replacements for its now-retired GranTurismo coupe and GranCabrio convertible.

According to its engineers, the MC20 creates so much downforce that the car does not need a rear wing.  Photo by Daniele Iannoccari, courtesy of Maserati S.p.A.

Maserati, so accustomed to the reflected glory of its Ferrari-based power plants, finally has an engine story of its own to tell. The in-house “Nettuno,” the first Maserati-built power plant since 1998, should become the most powerful V-6 in production. The twin-turbo screamer develops 621 hp and 538 ft lbs of torque from just 3.0-liters of displacement, or 207 hp-per-liter. Put those specs together, and Maserati claims a class-leading weight-to-power ratio versus rivals including the McLaren 570S, Lamborghini Huracan Evo, Ferrari F8 Tributo and Acura NSX.

Maserati pegs the car’s zero-to-60 mph dash at less than 2.9 seconds, and claims it can cover zero to 120 mph in under 8.8 seconds. And we’re eager to see how the V-6’s soundtrack stacks up against V-8 and V-10 rivals, or those Ferrari-powered Maseratis.

Maserati claims the MC20 can cover zero to 60 mph in less than 2.9 seconds.  Photo by Aldo Ferrero, courtesy of Maserati S.p.A.

The patented V-6’s overachieving output, including a 7,500 rpm redline, is aided by a world’s first for a production automobile: Twin-spark combustion technology, which Mercedes-AMG first introduced to Formula 1 racing. Each cylinder integrates two combustion chambers and two spark plugs. An air-fuel mixture ignites in smaller pre-chambers, which have specially designed holes that direct jets of burning gases into lower chambers for a final power-packed ignition.

Maserati engineers say the technology boosts the 3.0-liter’s output by roughly 120 hp, without a heavy toll on fuel economy. The engine easily has the lowest displacement in its class, smaller than even the 3.5-liter V-6 in the Acura NSX hybrid. The dry-sump-lubricated V-6 is the first fruit of the Maserati Engine Lab, where more than 100 engineers, techs and skilled workers will develop and assemble the marque’s power trains of the future.

Analog controls are few and far between, including an ignition switch on the steering wheel. Most duties fall to the new Maserati Intelligent Assistant. This proprietary version of the new Android Automotive multimedia platform runs on dual 10-inch TFT screens—a welcome brand upgrade in user-friendly interfaces. And the frameless, camera-based rearview mirror takes a tech cue from Cadillac.

A blue-ringed driving mode selector accesses five performance settings, from the mellowest GT to a hardcore Corsa. There’s also an optional hydraulic system that lifts the MC20’s front bumper by nearly two inches to avoid scraping its delicate chin over steep driveways and other impediments.

One of the interior’s two 10-inch TFT screens.  Photo: Courtesy of Maserati S.p.A.

As Maserati seeks to reinvigorate its brand, obstacles loom as well. Will enough buyers consider this latest offering a straight-up alternative to a Ferrari, McLaren, Lamborghini or Porsche? That question will be answered soon enough: Maserati says MC20 production for Europe will commence late this year, pandemic be damned. Stateside customers should see initial deliveries in the fall of 2021. When it comes to impacting the market, Maserati’s smallest-engined supercar—with its alluring style and intriguing specs—may just generate some impressive noise after all.