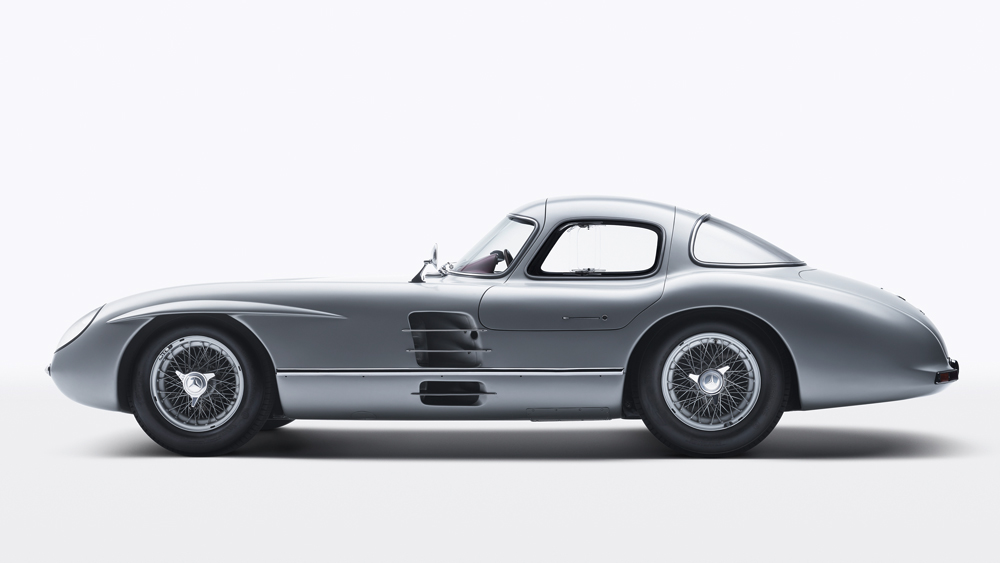 It’s the sort of thing that only Mercedes-Benz could really do.

On Thursday, at the Côte d’Azur’s new Maybourne Riviera hotel above Monte Carlo, Mercedes-Benz capped off its Capital Markets Day summit for investors with a couple of groundbreaking reveals. Formula 1 racers Lewis Hamilton and George Russell helped officially debut the all-electric Vision AMG concept car in what, on any other occasion, would be a truly grand finale. It’s hard to believe that a car representing such a pivotal shift for AMG could be upstaged, but indeed it was.

Less than an hour after the Vision AMG was made public, Ola Källenius, CEO of Mercedes-Benz, announced what’s claimed to be not just the world’s most expensive car sold at auction, but the priciest, period. A 1955 Mercedes-Benz 300 SLR Uhlenhaut Coupé, surprisingly on display for attendees, fetched a record-obliterating $142.8 million at an invite-only event presided by RM Sotheby’s at the Mercedes museum in Stuttgart, Germany, on May 5.

The car is one of only two prototype racers developed by engineer Rudolf Uhlenhaut and his team for the 1955 Carrera Panamericana. That year’s competition, though, was called off, and Mercedes abandoned motorsport entirely, all due to the infamous Le Mans tragedy—that June—where Pierre Levegh and his SLR catapulted into the crowd, killing the driver along with 83 spectators. Uhlenhaut’s project was subsequently shuttered and this particular example, fit with a 297 hp inline-eight engine mated to a five-speed transmission, came into his possession. The fact that its top speed was touted to be approximately 186 mph only added to this 300 SLR’s mystique.

“As the saying goes: Never say never,” Källenius said when breaking the news. “We have been approached many times over the years by collectors, museums and other interested parties wanting to buy an Uhlenhaut; we’ve always said no. But it has become increasingly clear to us that having our heritage hidden away in the holy halls is, in some ways, a missed opportunity. These incredible cars are works of art and should be more widely celebrated. We thought, ‘Wouldn’t it be interesting to see what it’s really worth . . . and what if we did something good with the money, something for society?’”

That thought process led to the formation of the Mercedes-Benz Fund, which the sale of the Uhlenhaut Coupé helped start. Renata Jungo Brüngger, a member of Mercedes-Benz’s Board of Management for Integrity and Legal Affairs, refers to the proceeds as “seed money” for what she describes in the official statement as a “global scholarship program supporting young people in their studies, commitment and actions toward a more sustainable future.”

It’s fitting that the location on the French Riviera, not far from where Mercedes first came to life on a racetrack in Nice back in 1901, was the stage for the world’s oldest automaker to spotlight these two disparate machines. Although separated by nearly seven decades, each now fulfills the same purpose of illuminating the storied marque’s road ahead.