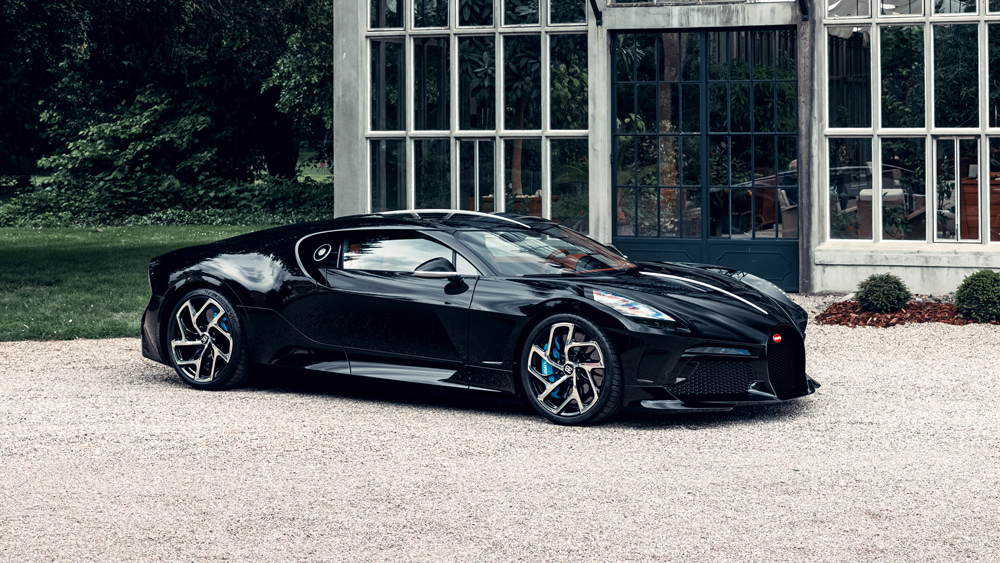 According to Ettore Bugatti, the core principles behind every car bearing his name could be distilled to the following: “Pure blood, absolute clarity, predominance of purpose, immaculate shape.” Some 112 years after his eponymous marque was founded, those four pillars continue to support Bugatti Automobiles and anchor every new project.

On May 26, this point was driven home in an exclusive briefing that gave a select few a deeper dive into the Divo and Centodieci, as well a peek at the one-off La Voiture Noire, soon to be delivered. Until now, the world had only seen the concept version of the latter, which premiered in Geneva and graced the lawn at Pebble Beach in 2019.

“For us, the biggest challenge is to keep the final car, the production car, as close as possible to the show car,” said Nils Sajonz, head of Special Projects at Bugatti Design. “In terms of proportion, we tried to remain very close . . . there are some things changing due to regulations and technical requirements, but it’s more about the details.”

Sajonz cited the front lights as an example of a minor difference due to, as he put it, “having to fulfill the light-spreading parameters” of local regulations, but added that “basically, everything you see here is more or less what we had on the show car.”

Pecking order in the most rarified automotive upper echelon is based on power and price, and no other car can top La Voiture Noire when factoring in both. While Rolls-Royce just revealed its unique, 19-foot-long Boat Tail with 563 hp and a price confirmed to be north of $13 million, the Bugatti packs 1,500 hp and sold for $18.7 million (after taxes). It’s not only the crème de la crème from the French automaker, it represents Bugatti’s return to its original coachbuilding era, a period from 1923 until operations shuttered in the mid-1950s.

It’s fitting that this, the automaker’s newest milestone, was directly inspired by a car that’s considered not only one of Bugatti’s most renowned models, but one of the most revered automobiles ever created: the Type 57 SC Atlantic designed by Jean Bugatti. Of the four made (of which just three are believed extant) the contemporary hypercar’s namesake is the near-mythic 1936 example, chassis No. 57453, which was piloted by Jean himself and seemingly vanished after World War II.

The elongated wheelbase was a conscious effort to situate the cabin farther aft, as with its 1930s-era predecessor.  Photo by Keno Zache, courtesy of Bugatti Automobiles S.A.S.

“The Type 57 Atlantic was the ultimate GT . . . and this is what we tried here,” said Sajonz. He pointed to La Voiture Noire’s elongated wheelbase, a conscious effort to situate the cabin farther aft, as with its predecessor. As for the rear of the vehicle, the designer directed attention to the illumination system as a standout feature: “It’s done from just one single piece, making it maybe the most complex taillight in today’s automotive world.”

Adjustments were also made to reduce the volume of the hood area to more closely match the model it pays tribute to, according to Sajonz. “Overall, our task as a design team was to create a super-reduced, timeless piece of automotive art,” he said.

To highlight the brand’s renewed emphasis on a coachbuilding approach to extremely limited-edition and one-of-one releases, Sajonz and Pierre Rommelfanger, Bugatti’s head of coachbuilding projects, also hosted brief walkthroughs of Bugatti’s Divo and Centodieci models, comprising only 40 and 10 examples, respectively.

A prototype of the Centodieci.  Photo: Courtesy of Bugatti Automobiles S.A.S.

While the Divo was presented alongside La Voiture Noire, the Centodieci was only available by way of images, as the car is currently being track-tested at Germany’s famed Nürburgring, where performance metrics are being measured and fine-tuned as part of the car’s development process.

As for the long-term viability of these ultra-exclusive offerings, Rommelfanger avoided going into specifics, saying only that “they are one pillar in the Bugatti brand, and every project, on its own, has to be a business case.” Whatever that case may be, it certainly seems to be working. Just last month, Bugatti reported the highest number of deliveries in Q1 of this year than any quarter to date.