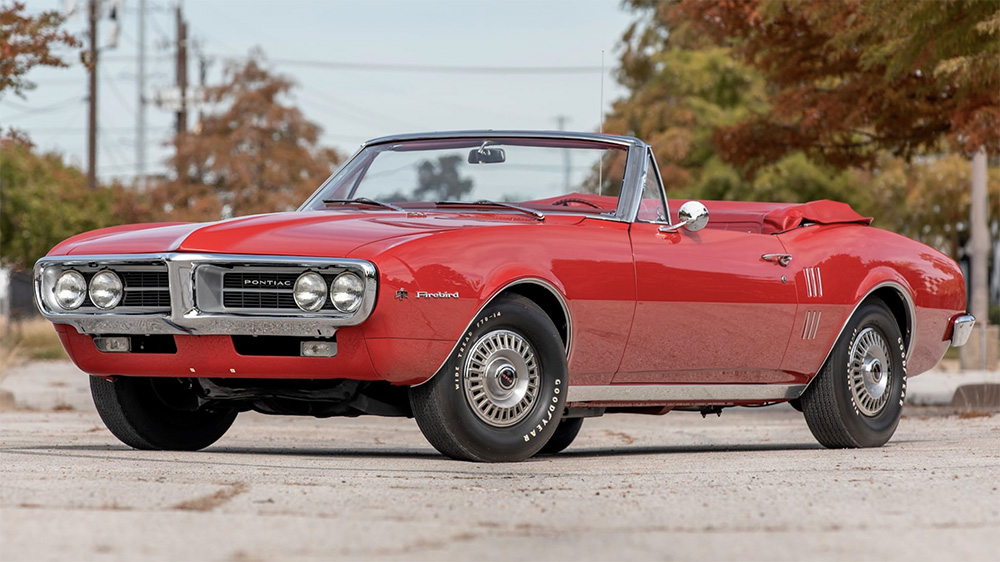 American muscle cars of the late 1960s and early ‘70s have unique cachet among collectors, and the Pontiac Firebird is no exception. Now the very first example of legendary car is up for grabs.

A red 1967 Firebird convertible is schedule to hit the block as part of Mecum Auction’s annual Kissimmee sales later this week. And this car isn’t just one of the first Pontiac produced; it’s the first, with serial number No. 001 to prove it.

The Firebird is currently owned by Richard Rawlings, the owner of Dallas’s Gas Monkey Garage and host of Discovery’s long-running Fast N’ Loud series. Back in 2014, he purchased the muscle car after discovering it in storage in a Connecticut garage. The vehicle went through “nut and bolt concours rotisserie restoration” over the course of two episodes of the long-running car show.

The car was refinished in Regimental Red and outfitted with a new interior that includes bucket seats, a deluxe steering wheel and simulated wood trim. Under the hood, you’ll find the factory L30 326cl V-8 fitted with a 2-barrel Rochester carburetor which is still mated to its original column-shifted Powerglide 2-speed automatic transmission. The car, which has 80,389 “believed-original” miles on it, comes with all the factory build sheets and all its original documentation.

If you love classic Firebirds but prefer the silhouette of the hard-top coupe, Mecum and Rawlings have you covered. The reality star also owns the second Firebird built—which was rediscovered and purchased at the same time as the first—and is selling through the auction house, too. No. 002 features a silver body and a black vinyl hard top. Like the convertible, it’s been lovingly restored. It features the original engine and transmission and has even fewer miles (58,028) on the odometer.

Rawlings’s Firebirds will go up for bid during Mecum’s upcoming Kissimmee show. The annual auction runs from January 6 to 17, and will see 3,500 rare and exclusive autos cross the auction block. If you want to add  either of the host’s muscle cars to your collection, though, prepare to cough up six figures for each. No. 001 is expected to hammer down for between $175,000 and $225,000, while the auction house expects the No. 002 to fetch between $115,000 and $135,000.