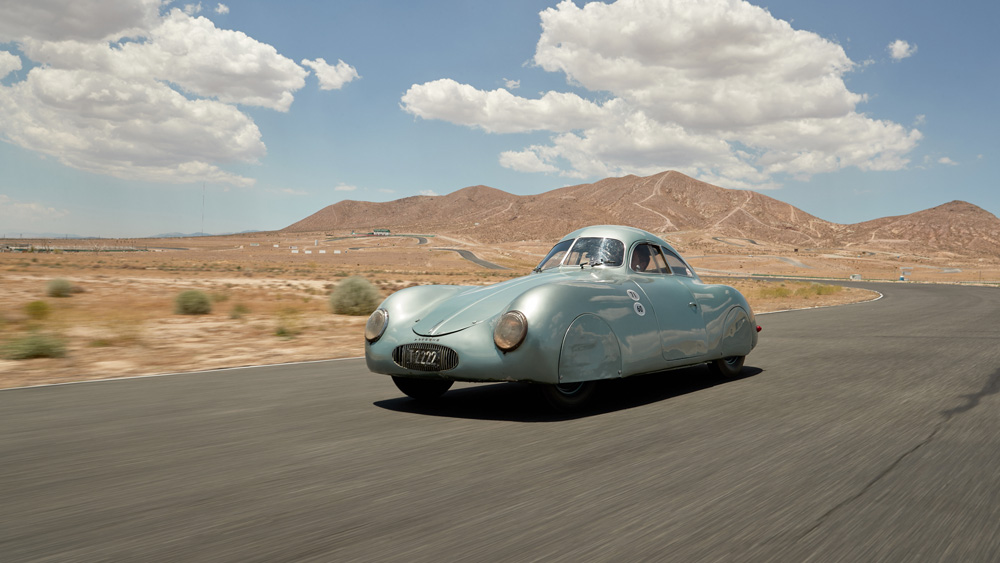 The 1939 Porsche Type 64 was supposed to be one of the highlights of the sales at this year’s Monterey Car Week. But because of what is being called the “biggest auction blunder” in recent memory, the silver speedster is still in search of a new owner.

RM Sotheby’s sale of the Nazi-era “first” Porsche, which was expected to be the high point of the annual car event, quickly devolved into chaos on Saturday evening, reports Bloomberg News. Following a genuinely confounding series of events, the auction was terminated without the car’s $17 million reserve being met.

A standing-room-only crowd was on hand to see if the silver, tear-drop-shaped coupe, the only surviving car driven by Ferdinand Porsche, would surpass sales estimates of $23 million at the Monterey Conference Center. As shocked as those in attendance were when bidding began at $30 million, and then quickly reached a record $70 million, they were even more taken aback when the auctioneer announced that bidding had actually only reached $17 million.

“It says 70, guys,” the auctioneer could be heard saying in a video of the event. “It’s 17. It’s a bit exciting to write seven-zero. It might be my pronunciation.”

During the entire auction, the quickly escalating prices being read off (first $30 million, then $40 million and on to $70 million) had been displayed on a screen within the auction theater, so the riled-up crowd was both dismayed and confused when it too updated to show the $17 million sum. The startling announcement was greeted with boos and shouts, with some wondering if it had all been a joke and others walking out of the theater. Sotheby’s, of course, was the auction house that sold a Banksy for $1.4 million last year, moments before it self-destructed in front of a shocked audience.

The confusing end to the sale seems to have been the result of a miscommunication between the auctioneer and prospective buyers, according to The New York Times. In addition to the audience having trouble understanding the auctioneer, bidding increments were read off in the tens of millions rather than $1 million or less.

“When they mentioned 30 million to start, I thought that’s quite a strong starting price,” David Lee, a Los Angeles-area car collector, told the paper. “The auctioneer had a British accent and didn’t say the teens well. Is he really saying 30 or 13?” According to a report from CNBC, the auctioneer actually had a Dutch accent.

In a statement to Robb Report, RM Sotheby’s said it had been unable to “reach common ground between seller and buyer on the night.” The auction house went on to explain: “As bidding opened on the Type 64, increments were mistakenly displayed on the screen, causing unfortunate confusion in the room. We take pride in conducting our world-class auctions with integrity and we take our responsibility to our clients very seriously. This was in no way intentional on behalf of anyone at RM Sotheby’s, rather an unfortunate misunderstanding amplified by excitement in the room. The car did reach a high bid of $17 million but did not meet reserve. We will continue making every effort to sell the car.”

Even before Saturday’s confusing failure, the auction market had been sluggish at this year’s Monterey Car Week. Bloomberg New reports that through Friday, sales were down 25 percent, or about $50 million, from last year. The top seller, a 1994 McLaren F1 “LM-Specification,” that RM Sotheby’s expected to sell for $23 million, went for just $19 million on Friday.

For one of the first Porsche Cars built….

A post shared by David Lee I Ferrari Ambassador (@ferraricollector_davidlee) on Aug 18, 2019 at 12:35am PDT