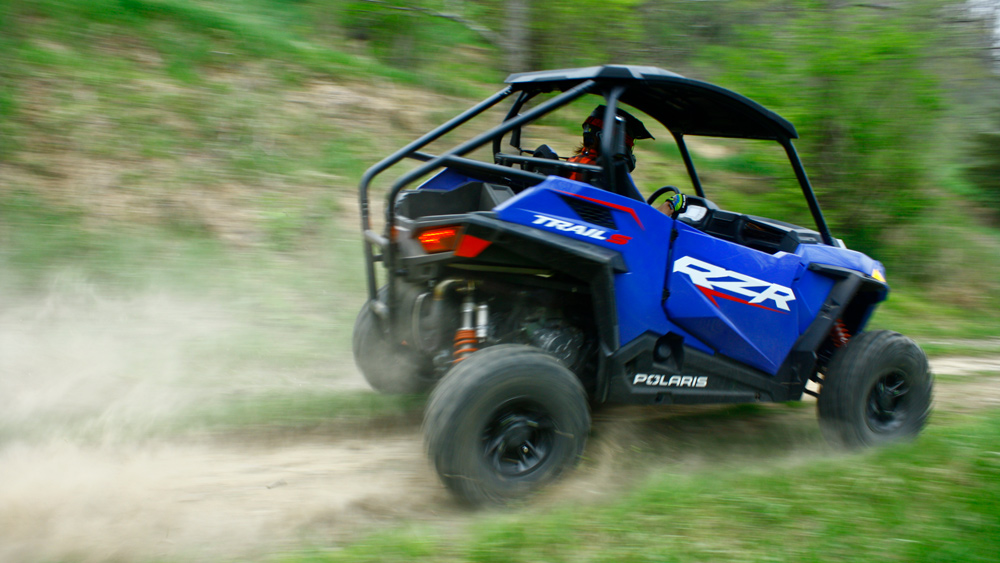 When it comes to off-roading, overlanding and the adventure lifestyle in general, mainstream accessibility has, by the very nature of these activities, not been in the equation. Historically, these are incredibly niche pastimes and sub-cultures, but that is beginning to change. In the past few years, and especially since 2020, this shift is evidenced by the latter’s increased coverage, product spotlights and targeted content filling social-media news feeds.

However, while the bar for entry has been significantly lowered across the board, the world of recreational UTVs (utility task vehicles) still skews heavily towards hardcore enthusiasts. It might not look like it at first glance, but the RZR Trail S is part of the Polaris brand’s first big step in appealing to a larger audience.

The spiritual home of recreation UTVs is the American southwest. Wide-open deserts and generously sized trails mean that high-powered, insanely wide machines rule the roost, and catching big air is almost always in the cards. That is not the RZR Trail S.

The RZR Trail S, which I recently tested in the heart of Pennsylvania, is a machine best suited for narrow forest trails. Polaris’s new entry-level model doesn’t have trophy truck power figures or the dimensions of a mini monster truck, and I’m very thankful for the lack of both.

With a 60-inch width, a 79-inch wheelbase and 100 hp on tap, the RZR Trail S 1000 Premium—one of three variants in the line—is not just capable, but surprisingly approachable for newcomers to UTVs, full stop. The brightly colored Polaris Blue example I rode has an aesthetic that’s reminiscent of the more extreme, performance-oriented end of the UTV spectrum, but the other two versions come in more subdued white and gray liveries. Visuals aside, it’s what’s under the plastic that makes the Trail S so user friendly: the power train and suspension.

The 999 cc twin-cylinder engine has just the right amount of output for tight gravelly trails with the occasional boulder field and log crossings. It never wants for power, while the Walker Evans needle shocks make the Trail S 1000 Premium more manageable and tame than any other entry-level UTV I’ve piloted.

This is a machine suited for tight forest trails.  Photo by Bryan Campbell.

The well-sorted suspension setup underneath makes a night and day difference, especially off-road. Baseline UTVs of old always seemed to put ride quality far down on the list of priorities. Even if it was a compromise to keep the price down, that approach put novice riders at a dangerous disadvantage. It meant a harsher ride and, more critically, less control. UTV’s have a notorious reputation for being unwieldy beasts at times, and subpar shocks and springs are no help.

Whether dancing down a gravel trail at 55 mph or crawling over rocks and logs in a creek bed, the Trail S feels just as capable as it is user-friendly. Its narrow width, short wheelbase and tight turning circle make traversing the usual obstacles and tight tree gates a breeze, and much less intimidating—exactly what the UTV market needs if it wants to lure more of the newfound adventure crowd.

Thanks, in part, to Walker Evans needle shocks, the Trail S 1000 Premium makes the terrain easier to tame.  Photo by Bryan Campbell.

After putting the Premium through its paces, I’m not convinced the extra power of the bigger engine is necessary. And it’s not like the S 900 Sport was given a raw deal on suspension—it uses Fox 2.0 Podium shocks, which were considered a serious upgrade for top-tier models not that long ago.

Traversing the usual obstacles and tree gates is a breeze due to the vehicle’s narrow width, short wheelbase and compact turning radius.  Photo by Bryan Campbell.

As far as building a novice-friendly machine, however, Polaris knocked it out of the park with the Trail S 1000 Premium. Whether or not the growing adventure-curious crowd takes a liking to the plastic, super-motocross vibes it still carries is a different story. Regardless, if and when those new to the world of UTVs do make the jump, the Polaris RZR Trail S line is where they should land.