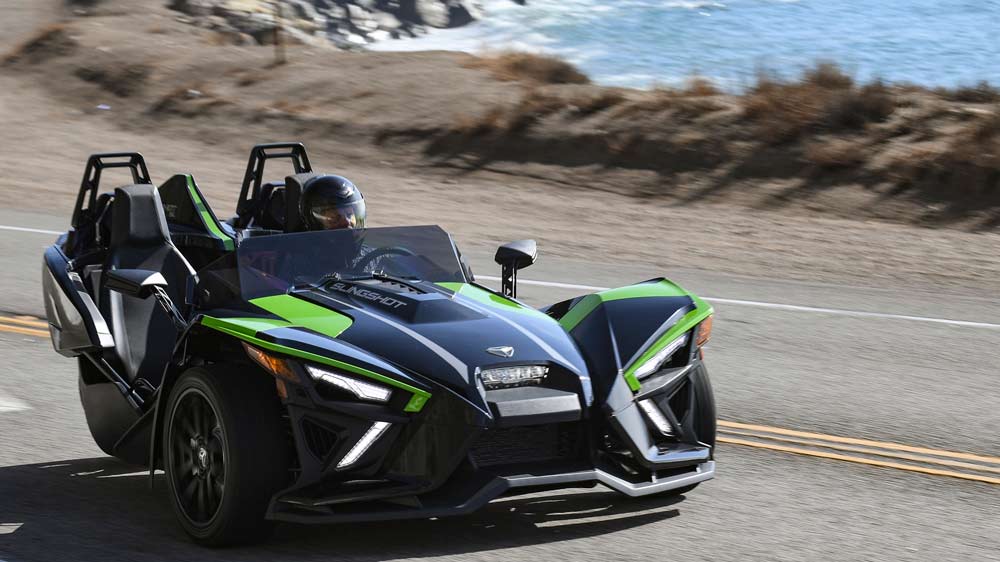 Flanked between steep canyons and the ocean, Southern California’s Pacific Coast Highway is a magnet for drivers who want to exercise their supercars. And the epicenter where they gravitate to see and be seen is a stretch in Malibu that includes dining hot spot Nobu, the Surfrider Malibu hotel and what’s been nicknamed “Billionaire’s Beach.” Against this backdrop, the latest Ferraris, McLarens and even a Pagani or two are de rigueur sightings, which is to say that it takes a lot to turn heads. That, however, seems to be a constant occurrence as I now join the exotics parade on that same stretch. It’s no surprise, though, since I’m in a 2021 Polaris Slingshot.

Admittedly, the three-wheeled Polaris can be, well, polarizing. It resides in the automotive hinterlands, not quite a motorcycle or car, and can alienate purists in both camps who have yet to get behind its wheel. But once in the pilot’s seat, even the most cynical are treated to a motoring experience simultaneously raw and refined—the machine’s low profile and open cockpit creating an extremely visceral intimacy with the road and environment.

After collecting stares while cruising south along PCH, I take a left onto Las Flores Canyon Road and begin the serpentine ascent of the foothills. It’s here, winding toward the ridgeline, that two recent enhancements to the model are showcased—the AutoDrive transmission and the addition of paddle shifters, the latter being new for this year. Now the Slingshot can be operated in either full automatic mode or drivers can opt to quickly and efficiently cycle through the five gears of the hydraulically actuated, synchromesh transmission on their own. Whether upshifting—optimal at roughly 5,000 rpm—on brief sections of climbing straightaway or dropping to third or second gear on descending hairpins, I find the response is precise and reflects the brand’s recent focus on increased performance.

Introduced in 2015 from the company known for its snowmobiles, the Slingshot was only available in manual until the 2020 version, when a new power-train configuration was debuted. “We had used an off-the-shelf engine from GM in our original model years,” admits Polaris Slingshot vice president Chris Sergeant. “It was a great engine, bulletproof, but it didn’t quite fit the personality of the vehicle. And so we developed our own four-cylinder dual overhead cam 2-liter, the Polaris ProStar, which is in the machine now.”

Sergeant goes on to cite that in 2019, only 1.5 percent of cars sold carried a manual transmission. “The writing was on the wall,” he adds. “With our new engine, we felt it was a possibility to go a different direction and landed on the automated manual transmission [AMT].”

In addition, he notes that the selection was 55 pounds lighter than the next viable option and so still keeps the roadster in the 1,750-pound weight limit that allows the Slingshot to be federally regulated as a motorcycle. “The AMT was the best solution,” he says. “It’s mechanically simple and gives drivers who don’t understand how to use a manual, the experience of a manual . . . but it’s a computer shifting for you.”

Carving a canyon road above Malibu in the new Slingshot SL.  Photo by Barry Hathaway/Brand Amp, courtesy of Polaris Inc.

According to Slingshot’s product manager Garrett Moore, the engineering modifications result in the power delivery being noticeably different from past iterations. “It’s going to feel a lot smoother,” he says. “It’s the same kind of power band through the rev range, but it’s just going to feel really connected taking off from a stop or shifting through the gears.”

The translation of steering input to the road is also fine-tuned thanks to two drive modes—Comfort and the sportier Slingshot—and the independent, double wishbone suspension that accurately and rapidly transmit intent to the aluminum wheels dressed in Kenda SS-799 rubber. Even on tight corners and sections of light gravel, the rear tire remains unexpectedly true to the line and helps inspire more confidence than other three-wheeled rides, as does the larger track width of 69.1 inches and longer wheelbase of 105 inches, both adding greater stability.

Options for the 2021 model year include the Stage 3 roll hoop audio kit by Rockford Fosgate and seats that have integrated heating and cooling.  Photo by Barry Hathaway/Brand Amp, courtesy of Polaris Inc.

Sure, the Slingshot’s aggressive aesthetic and ABS plastic bodywork may not be to everyone’s taste and lack the retro elegance of, say, models from Vanderhall Motor Works or Morgan, but the look makes for a visually arresting mode of transport nonetheless. Like the unmistakable styling of a Lamborghini, you either love it or leave it. But appearance aside, the vehicle imparts a sense of security in traffic that’s lacking in many of its counterparts. This is due to its overall size and presence, even though it sits only 5.4 inches above the ground.

The model is currently offered in four variants—the S, SL, R and R Limited Edition—each offering increasing levels of standard amenities and, in the case of the R versions, a boost in power. Starting prices range from $19,999 to $32,799 depending on trim packages selected.

After a full morning in the SL, I switch with Sergeant and take his R model out on a date with neighboring Encinal Canyon. The top-tier R ratchets up the output from 178 hp and 120 ft lbs of torque to 203 hp and 144 ft lbs of torque. It also covers zero to 60 mph in 4.9 seconds and has a limited top speed of 125 mph.

Although the R can come with AutoDrive (all models offer both transmission choices), this example is fit with a purely manual 5-speed gearbox and is, in my opinion, the only way to go for those who grew up with a clutch. Not only does the control vastly improve but the gear-shift action is as smooth as a Sade soundtrack.

And when it comes to sound, the new 100-watt Rockford Fosgate Audio System—mated to the Polaris Ride Command infotainment system with Apple CarPlay—is stout enough to fill the cockpit, despite the competing harmonics from the engine and surrounding air flow. Add to that the optional seats with integrated heating and cooling, and the interior makes longer road trips a surprisingly seductive proposition.

Also alluring are the eye-catching exterior trim selections that premier this year, including seven more detail colors and, for the R, a multi-hued Neon Fade and black badging. Targeting new enthusiasts and veteran motorcyclists looking for a more recumbent alternative, the 2021 Polaris Slingshot launches the three-wheel market forward in innovation and acceptance—all while pulling plenty of attention along the way.