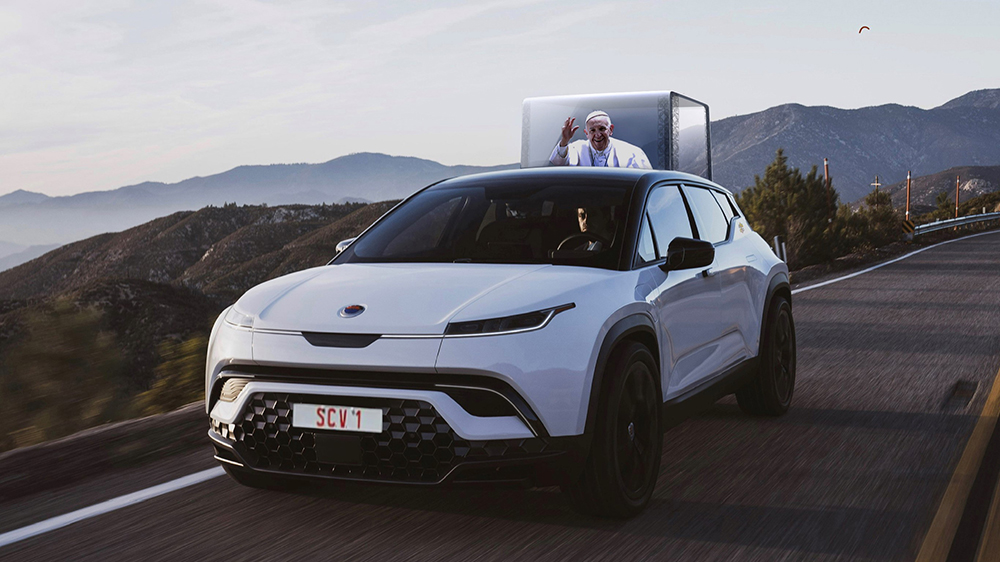 The Pope is about to get an electrifying new holy roller.

EV startup Fisker has just announced it will develop the first all-electric vehicle for the Holy See after meeting with Pope Francis on Thursday.

The marque’s co-founders, Henrik Fisker and Dr. Geeta Gupta-Fisker, said they were spurred on by the Pope’s eco-friendly views and subsequently pitched him the new battery-powered Popemobile.

“I got inspired reading that Pope Francis is very considerate about the environment and the impact of climate change for future generations,” Henrik said in a statement.

His Holiness greenlit the papal four-wheeler and set the wheels in motion for future emissions-free cruising.

Henrik Fisker and Dr. Geeta Gupta-Fisker presenting their proposal to the Pope.  Fisker

The new Popemobile will be based on Fisker’s upcoming Ocean electric SUV. The design is pretty much the same save for the all-glass cupola popping from the roof. This unique feature will give Pope Francis the ability to greet the faithful while also keeping him safe and comfortable. In case the Pope’s presence wasn’t clear enough, the Vatican’s insignia is also emblazoned on the D-pillar.

Papal duties will likely be a breeze thanks to the Ocean’s 80 kWh battery pack that delivers an estimated range of up to 300 miles. A dash to the Vatican will be no trouble, either, since the car can reportedly sprint from zero to 60 mph in just 2.9 seconds.

The Popemobile can reportedly sprint from zero to 60 mph in just 2.9 seconds.  Fisker

The interior, meanwhile, will be crafted from a variety of sustainable materials, according to Henrik. This includes carpets made from recycled plastic bottles that have been retrieved from the ocean. The non-holy SUVs will also be outfitted with the same sustainable materials. Fisker plans to deliver the Pope’s Ocean next year, with full production slated to start November 17, 2022.

To date, the automaker says there are more than 16,000 reservation holders for its forthcoming electric SUV, which starts at $37,499. Fisker is also offering a premium model that offers all-wheel drive and a range of approximately 350 miles, though the price has yet to be revealed.

A sketch of the new EV signed by Pope Francis.  Fisker

Pope Francis isn’t the only world leader switching to a more ethical ride. Just yesterday, President Joe Biden announced he may electrifying the presidential limo, better known as the “Beast,” along with the entire White House fleet. Hey, we’d probably do the same after taking the new all-electric Ford F-150 Lightning for a test drive.