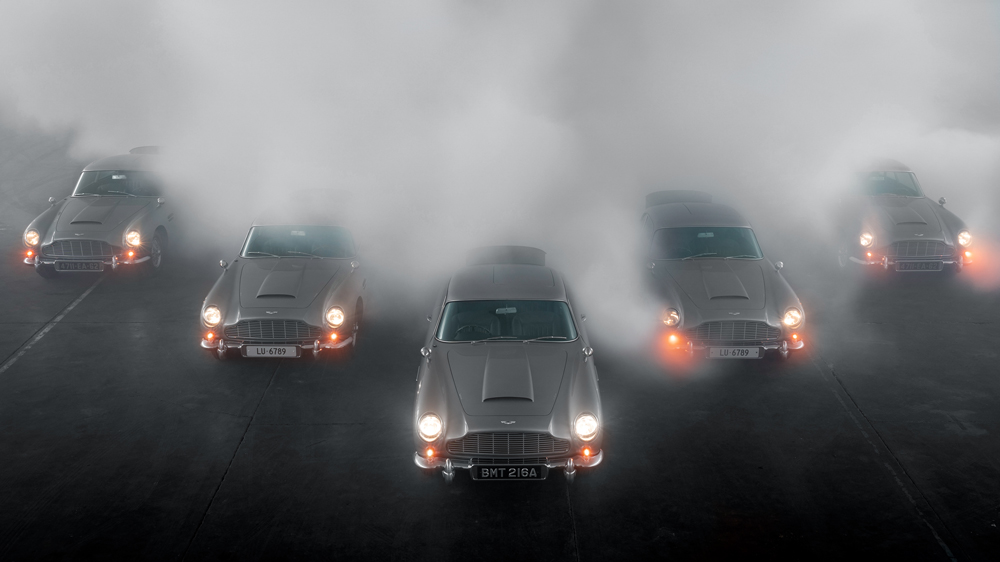 It’s hard to improve on an original film. But in the spirit of the 1964 spy thriller that cemented the Aston Martin marque in the minds of mainstream moviegoers worldwide, the British carmaker has produced an ambitious shoot that puts five DB5 Goldfinger Continuation cars together for an unrepeatable photo opportunity.

To celebrate the successful launch of the DB5 Goldfinger Continuation series, Aston Martin corralled five examples—out of the 25 scheduled for production—before going to their owners in the United States, Europe and the Middle East in the coming weeks. Already, a number of the extremely limited run have been shipped to buyers worldwide. The fact that 25 are being built is meaningful, in that each car made represents one of the 25 James Bond films thus far created, culminating with the upcoming release of No Time to Die in 2021.

The Aston Martin DB5, of which 886 coupes were constructed from 1963 to 1965 (along with 123 Drophead Coupes and 12 Shooting Brakes), is regarded as one of the most collectible—and certainly one of the most beautiful—models ever to roll out of Newport Pagnell. While its predecessor, the DB4, is even more coveted and rare in its GT and Zagato versions, when it comes to performance married with pure elegance and panache, it’s difficult to improve on a DB5 finished in Silver Birch with a black interior.

That was the specification of the car driven by agent 007 in the movies, though his had some stealthy accoutrements that enhanced its efficacy as the perfect vehicle for a covert operative. Spy equipment included a bulletproof shield raising from the boot lid, rotating license plates, extending wheel spinners to lacerate the tires of bad guys, machine guns in the front bumpers and even a seat to eject unwanted passengers.

So, in 2019, the Aston Martin factory embarked on creating its most ambitious continuation car to date in association with EON Productions. The DB5 Goldfinger Continuation, developed with the help of the film franchise’s special-effects expert Chris Corbould, OBE, incorporates many of the gadgets—sans ejector seat and operative machine guns—incorporated into the two original movie cars. We assume each is equipped with a radio that plays the theme music on cue, Dame Shirley Bassey’s “Goldfinger,” one of the most memorable movie songs in history.