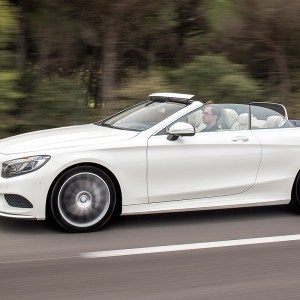 The head of Mercedes-Benz USA picks his favorite routes for the new flagship convertible.

The new Mercedes-Benz S-Class convertible—the brand’s first open-top four-seat flagship since 1971—has gone on sale in the United States. The company is presently offering two variants: the Mercedes-Benz S550 Cabriolet and the higher-performance Mercedes-AMG S63 Cabriolet. The former is powered by a turbocharged 4.7-liter, 449 hp V-8 and has a starting price of $131,400; the latter’s starting price is $176,400, and its 5.5-liter V-8 produces 577 hp. The $247,900 Mercedes-AMG S65 Cabriolet, powered by a 6-liter biturbo V-12, will arrive before autumn. Because the cars will be on the road in time for owners to enjoy top-down summer jaunts, we asked Dietmar Exler, the new president and CEO of Mercedes-Benz USA—and a convertible aficionado (“I’ll drive them year-round”)—to list his five favorite routes for open-air driving.

Topping his choices is 17-Mile Drive, on California’s Monterey Peninsula. “You see the sea lions along the shore,” says Exler. “You can smell the crisp Pacific. It’s a very distinctive smell.”

Exler’s second pick is a sentimental one. “My wife is from Michigan, so I might be a little bit biased,” he says with a laugh as he cites the drive on Highway 31 from Traverse City to Mackinaw City as one of his favorite rides. Exler was born in Austria and is now based in Atlanta, but he worked in Farmington Hills, Mich., in 2004, when he was the vice president of customer service for DaimlerChrysler Financial Services. From Traverse City, Highway 31 runs north along Grand Traverse Bay. It jogs east and continues to Mackinaw City at the northern tip of Michigan’s Lower Peninsula, passing picturesque lakes and waterways along the way.

No less scenic is Florida’s Overseas Highway, particularly the 30-mile stretch of U.S. Route 1 from Homestead to Key Largo. It skirts the eastern border of the Southern Glades and connects the mainland to the Keys. “It’s best to get there toward the end of the day,” Exler says. “With the sunset, and the ocean on both sides of the road, it’s gorgeous.” Exler, who’s 48, has a 1985 SL roadster that he keeps in Florida for when he visits. He plans to move there permanently when he retires.

While Florida is in Exler’s future, Croatia is part of his past. A drive along the Adriatic Highway conjures memories of his childhood. The highway follows the country’s coastline, including the stretch from Zadar to Split, which is the area where Exler and his family summered when he was growing up. “If you drive around the Adriatic, it’s a very different experience,” he says. “There are thousands of islands off the coast, not a whole lot of trees, kind of rough, a little bit desert looking. Just seeing that always reminds me of my vacations of my childhood.”

Exler’s final selection is in his homeland. In northern Austria, the portion of Route B145 from Gmunden to Obertraun winds along the western side of the Traunsee lake, in which, according to legend, an elusive water creature named Lungy lives. “The area is absolutely beautiful,” says Exler. “You go around the lake on slow curvy roads, and you see the mountains on both sides and the extremely clean water.” But so far, no Lungy.