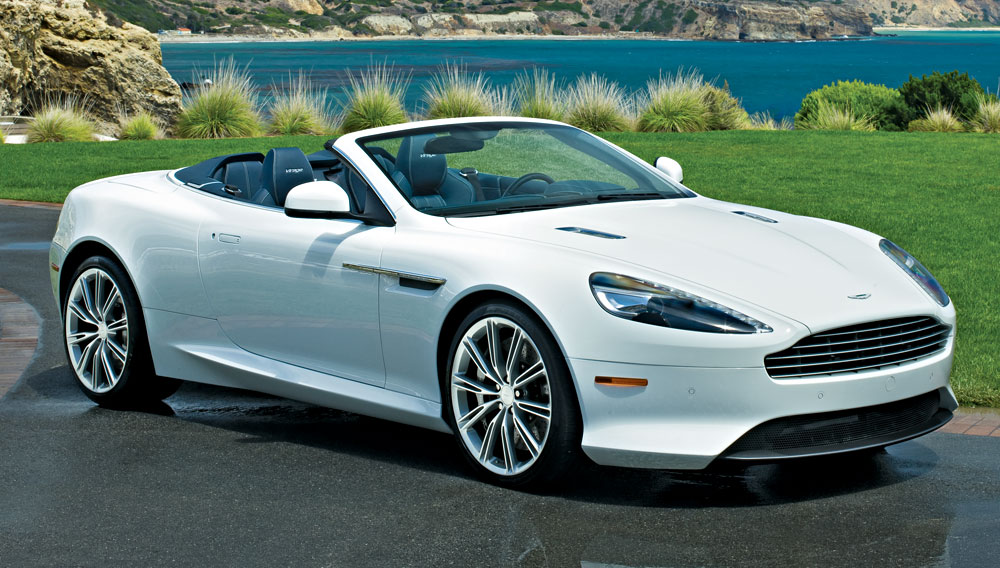 Aston Martin believes in choices. The company already offered an embarrassment of riches ranging from the V-8-powered Vantage to the million-dollar-plus One-77. Now England’s winged wonder—with deference to badges worn by Morgan and Bentley vehicles—has further expanded its selection by introducing the V-12-powered Virage. The new model is available as the two-door hardtop Coupe or convertible Volante; we drove an example of the latter for a few days in and around Los Angeles.

Volante, Aston Martin’s preferred designation for convertibles since it introduced the original Volante in 1965 (see “Magnificent Flying Machine“), is Italian for “flying,” and whether in convertible or coupe form, fly the Virage does. It flies on the road and in the face of staid British convention with bold new lines, a chassis built using state-of-the-art aluminum-bonding technology, and a body and other structures made of composite, magnesium alloy, and aluminum components.

Yet in its hand-built splendor, the Virage, which has starting prices of $210,000 for the Coupe and $225,000 for the Volante, also remains steeped in the tradition of its Newport Pagnell forebears. Its engine requires 20 hours of attention from its builder—the name of the person who performs the final inspection of the engine is engraved on a plaque atop the intake plenum—and its leather interior takes 70 hours to stitch by hand. Thus the Virage is a curious amalgam of cutting-edge invention and old-world craftsmanship.

Though its shape is unique, the Virage bears a familial resemblance to the rest of Aston Martin’s lineup. Like the Vantage (V-8 and V-12 versions), the elusive and ultimate One-77, and even the quirky four-door Rapide, the Virage is respectful of the original lines that Ian Callum developed for the gracefully aging DB9. Callum and his successor, Henrik Fisker (presently heading Fisker Automotive), hit the mother lode with that design, tapping a rich vein of styling cues that have stood the test of a decade’s trends and evolved beautifully into the Virage, the most aerodynamic and up-to-date series-production Aston Martin.

The Virage cuts a long, low profile. While the car’s overall appearance is understated and refined in the manner expected of an Aston Martin, its assertive lines and creases give it an aggressive stance, especially at rest. Distinctive bi-xenon headlamps swoop far back into the front fenders, and LED sidelights are incorporated into the nacelle, emphasizing the car’s length and immediately distinguishing the Virage from any other vehicle. A side strake beautifully blends from fender to door and evokes a similar design element in the original Volante. Swooping, too, are the signature swan-wing doors, which elegantly lift up and out at an angle of 12 degrees to aid ingress and avoid scraping against high curbs.

The Virage’s mechanical underpinnings feature a potent, creamy-smooth V-12 engine. The mill is assembled by hand at Aston Martin’s engine facility in Köln, Germany, and then shipped to the company’s recently constructed factory in Gaydon, Warwickshire, England. There, the engine is mated with the Virage. Its specifications will warm the heart of any motorhead: The all-aluminum, 5,935 cc engine breathes through 48 valves driven by four cams. Classic in architecture, the mill develops 490 hp and 420 ft lbs of torque at 6,500 rpm. But it delivers 85 percent of that torque at a loping 1,500 rpm. In a car destined for long hauls on open roads, nothing exceeds an easygoing V-12 in delivering comfort, smoothness, and sophistication.

While not a torque monster like some of today’s big Vees, the Virage is still plenty quick, accelerating from zero to 60 mph in about 4.5 seconds and, according to the factory, capable of reaching 186 mph.

That top-speed figure applies to the Volante whether the top is up or down. The convertible is—thanks to its thick, well-insulated fabric hood (as the British call the top)—as soundproof and as civilized as the coupe, but its reason for being is best appreciated with the top down and cares thrown to the wind. A ballet of servos and mechanical odds and ends stows the canvas beneath a sleek tonneau and transforms a good-looking car into supermodel material.

With the wind deflector in place, the Volante’s occupants can converse at polite decibel levels—even when the car is at speed. They also can enjoy music from the optional 1,000-watt Bang & Olufsen sound system, which impresses with its trademark tweeters that rise more quickly than fairy-ring mushrooms from the dash and produce a credible soundstage for great music recorded in venues large and small. The exhaust is another source of auditory pleasure. In Sport mode, the Volante emits a spine-tingling rasp that is as raucous and inappropriate as it is addictive. Savor it in small doses, or at least away from the neighbors, libraries, and hospital zones.

Sport mode, which is engaged by pushing a button on the dash, remaps the shift points of the Virage’s Touchtronic II 6-speed automatic transmission so that the system holds gears until redline. Sport mode also opens the exhaust flaps for greater gas flow.

Aston Martin does not offer the Virage with a manual transmission, but the ZF-engineered gearbox is ideally suited to the flexible V-12. You shift gears using leather-covered magnesium paddles or, on lazy days, the glass button on the dash marked “D.” It is adjacent to the formidable electronic key, which is centered amid a tidy layout of buttons.

At almost 4,200 pounds, the Virage is not a featherweight, but its weight is distributed perfectly, 50:50, because the engine is pushed back toward the firewall and the transmission is rear-mounted. Aston Martin’s judicious selection of lightweight materials and a bonded-aluminum chassis have minimized the car’s mass and maximized its structural integrity and stiffness. The Volante feels as solid as the Coupe, and a shakedown on twisting canyon roads north of Los Angeles proved the mettle of the structure and suspension.

When driven aggressively, the Volante seems smaller than it is. The independent double-wishbone suspension—front and rear—works with the Adaptive Damping System (ADS) to adjust automatically and instantly to one of five stiffness settings, based on the road conditions. The settings range from maximum sport to maximum comfort. Pushing the ADS button on the dash enhances the firmer, sport settings.

Brakes have become the new automotive jewelry, with carbon-ceramic rotors and multipiston calipers affording the most street—and track—credibility. Massive Carbon Ceramic Matrix (CCM) rotors are standard equipment on the Volante and Coupe. They are nearly 30 pounds lighter than iron rotors and more fade free. Calipers are available in black, gray, red, or yellow. Also standard are 20-inch wheels on attractive five-spoke rims with a twin-prong design (10-spoke forged, diamond-turned wheels in a variety of finishes are optional) and Pirelli PZero tires.

High marks go to the interior design and layout of the Virage, which features simple and elegant planes and surfaces, good visibility out front and to the sides, and exemplary adjustable seats that provide ample support when driving becomes spirited but do not sacrifice any comfort.

Apparently, seven Swedish cows—or at least their epidermises—are employed for the cabin upholstery. The Bridge of Weir leather is French-stitched and covers nearly everything except for the control panels and hardware. Aston offers the interior trim in piano black, mahogany, walnut, tamo ash, bamboo, or metallic finishes. Personalized sill plaques are available for those who are prone to forgetting their names.

Kudos to Aston Martin for upgrading its often frustrating navigation system; a new Garmin-engineered unit is a vast improvement, with its enhanced interface, graphics, and safety-camera data. Overall, though, operation of the controls does not fall into the “immediately intuitive” category.

Owners of the Volante or Coupe—when not going it solo—will appreciate the intimacy their car confers. At the beginning of a night out with out-of-town friends, my companion and I pulled up to a Sunset Boulevard restaurant with the Volante’s top down and handed the valet the glass-and-polished-aluminum ECU key—an ornament that comes with most modern Aston Martins. Our guests arrived at the restaurant by taxi, prompting us to press the Volante’s rear seats into service after dinner. Out of necessity, the gentlemen sat in front, and the ladies in back—where there was just barely enough room for them. With their legs folded under them and their hair billowing in the wind while they sat as high as potentates in a parade car, our rear passengers were quite a spectacle. The Rapide is the Aston Martin for four; the Virage is, ultimately, a two-person sporting GT in a luxury wrapper.

While not a dedicated canyon carver, the Virage is in league with current GTs such as the Jaguar XKR in terms of performance and handling dynamics. Its higher price brings exotic lines, more cylinders, and greater exclusivity. With the top down, tweeters up, and Sport mode on, the Volante feels capable of evading the pursuit of a rival spy. It also seems ready to just fly down the road in pursuit of new adventure.