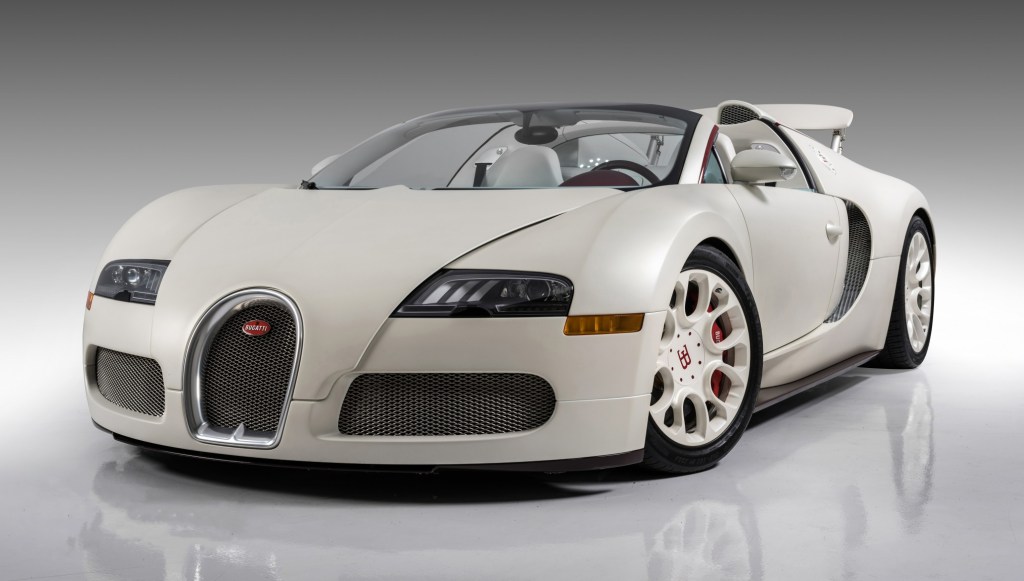 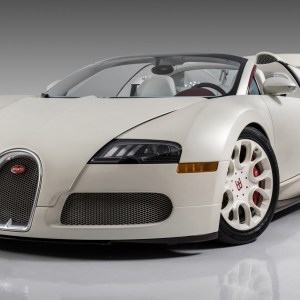 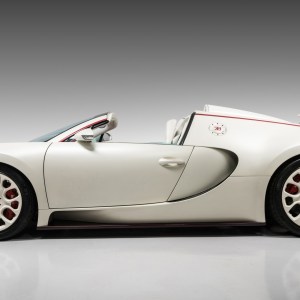 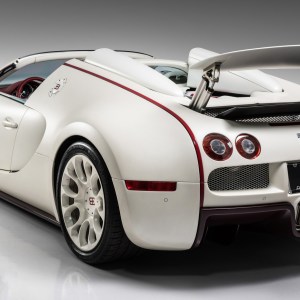 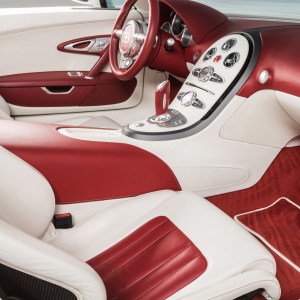 A knockout in both appearance and performance, a 2011 Bugatti Veyron 16.4 Grand Sport, formerly owned by Floyd Mayweather Jr. is entering the ring tomorrow at Barrett-Jackson’s 46th Annual Scottsdale Auction in Arizona. The pearl-white wonder had, at one time, been a part of the undefeated and currently retired boxing great’s vast automobile collection—an assemblage that reportedly has included more than 100 vehicles from one supplier alone.

On the block is one of the French marque’s Veyron variants introduced in 2009. Named after Pierre Veyron, a bygone Bugatti engineer and part of the driving duo that took first at the 1939 24 Hours of Le Mans, the supercar pays him high praise as one of the fastest production machines ever made. The Grand Sport, fit with a targa-style roof, opens up on the open road with a 1,000 hp, 8-liter W-16 quad-turbocharged engine (with 922 ft lbs of torque) mated to a 7-speed automatic transmission. The power train enables the convertible to cruise from zero to 60 mph in a sizzling 2.4 seconds and reach a top speed of about 254 mph (229 mph with the top down)—close competition to its sibling, the Bugatti Chiron, which can bolt to a blistering 261 mph. Keeping the Veyron’s velocity in check are carbon-fiber-reinforced, silicon carbide disc brakes that can bring it to a stop from a speed of 62 mph in 103 feet. In 2010, the manufacturer made it possible for new owners to tailor the paint and interior trim to personal taste, an offer the premier pugilist took advantage of as evidenced by the exterior’s pearly presentation. The inside is dressed in red leather upholstery and carbon-fiber detailing.

Out of the 405 total Veyron’s built, only 150 were of the Grand Sport version. And as a near-new example, the one on offer has only 1,668 miles on the odometer. With a serious seven-figure price tag when originally purchased, Mayweather’s ride should roll out of Scottsdale for more than before due to its prize-fighter provenance—a fact that will call for prospective buyers to take the gloves off when bidding begins.

Among the other leading lots of the auction (being held at WestWorld Scottsdale) are rocker Steven Tyler’s 2012 Hennessey Venom GT Spyder (with its proceeds going to charity), pop star Justin Bieber’s 2011 Ferrari 458 Italia, and the famed 1986 Ferrari Testarossa from the iconic cop show Miami Vice. Barrett-Jackson’s sale runs from January 14 through the 22. (barrett-jackson.com)