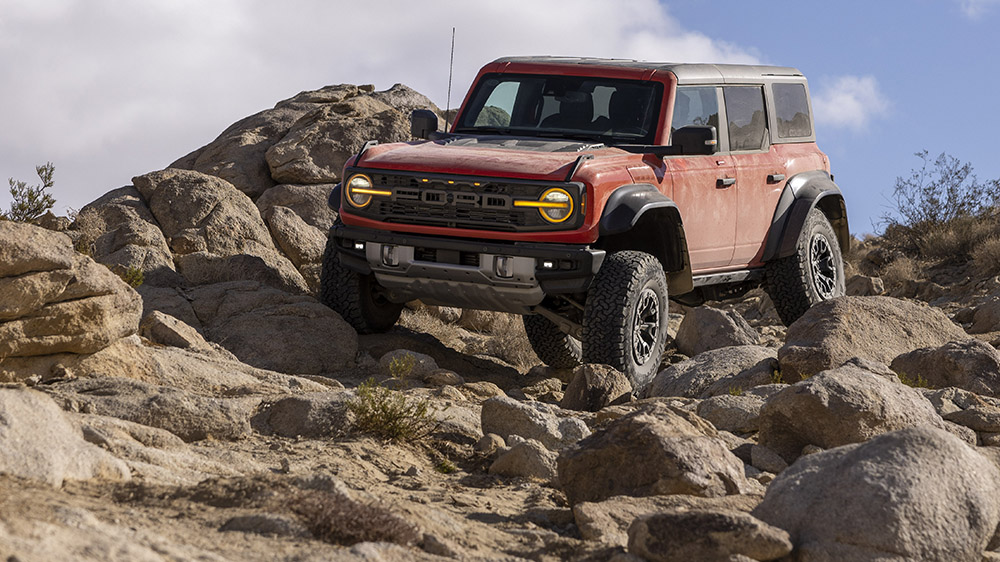 It took a few months, but we finally know just how powerful the Ford Bronco Raptor will be.

On Tuesday, the automaker’s CEO Jim Farley tweeted that the engine on the range-topping variant of the company’s popular SUV can churn out 418 hp. That figure is 18 horses more than the 400 the marque said it was aiming for when the vehicle was unveiled in late January.

Farley also revealed that the top-of-the-line Bronco’s twin-turbo 3.0-liter EcoBoost V-6 will deliver 440 ft lbs of torque. That makes the mill easily the most powerful among the sixth-generation Bronco’s three engine options. The other two choices are a turbo-charged 2.3-liter inline-four that produces 300 hp and 325 ft lbs of torque and a step-up twin-turbo V-6 that can produce up to 330 hp and 415 ft lbs of torque.

The idea for #BroncoRaptor was an Ultra4 racing-inspired Bronco built for high speed off-roading & extreme rock crawling.
The target was 400 horsepower.
Now it's official: 418hp + 440lbs-ft of torque!

Congrats to the @FordPerformance team for taking #BuiltWild to a new level! pic.twitter.com/l46WV8zjqF

The Raptor’s engine doesn’t just top the Bronco line, though. It also, as Motor1.com points out, gets it closer to its main competition: the Jeep Wrangler Rubicon 392. That SUV powertrain produces 470 horse and 470 ft lbs of torque, but it’s also got a V-8 at its heart, rather than a V-6. The Raptor’s power brings the Bronco within striking distance of the Wrangler Rubicon.

Of course, all that added strength—along with body modifications, upgraded suspension and huge 37-inch all-terrain tires—comes at a cost. Ford also revealed that its burly off-roader will get just 15 miles per gallon on city streets, 17 mpg on the highway and 15 mpg overall. That makes it downright fuel inefficient. Not only is the EPA-certified rating 12 mpg off what is considered average in 2022, its 5 mpg (or 25 percent) less than the most efficient Bronco—the base model two-door with a 2.3-liter inline-four. It is better than the Wrangler Rubicon 392’s combined rating of 14 mph, though.

Still, it’s hard to imagine that figure dissuading drivers from coveting the 2022 Bronco Raptor. Few off-roading enthusiasts, after all, buy an all-conquering 4×4 to save money at the pump. If it’s not enough to give you pause, you’ll have your chance to buy the top-of-the-line Bronco SUV later this summer when it finally goes on sale. It’ll start at $79,995, comfortably making it the most expensive version of the new Bronco. For now.