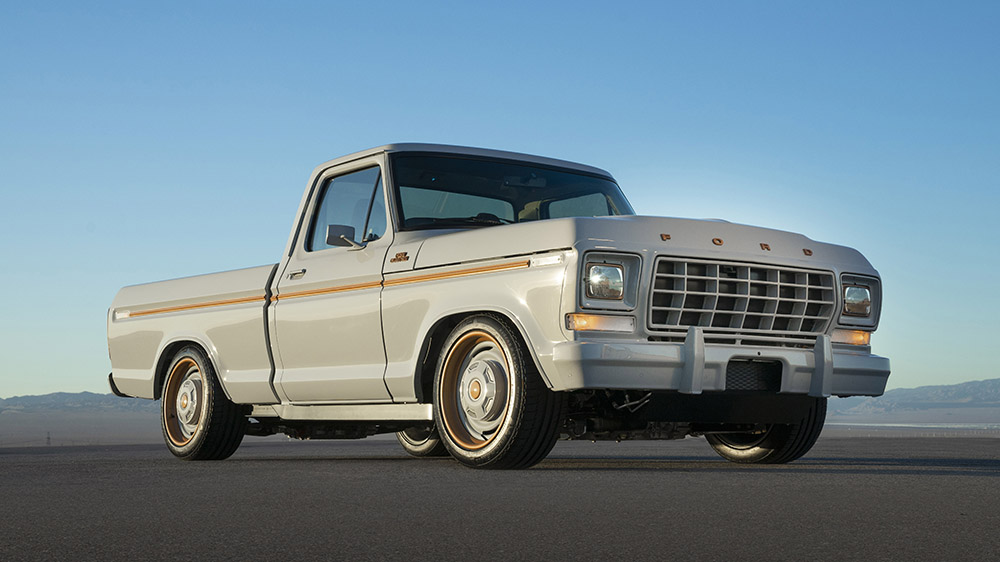 The Mustang isn’t the only Ford model getting an electric shock.

The Detroit automaker brought a concept vehicle based on its old-school F-100 pickup to this year’s SEMA show in Las Vegas. The F-100 Eluminator looks just like the 1978 version of the truck but is powered by the dual-motor electric powertrain found in the new Mustang Mach-E GT.

The reimagined F-100 is the handiwork of MLe Racecars and the Roadster Shop, both of whom wisely decided not to mess around too much with the truck’s vintage design. The exterior has been left basically untouched, with the exception of a new Avalanche Grey finish and some bold copper accents. It also rides on a set of 19-inch, three-piece wheels wrapped in Michelin Latitude sports tires. Less restraint was applied to the inside of the vehicle, where the original dashboard has been replaced with a billet aluminum number that features a minimalist digital gauge cluster and a 15.5-inch infotainment touchscreen just like the one found on the Mach-E.

Underneath the hood, things are radically different. The F-100 Eluminator is powered by twin front and rear electric traction motors. The two motors combine to pump out a very impressive 480 horses and 634 ft lbs of twist, according to a press release from the automaker. Ford didn’t reveal what the concept’s power source is, but because their performance specs are almost identical we imagine it’s pretty similar to the 88.0-kWh battery pack in the Mach-E GT.

As with most concepts, Ford is unlikely to put the F-100 Eluminator into production. But you’ll soon be able to build one of your own. The truck is really just an excuse to show off Ford’s new electric crate motor, also called the Eluminator, which is available now for $3,900. Unfortunately, it’s not as powerful as the one found in the concept, generating just 281 hp and 317 ft lbs of torque, and you’ll need to supply the battery pack. Still, it’s a great foundation for someone looking to electrify a beloved vehicle.

Inside the F-100 Eluminator  Ford

And if you don’t want to build your own electric Ford truck, you could just wait for the F-150 Lightning. It may not sport a retro design, but it will boast up to 563 horsepower and 775 ft lbs of near-instantaneous torque.

Check out more photos of the F-100 Eluminator below: